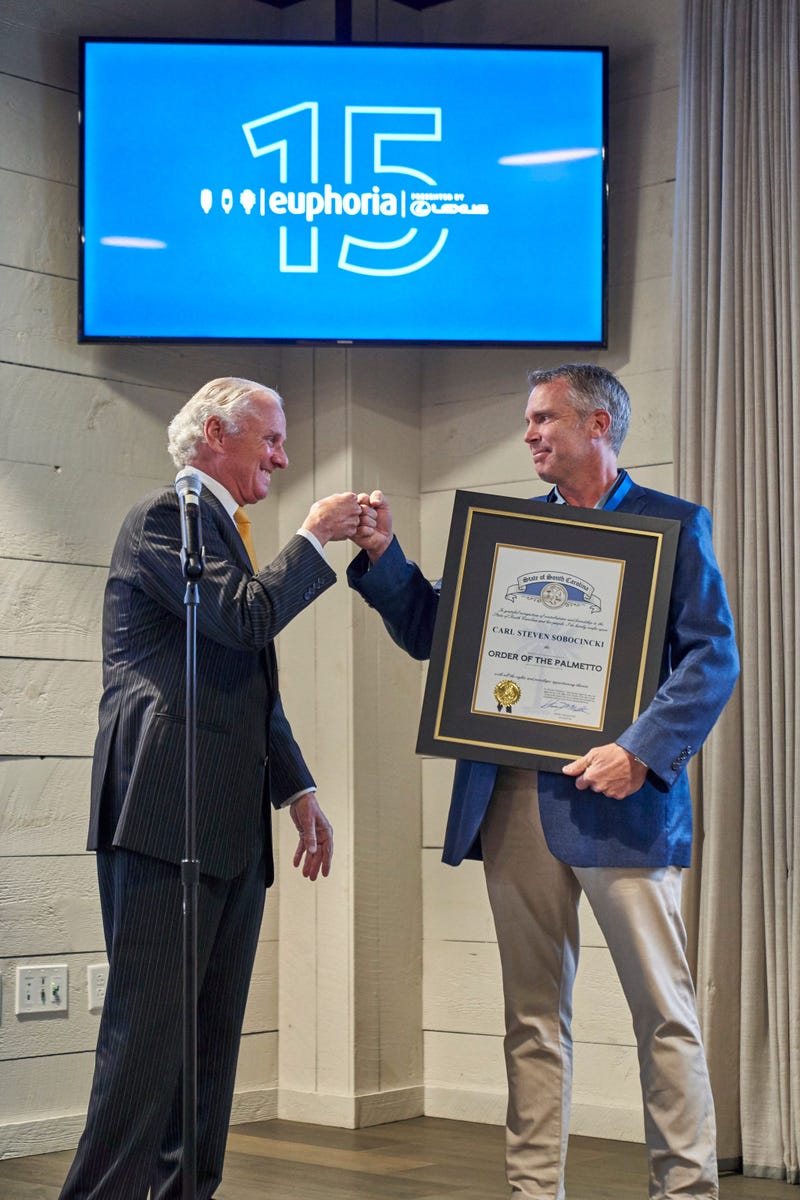 September 18, 2020- Carl Sobocinski, Owner of Table 301 Restaurant Group and co-founder of euphoria, was awarded the Order of the Palmetto by Governor Henry McMaster at the start of the festival’s 15th anniversary Thursday night in Greenville.

Carl has spearheaded Table 301 Restaurant Group’s growth and development over the past 22 years in Greenville, South Carolina which now includes 7 restaurants in its portfolio: Soby’s New South Cuisine, The Lazy Goat, NOSE DIVE Gastropub, Passerelle Bistro, Highway 301 Food Truck, Southern Pressed Juicery, and Table 301 Catering & Kitchen. Over the past 22 years, Table 301 Restaurant Group has donated more than $2 million to the community and thanks to Carl’s encouragement, Table 301 employees volunteer an average of 3,200 community service hours each year.

In 2005, Carl put a spotlight on Greenville’s emerging culinary and music scene with singer-songwriter Edwin McCain and started euphoria. Today this celebrated annual food, wine, and music festival draws thousands from across the country each September. Along with promoting the city of Greenville, the festival has funded grants for more than 44 local non-profit organizations.

“Carl laid so much of the groundwork for Greenville’s thriving restaurant scene, which is one of the main reasons we’ve been able to attract such great culinary talent to participate in our festival year after year,” says Morgan Allen, Executive Director of euphoria. “What started as a passion project for Carl has evolved into a highly-anticipated four-day festival that shines a spotlight on Greenville’s culinary arts scene with a huge economic impact in Greenville, not to mention raises money to pour back into our community.  We are incredibly grateful for Carl’s contributions to help grow euphoria, as well as the long list of independently-owned restaurants we are so fortunate to have here in the Upstate.”

Carl has been instrumental in a number of other community initiatives over the years - from going door to door (or farm to farm) asking local farmers to sell their produce on Main Street to start downtown Greenville’s “Saturday Farmer’s Market on Main Street” in 2003, to creating Brunch for a Cause which was designed to help victims of natural disasters like Hurricane Katrina and Harvey, and has raised more than $100,000 for the Red Cross since its inception after the 2005 Tsunami and most recently for the victims in the Bahamas after Hurricane Dorian.

When issues arise that affect the hospitality industry, others in the city look to Carl for leadership and direction. For instance, it was Carl who lobbied to change the laws to allow Sunday alcohol sales in restaurants. He spearheaded this change at a time when Soby’s wasn’t even open on Sundays, but he knew the importance and went door to door to get 10% of the registered voter’s signatures. Most recently, Carl has been working to address the rising costs of living downtown by leading a charge to help subsidize housing for hospitality workers. And throughout the pandemic, local and State officials have looked to Carl for his wisdom and insights to determine the best path forward for restaurant protocols.

“Carl represents the epitome of a highly effective, caring leader in the restaurant industry,” says John Durst, President and CEO of the South Carolina Restaurant and Lodging Association.  “We are extremely fortunate to have the benefit of his passion, experience and community-based service.  His recognition as a recipient of our state’s highest civilian honor, The Order of the Palmetto, is an unreservedly well-deserved acknowledgment of his extensive contributions, service and accomplishments.”