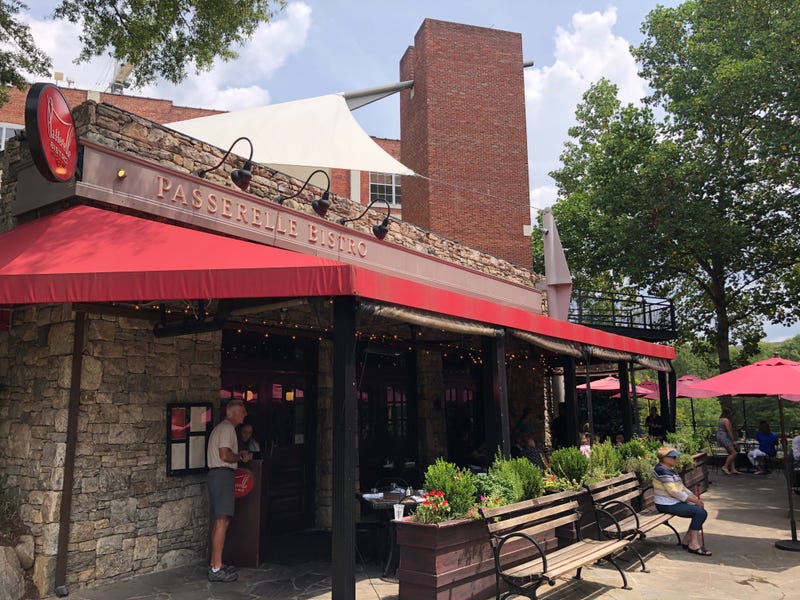 Passerelle Bistro – passerelle being a French word meaning “footbridge” – is aptly named given the French-inspired restaurant’s location in downtown Greenville.

The bistro’s outdoor dining area is right at the top of Falls Park, the Liberty Bridge spanning right in front of you.

As the bistro’s assistant manager Jerry Beck says, it’s a view that makes Passerelle one of the most romantic dining spots in town.

“We’ve probably got the best view in Greenville right now,” he explained during the post-lunch break, as diners inside the cool bistro sipped early afternoon glasses of wine.

Outside, with the heat of day in full force – 92 degrees, not a cloud in the sky – the breeze helped ease the temp a little. But really, if you’re going to dine at Passerelle, you want to come at night, ideally around sunset. You’ll get to see a full show of the sky changing colors, the people gathered below you in the park, the dogs running around, the birds swooping overhead. And when the sun finally sets, the patio will be aglow with strung lights that make you feel transported to some French countryside town.

“We’re a nice little French bistro, great French inspired food, atmosphere is incredible, and the weather’s been great – you’re never going to beat it when you got all that going for you,” Beck said.

Now that Restaurant Week is in full swing, Beck and the rest of the staff have been busy. Lots of running around, lots of coordination. But he wouldn’t have it any other way, and he said he’s confused why any restaurant wouldn’t partake.

“I honestly don’t see why you wouldn’t,” he said with a shrug.

“It brings us a ton more people,” Beck added. “Normally on, say, a Monday, we’d be a lot quieter. But with Restaurant Week, we were packed.”

Beck said it’s about showing off to new customers what the bistro is all about.

“The customers come in, they get to try a few things that we have. Instead of trying everything at normal price, they get a better value, try a few more things, and hopefully come back and see us next time.”

The best part about Restaurant Week, in Beck’s view, is that it allows more higher price point locations like Passerelle appeal to people who don’t typically shell out a chunk of cash on dinner. By bringing in these customers, it gives Passerelle the opportunity to become a new special dinner spot for those diners. That way, the next time they have a birthday, an anniversary, a graduation – they’ll think Passerelle.

“It gives them a chance to come out, try more things, and hopefully,” he said, “they’ll fall in love.”