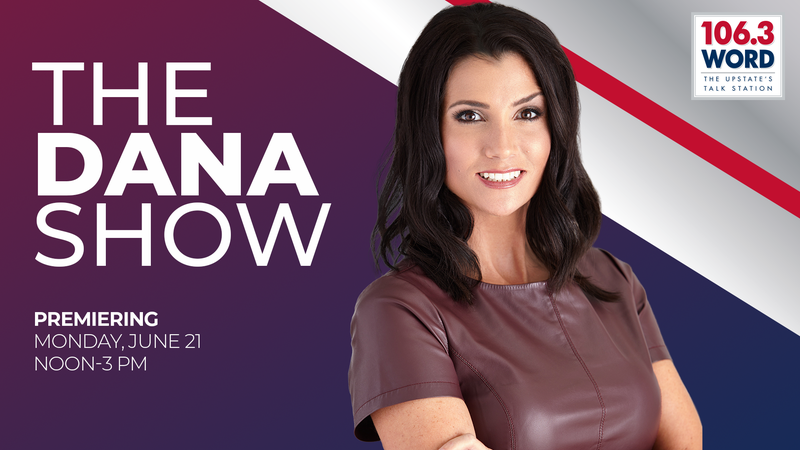 106.3 WORD is excited to announce that The Dana Show will premiere on Monday, June 21 from noon to 3 PM, replacing the weekday slot currently filled by The Rush Limbaugh Radio Show.

Her original brand of young, entertaining irreverence has found a fast-growing audience.

Dana is a next-generation talk show host; her funny and feisty personality has connected with talk listeners of all ages.

Dana is the author of two books, the national best-seller Hands Off My Gun: Defeating the Plot to Disarm America, which turned the tide in the gun control debate, and Flyover Nation: You Can’t Run a Country You’ve Never Been to, which predicted the coastal-flyover divide and sentiment that decided the 2016 election.  Her third book released in 2020, Grace Canceled: How Outrage is Destroying Lives, Ending Debate, and Endangering Democracy, evaluates the current Cancel Culture taking over America.

Dana appears regularly on Fox News and has provided election analysis for ABC, CNN, Fox; she’s appeared on HBO and has co-hosted “The View.” A Second Amendment advocate for well over a decade, Dana is one of the nation’s premier voices for gun rights, representing gun owners on CNN’s infamous town hall on gun control in the wake of the Parkland tragedy.

Dana is a Christian, wife, mother, and dog lover; when not behind the mic, camera, or traveling around the country speaking on various issues, Dana enjoys playing Call of Duty, reading historical biographies, and darkwave music. ​