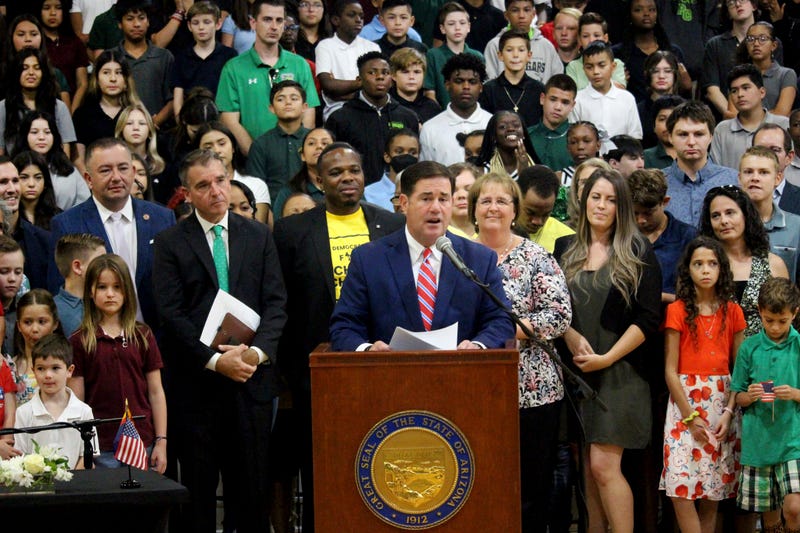 PHOENIX (AP) — All Arizona parents now can use state tax money to send their children to private or religious schools or pay homeschooling costs after an effort by public school advocates to block a massive expansion of the state's private school voucher law failed to collect enough signatures to block it.

Arizona Secretary of State Katie Hobbs announced Friday that her office's review of signatures turned in a week ago to refer the expansion to the ballot came up short of the nearly 119,000 that were needed. Hobbs is a Democrat running for governor who opposed the plan.

Republican Gov. Doug Ducey championed the plan and signed it into law in July. He celebrated on Twitter, saying “Let's Roll!” and “Parents Prevail.”

Arizona now has the nation's most expansive private school voucher law. It allows parents of the more than 1.2 million school-age children to get 90% of the state money that would normally go to their local public school and use it for private or other school costs. That amounts to about $7,000 for a non-disabled student.

The effort to block the expansion passed by the Republican-controlled Legislature over Democratic opposition was organized by Save Our Schools Arizona, a grassroots group of public school teachers, parents and public education advocates who blocked a similar expansion in 2017. Voters then overwhelmingly rejected the law in the 2018 election.

The group turned in what they estimated was nearly 144,000 signatures on Sept. 23, a day before the new law was to take effect, and that temporarily blocked it. Initial reviews by Hobbs' office showed they turned in far fewer signatures than the nearly 119,000 needed to refer it to the ballot the state's constitution's referendum provision and that was confirmed Friday. The automatic hold was then removed.

“Today is a new day in Arizona!," Christine Accurso, who led an effort to dissuade people from signing the petitions and whose children currently receive vouchers, said in a statement. "Parents are rightly in control of their children’s future!”

Arizona already had the most expansive education options in the nation, with public and charter school, a tax credit system that helps pay private schooling costs and the voucher system, technically called Empowerment Scholarship Accounts.

Opponents of the voucher system argue it siphons cash from an underfunded public school system and allows parents who already can afford and currently send their children to private schools to get state money for those costs. They estimate that the K-12 education system could see as much as $1 billion redirected to private schools in the coming years.

Voucher supporters say it gives parents choice to send their children to the best school possible. And Ducey argues that public schools are now well-funded, pointing to billions of dollars in new education funding in recent years.

An estimated 60,000 current private students and about 38,000 being homeschooled are immediately eligible, although a small number currently get vouchers. In addition, all 1.1 million students who attend traditional district and charter schools also now qualify to leave their public schools and get money to go to private schools. About a third already qualify, but only about 12,000 students statewide currently use the system.

The state Superintendent of Public Instruction, Democrat Kathy Hoffman, announced Friday that her office would immediately begin processing more than 12,000 new applications received in the past six weeks. About 75% of those students never attended public school in Arizona, so they are likely current private school students. Once approved, money will be put into the child's account.

The voucher system started in 2011 with a small program that only applied to disabled children, who can receive up to $40,000 a year for specialized therapy. The Republican-controlled Legislature expanded it repeatedly in the past decade. Before the universal expansion took effect it also covered students living on American Indian reservations, attending low-performing public schools and several other groups.

The nearly 12,000 current students were awarded $196 million in the last school year, according to data from the Arizona Department of Education.

The Legislature’s budget analysts estimated that the new expansion will cost $125 million in two years, but they acknowledged that the figures are highly speculative and based on new costs, not the losses from public schools. Many private school students get money from a tax credit program, but those payments average much less than vouchers, so many are likely to switch..

On Wednesday, Ducey appeared at a Capitol rally where parents urged Hobbs to speed up the petition review. He criticized Hobbs for not moving quickly enough to certify that the referendum effort came up short, saying “now is not the time to play politics.”

That came despite his own delays in signing the bill that cut the amount of time voucher foes had to collect signatures from 90 to 80 days. By law, Hobbs had 20 days to process the petitions, just like he had 10 days after the Legislature adjourned in late June to sign bills on this desk.