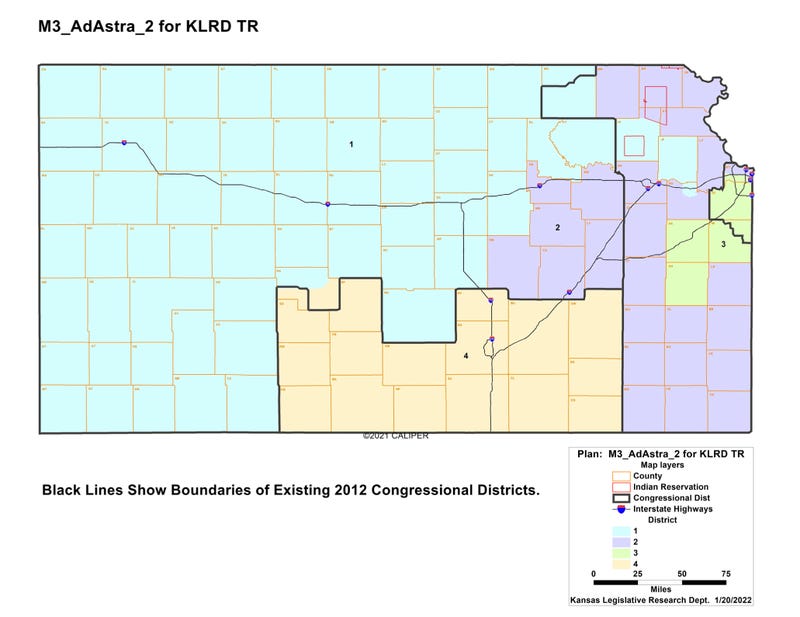 TOPEKA, Kan. (AP) — Republicans on Wednesday improved their chances of flipping the only Kansas congressional seat held by a Democrat, when the state’s highest court upheld the new congressional map they drew.

The map slices territory out of the Kansas City-area district Democratic U.S. Rep. Sharice Davids has carried by a 2-to-1 margin and replaces it with three counties that former President Donald Trump carried by more than 40 percentage points in 2020. Republicans argued that Davids still would have carried the new district two years ago and that the map was a fair way to rebalance the number of residents in each of the state's four districts after 10 years of population shifts.

Attorneys for the Kansas voters and voting rights group that challenged the map urged the state Supreme Court to declare that broad language about “inalienable natural rights” and “equal protection and benefits” in the state's bill of rights bars overly partisan and racial gerrymandering .

But the justices apparently didn't see it that way.

Their decision bucks what has been a trend in a small but growing number of states since the conservative-leaning U.S. Supreme Court ruled in a 5-4 decision in 2019 that complaints about partisan gerrymandering are political issues and not for the federal courts to resolve.

“The only remedy for people wanting to challenge maps is in state courts,” said Michael Li, an attorney and redistricting expert for the nonpartisan Brennan Center for Justice. “Kansas is potentially the only one that may say it isn't covered by the state constitution.”

However, the Kansas court's reasoning is not yet clear. Its opinion was two paragraphs long, saying only that the voters and voting rights group challenging the map “have not prevailed on their claims” that the map violated the state constitution and that a full opinion would come later.

The brief decision was written by Justice Caleb Stegall, who is seen as the most conservative of the court’s seven justices, five of whom were appointed by Democratic governors. During arguments from attorneys on Monday, he questioned whether anyone could clearly define improper partisan gerrymandering.

Lawsuits over new congressional district lines have proliferated across the U.S., with Republicans looking to recapture a U.S. House majority in this year’s midterm elections. Congressional maps in at least 17 states have inspired lawsuits, according to the Brennan Center.

In Kansas, the Republican-controlled Legislature enacted the map over Democratic Gov. Laura Kelly's veto, and Davids said Wednesday that new district lines resulted from “rushed hearings” and “back-room deals.” Her likely GOP opponent, Amanda Adkins, said in a statement that the new map "is evidence that our democratic process works.”

Kansas Attorney General Derek Schmidt, a Republican running for governor, hailed the ruling as a victory for “the public’s right to establish new districts through their elected representatives.”

In the past, Kansas congressional district lines have been reviewed by federal judges and not the state Supreme Court. The state’s solicitor general, appointed by Schmidt, argued that because the state constitution doesn’t specifically mention gerrymandering or congressional redistricting, the Kansas Supreme Court should reject the legal challenges.

Democrats worried that the decision gives unfettered power to the Legislature, which almost always has had GOP majorities.

They argued that not only was the map drawn to help Republicans unseat Davids in the 3rd District, but that it also diluted the political clout of Black and Latino voters. Twenty voters and voting-rights group Loud Light filed three lawsuits that were consolidated into one, and a lower court sided with them.

“It appears that the Kansas Supreme Court just declared all political power is inherent in the Republican Party, not the people,” he said.

The map also moved the liberal northeastern Kansas city of Lawrence — a Democratic stronghold that is home to the main University of Kansas campus and is only about 40 miles (64 kilometers) west of Kansas City — out of the 2nd District. Instead, the city of 95,000 has been added to the already sprawling 1st District, which is dominated by small conservative communities in central and western Kansas.

In a separate ruling, the state Supreme Court also upheld maps drawn by Republicans for legislative districts that are expected to preserve the GOP's supermajorities in both chambers.