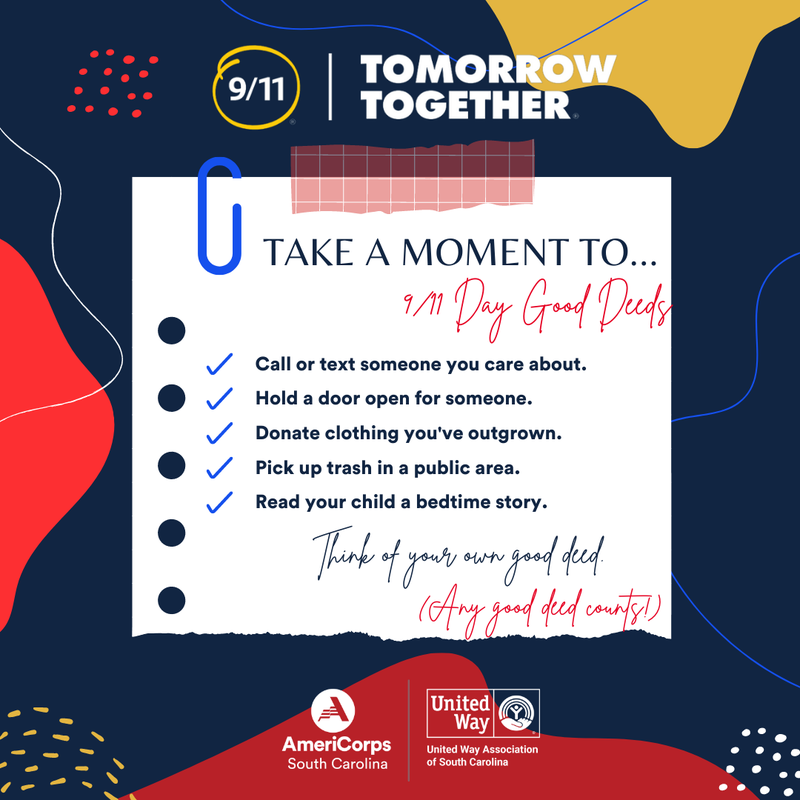 Press Release from the Governor's Office:

Columbia, SC, September 10, 2021 — In addition to a worldwide PSA campaign that launched September 1, 2021 promoting a return to a “state of unitedness” across America, that unified companies all across the nation in an initiative for; hunger relief, education, and other programs, Governor McMaster has shown his support by issuing a statewide proclamation declaring September 11th as 9/11 Day of Service. AmeriCorps SC is the supporting agency overseeing National and local service efforts in South Carolina.

The proclamation is a tribute to the 20th anniversary of 9/11 to honor hundreds of thousands of brave men and women who continue to serve in our nation’s armed forces and to honor the commitment and sacrifices of those killed, injured or who lost someone in the attack on September 11, 2001. The proclamation highlights the importance of volunteerism, national service, and challenges South Carolinians to find ways to give back to their community on the anniversary of a day that will always shadow a great loss in all American’s minds.

Despite the current virtual climate, AmeriCorps SC, has partnered with 9/11Day.org in support of the Shine A Light initiative. This initiative gives the opportunity for any individual to participate in 9/11 Day of Service. 9/11Day is hosting an online platform where individuals can pick a “good deed” to use as their act of service. External Affairs Manager, Megan Hobbs, from AmeriCorps SC told us, “Having access to resources that allow us to participate in service acts from the safety of our home is a game changer. It seems that the perception of an act of service must be a grand gesture, when, it doesn’t. An act of service is simply a good deed. Something as simple as holding the door for a stranger or cleaning out your closet and donating your clothes.” Shine A Light has a platform available online at 911day.org with a built in “good deed” generator if you find yourself puzzled and in need of some ideas on 9/11.