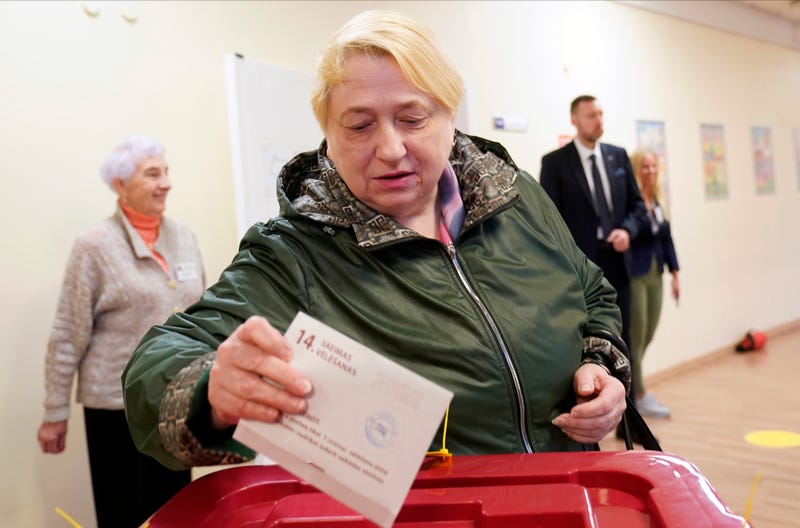 HELSINKI (AP) — Latvia held a general election Saturday amid divisions over Russia's attack on Ukraine among the Baltic country’s sizable ethnic-Russian minority. An exit poll predicted that the center-right will win the most votes but whoever forms the next government will face huge war-induced energy concerns.

A joint exit poll forecast that center-right New Unity party of Prime Minister Krisjanis Karins would win the election, capturing 22.5% of the vote. The poll was done by the Riga Stradins University, the SKDSA research center. the LETA newswire, Latvian Television and Latvian Radio.

The poll also predicted that a new centrist party that favors green development — United List — would be second with 11.5% of the vote and the opposition Greens and Farmers Union would come in third with 10.9% support. Only eight parties are predicted to pass the 5% barrier and secure representation at the 100-seat Saeima legislature.

A total of 19 parties had over 1,800 candidates running in the election. Official results are expected Sunday morning.

Initial voter turnout was 59%, the Central Election Committee said, an increase from 54.5% in the 2018 election.

Karins, who became head of Latvia's government in January 2019, currently leads a four-party minority coalition that along with New Unity includes the center-right National Alliance, the centrist Development/For!, and the Conservatives.

Karins, a 57-year-old dual Latvian-U.S. citizen born in Wilmington, Delaware, told Latvian media that it would be easiest to continue with the same coalition government if New Unity wins. He has excluded any cooperation with pro-Kremlin parties.

Support for parties catering to Latvia's ethnic-Russian minority, who make up over 25% of Latvia's 1.9 million people, is expected to be mixed; some loyal voters have abandoned them since Russia's Feb. 24 invasion of Ukraine.

This election is likely to be the death knell for the opposition Harmony party, whose popularity has steadily declined. The Moscow-friendly party traditionally served as an umbrella for most of Latvia’s Russian-speaking voters, including Belarusians and Ukrainians. In the 2018 election, Harmony received almost 20% of the vote, the most of any single party, but was excluded by other parties from entering the government.

However, Harmony's immediate and staunch opposition to the Russian invasion of Ukraine caused many voters who still back Russian President Vladimir Putin to desert it. Those opposed to the war, meanwhile, tended to move toward Latvia’s mainstream parties, who condemned the invasion.

“I think the Russophonic part of the population is very fragmented,” Pauls Raudseps, a columnist at the Latvian news magazine IR, told The Associated Press. “You can’t say it’s unified on anything. Some part is pro-Putin. But what we’ve seen is that the war in general has changed attitudes. And it has happened fairly rapidly.”

Long lines were reported outside polling stations in several places Saturday, including the capital, Riga. Many voters said Russia’s invasion of Ukraine affected their attitudes.

“People are getting more active, and as you see, there is a queue already. So, hopefully some of the pro-Russians have switched to the more European parties now,” IT engineer Ratios Shovels, 38, said at a Riga district polling place.

Elena Dadukina, a 43-year-old lawyer said, said she wasn't sure if the healthy turnout was "due to the war or whether people want greater responsibility in choosing their candidates because of how they will influence our domestic politics.”

Since Russia's war on Ukraine started in February, Latvian officials have banned Russians from entering the country with tourist visas and dismantled a prominent Soviet monument in Riga.

Latvia, which joined the European Union and NATO in 2004, also plans to reintroduce military conscription next year after a hiatus of over 15 years.

Follow AP's coverage of the war in Ukraine at https://apnews.com/hub/russia-ukraine