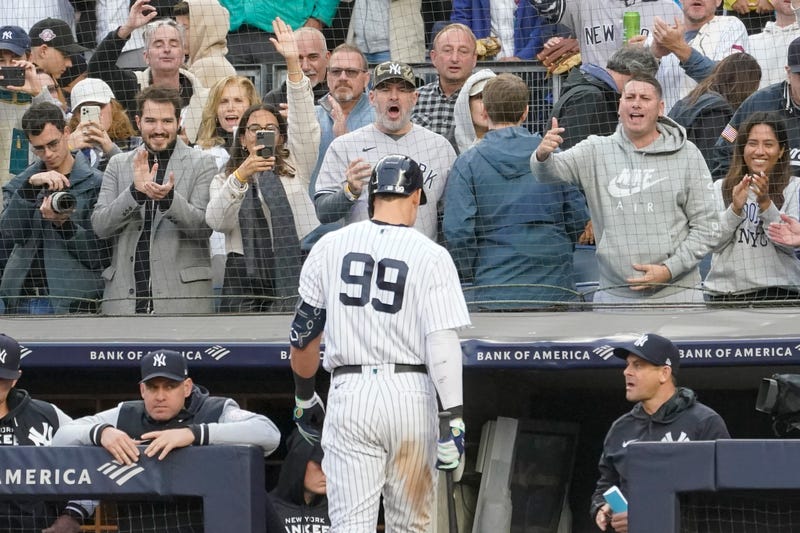 NEW YORK (AP) — The numbers were aligned for Aaron Judge. The pitches were not.

Judge remained at 61 home runs on the 61st anniversary of Roger Maris' 61st — he even came to the plate at the exact time Maris went deep.

Just eight of 25 Baltimore's pitches to Judge were strikes. He walked twice and was hit by a pitch on an 0-for-2 afternoon, sparking a three-run first and a four-run seventh in the New York Yankees' 8-0 rout of the Baltimore Orioles on Saturday.

“We know we got to capitalize on that. Otherwise, they're going to keep on doing it,” said Giancarlo Stanton, whose 447-foot drive into the left-field bleachers capped the first. “I think they will either way, but it's a good extra punch when we do capitalize.”

Judge was grazed on the left arm by a cutter from Austin Voth (5-4) leading off the first, walked in the second and struck out on a full-count curveball in the fourth — at 2:43 p.m., 61 years to the minute when Maris hit his 61st off Boston’s Tracy Stallard across the street at old Yankee Stadium on Oct. 1, 1961.

Against Spenser Watkins, he walked starting in the seventh and struck out on a changeup in the eighth.

“That's probably a little bit weird for every pitcher,” Boone said. “You're striking that balance between `I want to attack him,' but `It's the best hitter in the world.'”

Fans in the rowd of 45,428 booed every ball and chanted profanely at Orioles pitchers.

“It was pretty loud. Of course I heard it,” Watkins said. “It’s just Yankees fans.”

Judge is in contention to become the first Triple Crown winner in a decade. He leads in RBIs with 130 and at .313 is second in batting to Minnesota’s Luis Arraez, and also is tops with 110 walks.

“There’s no bigger stage and there’s no tougher place to do it,” Stanton said. “He’s at the top of the top and he’s made it look easy.”

Cortes got 19 swings and misses among 93 pitches. He lowered his ERA to 2.48 ERA and would be seventh in the AL except he is 3 2/3 innings shy of qualifying. He got a standing ovation when he walked back to the dugout after his last pitch and tipped his cap to fans.

With second baseman Gleyber Torres moved to right as part of a four-man outfield — and waving to fans in the seats behind him — Cortes used his hesitation delivery to fan Ryan Mountcastle ending the sixth inning.

“I do it on the spot," Cortes said. "I don't really know what I'm doing until it happens.”

Jacob Barnes finished with two-hit relief in his Yankees debut, completing New York’s 16th shutout, its most since 1998.

Kyle Higashioka had three of New York's 14 hits, including his ninth home run, and Torres and Josh Donaldson had two RBIs each.

Voth gave up four runs and seven hits in five innings for the surprising Orioles (81-77), who following a 110-loss season remained in postseason contention until mathematically eliminated by Seattle’s late-night win Friday.

“I get it. They want to see something special. It’s a cool moment," he said. "We’re not trying to walk him. We’re trying to pitch him carefully.”

Yankees: LHP Zack Britton was put on the 60-day IL, ending his season, his comeback from Tommy John surgery cut short after just three relief appearances because of arm fatigue. New York selected the contract of Barnes from Triple-A Scranton/Wilkes-Barre. ... INF-OF Matt Carpenter, sidelined since breaking his left toot on Aug. 8, ran on the field and will be among players reporting to training camp for Double-A Somerset. Boone anticipates Carpenter being available for the postseason as a pinch-hitter or designated hitter. ... RHP Frankie Montas, sidelined since Sept. 16 by inflammation in his pitching shoulder, has resumed throwing but may not be available until after the Division Series.

RHP Chi Chi González will be brought up from Triple-A to make his Yankees debut and start against Baltimore RHP Kyle Bradish (4-7, 5.11) on Sunday. González made four appearances this season for Minnesota and Milwaukee. Luis Severino was pushed back to Monday, with Gerrit Cole and Jameson Taillon starting in Tuesday's doubleheader and Domingo Germán on Wednesday.