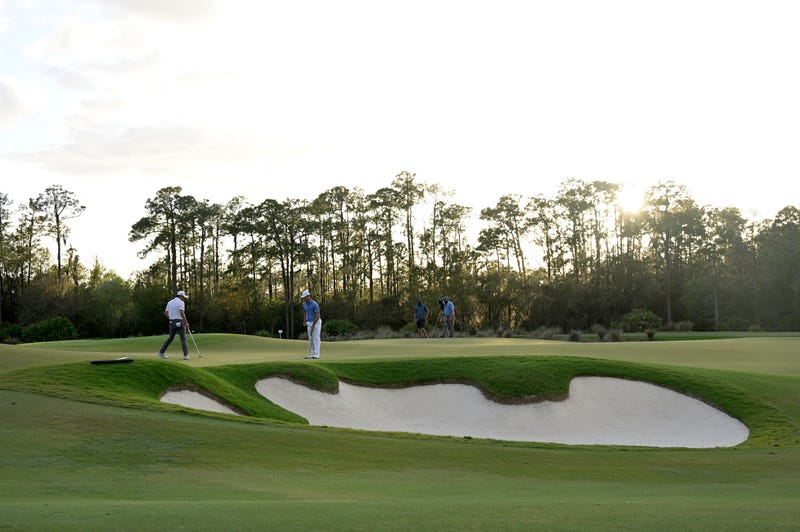 BRADENTON, Fla. (AP) — The latest World Golf Championship event has gone to nine venues with five title names since it began in 1999. What hasn't changed is a field that pulls in players from all over the world, some of whom have next to no name recognition.

Trevor Simsby took that to another level last week at the Workday Championship.

He had never played a PGA Tour event. A member of the Asian Tour, the 28-year-old Californian had not played on any recognized tour in a full year because of the COVID-19 pandemic.

And then he had a week to remember.

Along with making a hole-in-one on Saturday, he tied for 37th to finish ahead of Dustin Johnson and Xander Schauffele. He earned $59,000, more than he had made in 21 events during his rookie year in Asia.

“I think I handled everything pretty well,” Simsby said. “It was a huge stage and a lot of pressure.”

Most bizarre is how Simsby even got into the field for the $10.5 million event at The Concession.

Simsby finished his college career at Washington and tried the Korn Ferry Tour and the PGA Tour Latinoamerica without any success. He missed the cut in 14 out of the 16 events he played on the Korn Ferry, and he didn't cash a check in any of the six Latinoamerica events.

That's what got him into the field at the Malaysian Open at the start of 2020, and he won a three-man playoff. And then the pandemic hit. The Asian Tour was only four tournaments into the season when golf was shut down. The Workday Championship with its $10.5 million purse takes the top two from the previous year's money list on the Asian Tour.

And then he had nowhere to play.

“I thought we would go back (to Asia) by the end of the summer," he said. “This one was kind of on the radar after the Malaysian Open, knowing I might get into something like this.”

He thinks he played five times since winning the Malaysian Open. He just can't remember where.

Simsby was going to play the Nevada Open until he got sick. He failed to qualify for the Colorado Open. And then a week before going to the World Golf Championship, he played the Bayonet Championship in Monterey, California, withdrawing after one round because his elbow was sore and he didn't want to risk it.

“I got here on Monday and I just had a blast just trying to figure out this golf course, trying to pick it apart and also seeing every guy that I’ve looked up to growing up,” Simsby said. "I was a slow starter in high school, slow starter in college and professional golf has been a tough road. I feel I've got more of a hold on it going forward.

“I can take a lot of positives from this week."

This wouldn't be the first time he was in the right place at the right time. As a 15-year-old in San Diego, he was a standard bearer in the 2008 U.S. Open at Torrey Pines. He was in the group Sunday with Rocco Mediate, who wound up losing to Tiger Woods in a playoff the next day.

“We’re supposed to follow the group to the scoring area after it’s done, but we stood behind the green and waited for Tiger because we knew it was close,” he said. “So we were there for that final putt when he got into a playoff. I think that was the loudest roar I’ve ever heard.”

For the second straight year, men and women will be competing on the same course at the same time for the same amount of money. ISPS Handa sponsored the Vic Open last year. It was canceled this year because of COVID-19.

Now the company is sponsoring the ISPS Handa World Invitational in Northern Ireland, played over two courses (Galgorm Castle and Massereene). And for the first time, the tournament will be tri-sanctioned by the European Tour, LPGA and Ladies European Tour. The 144-player women’s field will be divided evenly by the two tours.

The $2.35 million purse will be divided equally.

The field is sure to be missing top players, however. The tournament is July 28 through Aug. 1, which is the same weekend the men are competing at the Olympics in Tokyo. The women’s Olympic competition is the following week.

Even so, the men’s and women’s tournaments will offer official points for all three tours, and for Ryder Cup and Solheim Cup points.

There was one difference.

The LPGA Tour had five weeks between the first and second tournaments of the year. In 2000, Annika won the Welch's/Circle K Championship in Tucson. The following week, Charlotta won the Standard Register Ping in Phoenix.

The Sorenstam sisters wound up with 73 victories between them — 72 for Annika. The Korda sisters now have 10 victories, with six for Jessica and four for Nelly.

A modern record is at stake this week at Bay Hill, if it already hasn't been matched.

Nick Price won at Colonial in 1994 in the 21st week of the season, making him the first multiple winner that year. That was the longest it has taken for someone to win at least twice since 1969, when the PGA Tour broke from the PGA of America.

Through 20 weeks this season, there have been 20 winners, so the record can be matched if the Arnold Palmer Invitational winner gets his first title of the season.

However, a few hours before Collin Morikawa won the Workday Championship, Branden Grace won the Puerto Rico Open. That would make 21 winners in 21 weeks. Then again, the Puerto Rico field had no one who had already won this year.

The USGA is taking the U.S. Women’s Amateur Four-Ball Championship to Puerto Rico next year, the first time a USGA event is held outside the mainland in a U.S. territory. It will be held at Grand Reserve Golf Club, site of this year’s Puerto Rico Open. ... International players had won five consecutive PGA Tour events in Florida until Collin Morikawa won the World Golf Championship at The Concession.

STAT OF THE WEEK

“At least we were not talking about slow play. Those meetings would have gone endlessly.” — Anirban Lahiri, on the many Player Advisory Council conference calls when the PGA Tour was trying to return from the pandemic.