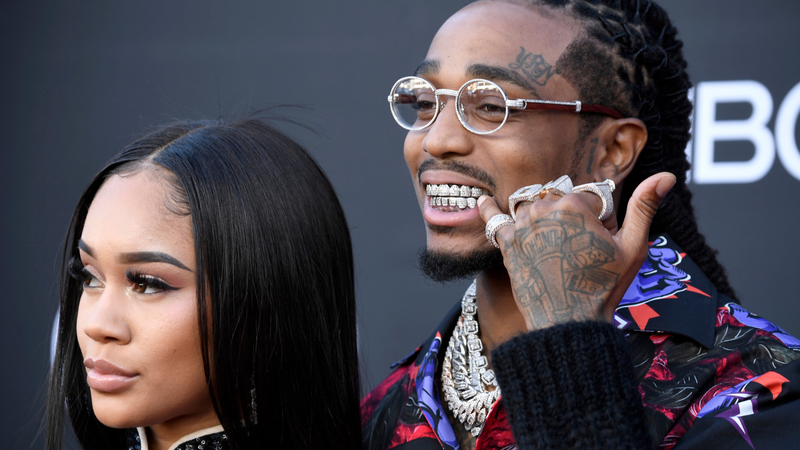 TMZ has obtained footage of an alleged altercation on an elevator between former couple, Saweetie and Quavo.

According to TMZ, the fight took place at an apartment complex in North Hollywood, sometime in 2020. You can see in the nearly two-minute video that hands were thrown with luggage being snatched by both parties. Quavo then grabs her by the arm into the elevator, and they both quickly end up on the floor. Saweetie remains on the floor and out of camera view. Quavo continues to look down on his then-partner, but doesn’t help her up. Later on the elevator door opens and an unknown person is seen waiting, but doesn’t get on. When the door opens again, Quavo takes the luggage to hold the door while Saweetie gathers herself from the floor and exits. Any potential injuries are currently unknown and the video has no audio.

Just weeks ago, the "Back To The Streets" rapper took to Twitter to announce the breakup, saying, "I’m single. I’ve endured too much betrayal and hurt behind the scenes for a false narrative to be circulating that degrades my character. Presents don’t band aid scars and the love isn’t real when the intimacy is given to other women." She also continued to express that she'd "emotionally checked out a long time ago and have walked away with a deep sense of peace and freedom."

It wasn't long before the "MotorSport" rapper chimed in to say, "I had love for you and disappointed you did all that. You are not the woman I thought you were. I wish you nothing but the best." To which Saweetie curtly responded, "take care."

WATCH MORE: Saweetie on a Cardi B collab: That would tear the club up