Marshawn Lynch continues to make moves in the sports world.

On Monday, Lynch and Seattle rapper Macklemore were announced as part of the investing group of the NHL’s new Seattle Kraken franchise, which is wrapping up its inaugural regular season. Lynch became a larger-than-life figure during his six-season run in Seattle from 2010-15.

Upon announcing the news, the Kraken shared a hilarious video of Marshawn spinning donuts in a Zamboni.

We tossed new #SeaKraken investor, @moneylynch, the keys to the zamboni and let's just say he went full Beast Mode on the ice! 😂 pic.twitter.com/lMRdolwz2I

Sideshows are nothing new to the Oakland native, but this was probably his first time spinning tight ones on the ice.

This isn’t the first time Marshawn made headlines for his vehicular escapades. Back in 2006, in the midst of the Bay Area’s Hyphy Movement, Marshawn commandeered a golf cart as he whipped around the football field following a win.

This also marks Lynch’s second sports ownership position, as he and celebrity chef Roy Choi own the Bay Area Panthers, who play in San Jose and broadcast their games on 95.7 The Game.

Lynch and Seattle will always have a special connection and it seems like he’ll be around for years to come. 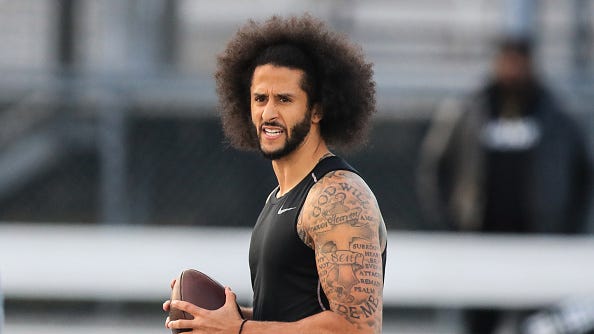 Colin Kaepernick willing to take backup QB job: 'I have to find my way back in'