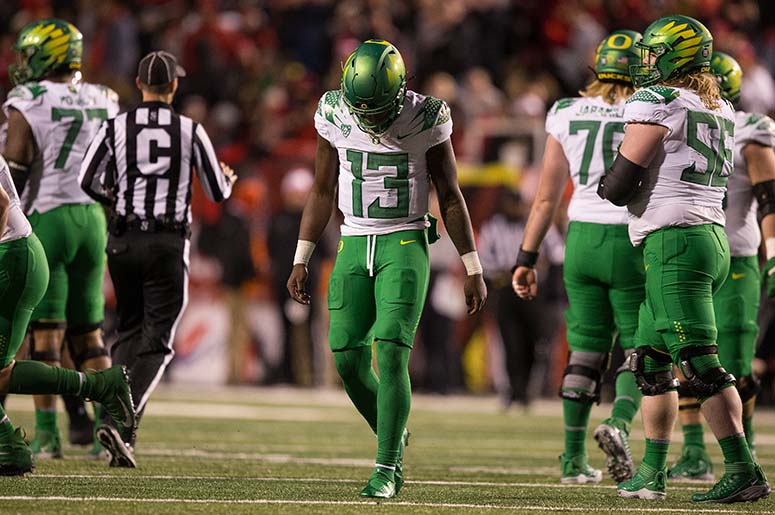 The Oregon Ducks went into Saturday’s contest versus Utah as surprising three-point underdogs on the road. Many Northwest fans figured it was an East coast bias, as the No. 3 team in the country was looking solid after stumbling early in the season to Stanford. But the Vegas books must have had a better understanding than the fans (shocker…). The Ducks fell in devastating fashion against the Utes, 38-7.

It was clear after the first few possessions that Utah’s offense was determined to avoid Kayvon Thibodeaux at all costs. It was also obvious that Utah had no intention of out dueling Oregon in any capacity. The Utes delivered a combination of apt running attacks and well timed play action to bring a sold-out home crowd to a roar.

But what really acted as the ultimate momentum shift was the punt return before half time. With just under a two minutes to spare, Britain Covey took a return 78 yards to the house and put Utah up 28-0 at half. After that point, any chance of Oregon making a comeback had fizzled out, even after Anthony Brown’s TD strike in the 3rd quarter.

UTAH 78-YARD PUNT RETURN TO END THE HALF 🤯

Oregon’s college football playoff chances are non-existent at this point. They are a two-loss Pac-12 team that is dealing with injury issues, and are not even guaranteed to make their conference title game, at this point.

Consider expectations for this team at the beginning of the season. Many believed a young roster and difficult road test against Ohio State would delegate the Ducks to another Pac-12 title appearance, at best. And though expectations have changed, this team still has much to fight for to finish out the season.