The talk of the entire 2023 high school football recruiting class is Arch Manning, nephew to both Peyton and Eli and grandson of Archie.

As the No. 1 recruit in the country, it's no secret that every school in the nation would do whatever it takes to bring you onto campus. Some of the names that have been a part of the "Arch Manning sweepstakes" include his uncle Eli's alma mater Ole Miss, Clemson and even Virginia, a school more renowned for its academic prowess rather than for its football program. However, a new report indicates that two other well-known schools have emerged as the leading candidates for the next great Manning quarterback.

In a report from On3 college football recruiting insider Chad Simmons, sources are constantly bringing up two programs that have distinguished themselves from the others. Who are those schools you may ask? The programs that Simmons names include the reigning College Football Playoff National Champion Georgia Bulldogs and the Texas Longhorns--with Alabama as the odd team out.

“When talking to different sources close to this recruitment, I have started to hear more about Georgia and Texas,” the report read.

“Alabama is still Alabama — and Nick Saban, Bill O’Brien and Pete Golding have all been involved — but there has been a little more chatter around the Bulldogs and Longhorns in recent weeks.”

The 6’4,” 215-pound QB has already taken visits to both Texas and Georgia, with the Longhorns being the recent favorite amongst many recruiting insiders. Even though former five-star recruit Quinn Ewers is slated to compete for the starting job this upcoming season, the Longhorns have yet to offer any other quarterback in the class of 2023 other than Manning--a clear sign of the belief the program has in Manning.

Arch also seems very high on the Longhorns, saying back in May of last year that Steve Sarkasian is a "freak of a coach" and thinks the programs brightest days are ahead.

“I think (the Longhorns) are going to get it going in the next few years and I’m excited to see what they can do," Manning said. "Obviously, he’s a freak of a coach with what he did at Alabama and the Falcons and everywhere else. He knows how to coach quarterbacks. He’s actually just a real nice guy and really laid back and I like him a lot.”

For whichever school eventually lands his talents, they will be getting a generational talent who can not just make plays in the pocket but is athletic enough to make things happen move outside it--unlike his uncles Peyton and Eli.

In 2021, Manning threw for 1947 yards, 26 touchdowns to only four interceptions while also adding 381 yards on the ground, scoring seven touchdowns.

We should get a commitment from the quarterback prodigy later this year with the first initial signing period for recruits beginning the first Wednesday in February. 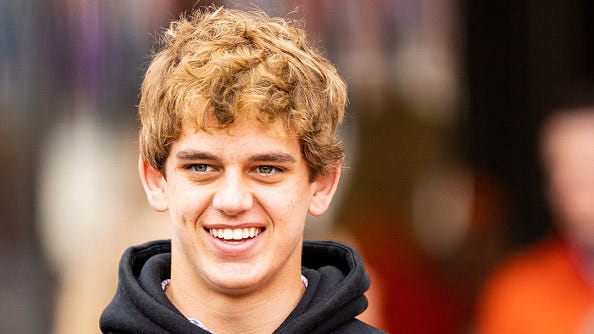