For the second time in three years, Max Scherzer has been scratched from a key October start.

Jorge Castillo of The Los Angeles Times reports that Scherzer won't make his scheduled start for the Los Angeles Dodgers in Game 6 of the NLCS "because of arm fatigue concerns."

Given that the team hasn't officially confirmed the news yet -- though Scherzer's scheduled Zoom press conference Friday night didn't take place, per Castillo -- we don't know who will pitch in Game 6 for the Dodgers. As the series shifts back to Atlanta, the Dodgers are down 3-2, and facing elimination at the hands of the Braves.

Acquired by the Dodgers ahead of the trade deadline, Scherzer has proven to be an excellent addition for the defending World Series Champions. The three-time Cy Young Award winner went 7-0 with a 1.98 ERA in 11 regular season starts after being traded to the Dodgers. Scherzer, now 37, has a 2.16 ERA in 16 2/3 innings this postseason, including coming on for the save against the San Francisco Giants in Game 5 of the NLDS.

If there is a Game 7 of the series, it's unclear if Scherzer would be available, either to start or to pitch in relief. While pitching for the Washington Nationals, Scherzer was famously scratched from Game 5 of the 2019 World Series with right trapezius discomfort that was so strong that he had trouble getting out of bed or putting his clothes on. He returned to throw 103 pitches over five innings in Game 7, as the Nationals ultimately defeated the Houston Astros to win the franchise's first World Series.

If Scherzer is unable to return this postseason, it's possible that he's made his final start with the Dodgers. While the team figures to attempt to re-sign him this offseason, there will likely be a slew of contenders interested as he reaches free agency. 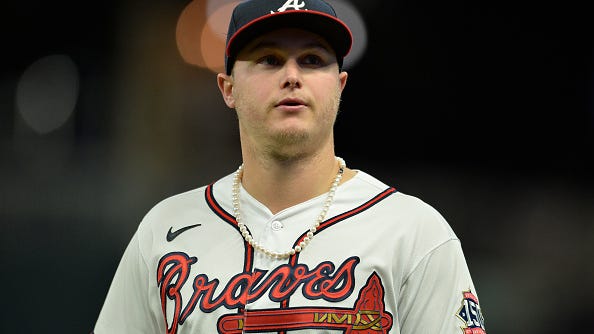