After an extended hiatus, Ben McAdoo is back in our lives and not a moment too soon. McAdoo, who spent last season as a “consultant” for the Cowboys (that came on the heels of a brief stint as Jacksonville’s quarterbacks coach), is beginning his first year as Carolina’s offensive coordinator, and it’s already been an eventful summer with Sam Darnold and the recently-acquired Baker Mayfield battling for the starting quarterback position.

Mayfield, in his short time with the Panthers, has already emerged as a fan favorite (you can hear them chanting his name at Tuesday’s practice). While McAdoo has so far been complementary of the former Heisman winner, he had his doubts leading up to the 2018 Draft, citing Mayfield’s size and relative lack of athleticism as red flags. Whatever the outcome, McAdoo (who Mina Kimes once quipped looks like he’s perpetually in disguise) thinks both players will benefit in the long run, assuming they don’t eat each other first.

“As long as we don’t resort to cannibalism, I think we have a chance to get out of this pretty good,” said McAdoo, invoking the zombie apocalypse in his comments to reporters Tuesday at Panthers training camp. “These guys are open, and they have conversations and help each other out. They encourage each other. It has been really good to see. They've been pros. That's what you want."

Training Camp Buzz: Ben McAdoo weighs in on state of the Panthers: "As long as we don't resort to cannibalism, I think we have a chance to get out of this pretty good"https://t.co/oC4lQ0WcS1 pic.twitter.com/sZob1RPID3

There’s still plenty of time for things to go awry—the Panthers begin their preseason slate Saturday at Washington—though McAdoo’s comments would suggest both quarterbacks have been on their best behavior, remaining civil while forging a working relationship. That’s a healthier dynamic than the one we saw in Green Bay between Aaron Rodgers and his icy predecessor Brett Favre or even Tom Brady and Jimmy Garoppolo, with Brady feeling so threatened by his understudy that he once denied him entry to the TB12 Center. While McAdoo obviously prefers an atmosphere of mutual respect and collaboration, that can be hard to come by in a sport dominated by male egos, where every player, no matter how far down the depth chart, is treated as competition.

If Mayfield beats out Darnold for the starting job, he’ll make his Panthers debut against the team that just traded him, with Carolina hosting the Browns September 11th at Bank of America Stadium in Charlotte. 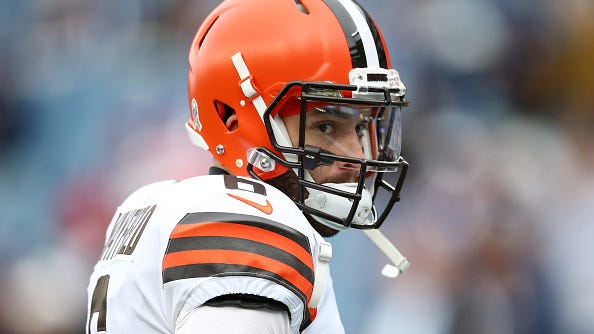