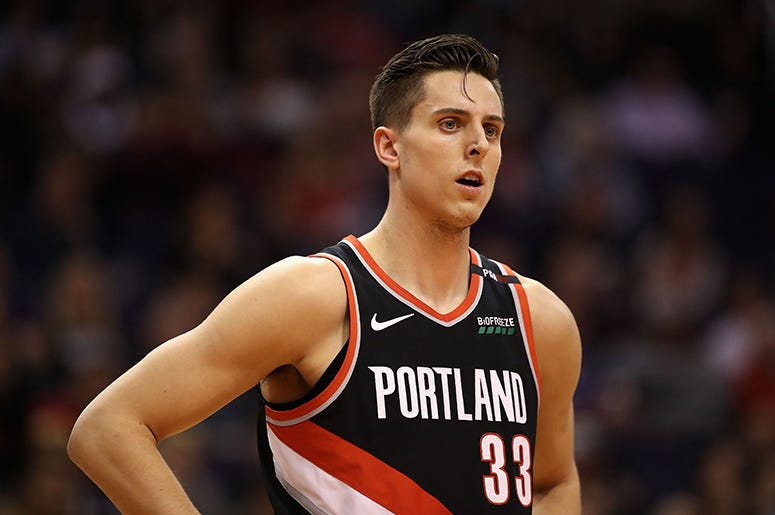 It’s been a long road to recovery for Trail Blazers center Zach Collins. He made strides in recovery after an initial September 1 surgery for an injured ankle at the 2019-20 season restart in Orlando. Collins then underwent a second procedure December 30. It’s become a cycle for the big man.

“I’m used to it, this type of day-to-day activity,” Zach told AJ and Dusty during an interview, this week. “For me, the biggest turning point was coming back from Vegas and being around the team, and being able to work out again with everybody and just start working towards something, and having a plan every day.”

Rehabilitation can be a grind on athletes, as progress and shortfalls are expected. But a real difficult part of the process is being away from the team. “That’s one of the worst parts of rehab, not being able to travel, not being in the grind with the guys,” Collins admitted. “You go through so many ups and downs during the season as a team and individually.

“I wasn’t super negative after I found out I had to go through surgery,” he recalled. “I was obviously very frustrated and very angry, but I turned that corner pretty quick.”

And @zcollins_33 - WHILE sitting down

Collins is keeping a positive attitude through rehabilitation. This recent injury has encouraged him to live in the moment, and take nothing for granted. “Going out there, not being afraid to fail is something that I’ve gotten better at throughout my career, and I’m going to continue to get better at,” he said. “When I come back, that’s my number one goal.

“I’m really not putting any pressure on myself,” Zach said of his recovery. “I’m doing what the team wants me to do every day and going with the flow.”

CHECK OUT ZACH’S FULL INTERVIEW WITH AJ & DUSTY IN THE PLAYER ABOVE!