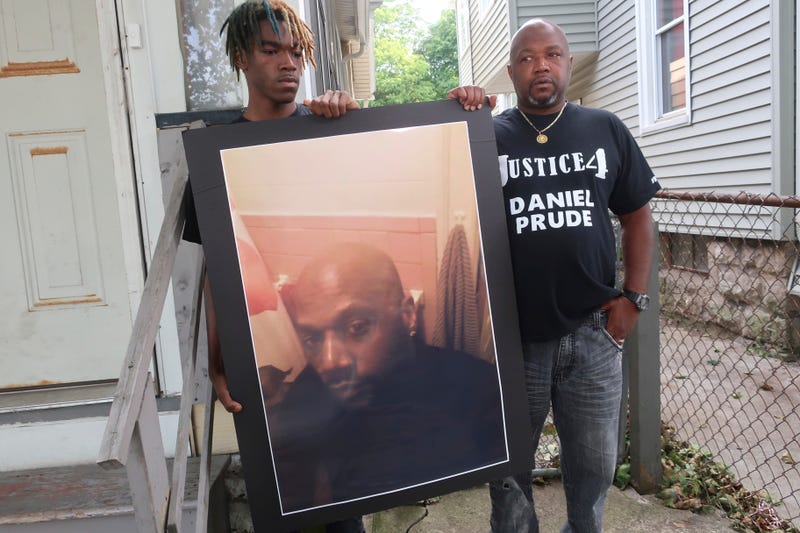 One of several police officers seen on video pinning down Daniel Prude, a Black man who died after being detained on a street in upstate New York, could face departmental discipline, the Rochester Police Department said.

Officer Mark Vaughn is the only officer to be served with “departmental charges” Thursday following an internal investigation of the police response to Prude, whose death sparked nightly protests and led to the suspension of seven officers.

Vaughn was cited for unnecessary or excessive force and discourteous/unprofessional conduct, the department said Friday. A formal hearing will be held later, followed by a hearing officer's recommendation for potential discipline.

Prude, 41, of Chicago, died in March 2020, a week after being held by officers against the pavement until he stopped breathing after he bolted from his brother’s home and shed his clothes during an apparent mental health episode.

Police body camera video released six months later shows Vaughn assuming a pushup stance while pressing Prude’s head to the pavement with his hands as other officers immobilize his legs. A mesh “spit hood” was placed over the head of Prude, who was naked on a cold night.

Lawyers for the police said the officers were strictly following their training in a technique known as segmenting.

Following the release of the departmental findings, Mayor Lovely Warren indicated she would seek Vaughn's termination.

“Our community has suffered greatly from the tragic death of Daniel Prude,” Warren said in a statement Friday.

The six other officers, who with Vaughn have been on paid suspension during the investigation, “will be initially assigned to Professional Development to ensure they are up to date on any policies and procedures,” the police department statement said.

Also Friday, police released a 23-minute video tracing Prude's movements from his arrival in Rochester the afternoon of March 22 to visit his brother Joe Prude to his fatal encounter with police in the pre-dawn hours March 23.

The video, pieced together from surveillance camera footage, cellphone and 911 recordings and police body camera video, shows a disoriented Prude walking and running barefoot for about a mile through dark and largely deserted streets and parking lots during a snowfall. Along the way, he removes the tank top and pajama bottoms he was wearing, leaving him naked by the time the officers, who were called by his concerned brother, catch up with him.

Joe Prude told police his brother had smoked marijuana dipped in the drug PCP and underwent a mental health evaluation at a Rochester hospital earlier in the day but had been acting normally just before running out the back door.

As he is handcuffed on the ground, Daniel Prude is heard launching into a confused rant, alternately demanding the police officers' guns and praying to Jesus Christ. The video, some of which was previously withheld by investigators, shows the officers held Prude face down to the ground for about two minutes before noticing he had stopped breathing and had no pulse.

Warren said she hoped that the work the city had done in creating person-in-crisis teams, changing police procedures, funding a police accountability board and training more officers in deescalation techniques "ensures that, going forward, we always respond to those in need with compassion and humanity.”

The county medical examiner listed Prude’s manner of death as homicide caused by “complications of asphyxia in the setting of physical restraint” and cited the drug PCP as a contributing factor.

A grand jury assembled by state Attorney General Letitia James declined to indict any of the officers.

The results of a departmental investigation were released in a brief statement Thursday evening.

“The Rochester Police Department’s (RPD) Conflict Counsel has determined potential grounds for legal recourse in the case of Officer Vaughn, as it relates to the March 23, 2020, incident,” the statement from Chief Cynthia Herriott-Sullivan's office said.