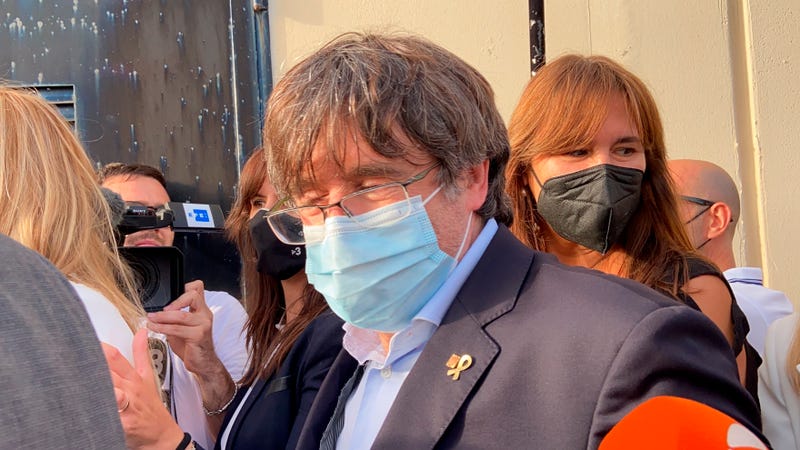 ROME (AP) — Catalan separatist leader Carles Puigdemont left a jail in Sardinia on Friday after a judge ruled that he could go free pending an Oct. 4 hearing on his extradition to Spain, where the political firebrand is wanted for sedition.

Puigdemont, the former president of Spain's Catalonia region and a member of the European Union parliament, left the jail in Sassari a day after he had been detained by police. He had been invited to attend a Catalan cultural event and a meeting of Sardinian independence sympathizers on the Mediterranean island.

“Spain never misses the opportunity to be ridiculous. #NoSurrender,” Puigdemont tweeted after he left the jail. Mobbed by reporters outside the gates, he said of his less than 24 hours behind bars: “Very good, no problem. The police and prison guards were very professional, very serious people.”

The judge who authorized his release ruled hours earlier that Puigdemont was free to travel without restrictions.

Judge Plinia Clara Azzena told The Associated Press by phone from the courthouse in Sassari that while she found his arrest to be valid, based on the documentation she examined, “we didn’t restrict him in any way. He can travel” if he wants.

Azzena and two other judges will hold an Oct. 4 hearing to rule on extradition.

Earlier, Puigdemont's Italian lawyer, Agostinangelo Marras, told reporters that when the judge during the brief hearing asked his client whether he wanted to go to Spain, Puigdemont replied “no.”

Puigdemont and a number of his separatist colleagues fled to Belgium in October 2017, fea