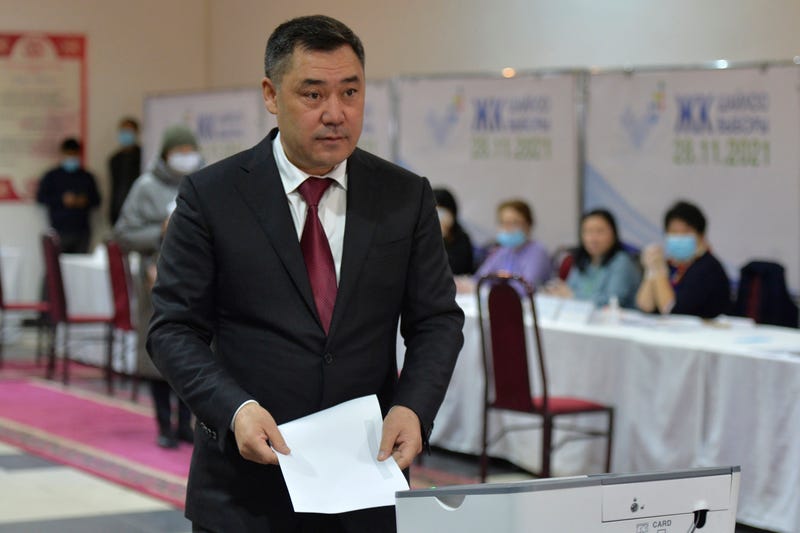 MOSCOW (AP) — Kyrgyzstan held a parliamentary election Sunday just over a year after a forceful change of government in the ex-Soviet Central Asian nation and voters backed parties supporting the country's new president, according to early results.

President Sadyr Zhaparov, who was elected in January following protests that ousted his predecessor, had expected that Sunday's ballot would further cement his grip on power.

With over 97% of precincts counted, three blocs all supporting Zhaparov emerged as the top vote-getters. Some opposition parties quickly challenged the results, accusing authorities of vote-rigging.

Kyrgyzstan, a mountainous landlocked nation of 6.5 million people that borders China, Tajikistan, Uzbekistan and Kazakhstan, is a member of Russia-dominated economic and security alliances. It hosts a Russian air base and depends on Moscow’s financial support.

Zhaparov was serving an 11 1/2-year sentence on charges of abducting a regional governor amid a dispute over a gold mine when he was freed by stone-hurling supporters who challenged the results of the October 2020 parliamentary election.

Last year's unrest marked the third violent ouster of the country's leader in 15 years. Like uprisings that toppled presidents in 2005 and 2010, the 2020 turmoil was driven by clan rivalries that shape the country’s politics.

After his election, Zhaparov pushed for a referendum that approved a new Constitution that substantially increased presidential powers at the expense of parliament. It reduced the size of the country’s parliament from 120 to 90 seats and gave the president the power to appoint judges and the heads of law enforcement agencies.

With more than 97% of the precincts counted, the Ata-Zhurt (Homeland Kyrgyzstan), Ishenim (Faith) and Yntymak (Harmony) blocs were leading the race with about 16%, 13% and 11% of the vote on party lists respectively, according to the Central Election Commission. All three blocs have been loyal to Zhaparov.

The opposition Alliance and Butun Kyrgyzstan (United Kyrgyzstan) opposition parties won 8% and 7% of the vote respectively while two other leading opposition parties, Ata Meken (Fatherland) and the Social-Democratric Party, appeared to miss the 5% threshold to make it into parliament. Their leaders quickly cried foul, accusing the authorities of rigging the ballot using the automated vote counting system and demanded a manual recount.

Zhaparov quickly agreed to the demand to do the recount, saying that all ballots should remain at precincts until it's completed. In a statement on Facebook, he insisted that the authorities didn’t meddle in the vote, and promised that the Central Election Commission members will be brought to justice if it’s found that they tinkered with the count.

Tensions had risen in the country ahead of the vote, with Zhaparov accusing his political foes of plotting a mutiny and warning that those who try to stage post-election riots would face prosecution.

“Some politicians are planning an armed coup," Zhaparov said. “We know them all, and after the vote we will take harsh measures against them.”

Speaking to the nation after the vote, the Kyrgyz leader hailed the election as “honest and fair” and again threatened “harsh measures” against those who would “attempt to undermine peace and stability.”

On Friday, the national security agency said it had foiled a coup plot involving several “destructively minded” parliament members and former senior officials who were accused of recruiting about 1,000 supporters and stockpiling weapons and drugs to stage post-election riots. On Saturday, the Kyrgyz authorities announced the detention of four representatives of political parties on charges of trying to buy votes.

The Interfax news agency said Bakytbek Zhetigenov, a parliament member from the Social-Democratic Party, was arrested Sunday on charges of plotting to seize power by force.