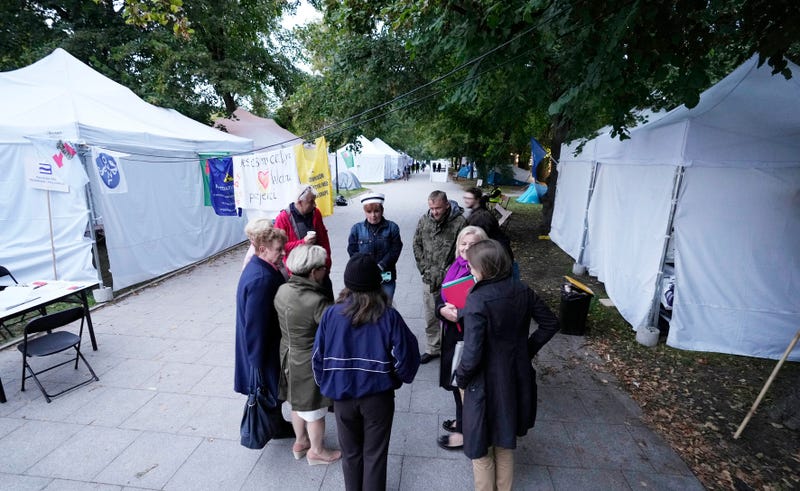 WARSAW, Poland (AP) — When a priest arrives at a hospital in Chorzow to perform the last rites, nurse Mariusz Strug can see the fear in dying patients' eyes. “After the sacrament, they knew what was happening,” he said.

But there have been no psychologists available to offer any consolation to the patients. Strug and another nurse would try to offer some kind words, but they were strained to the limit caring for 60 patients in their COVID-19 ward.

“People come to us and they want us nurses to perform a miracle," said Strug.

Exhausted from working in such an understaffed system, he is among a group of health care workers who have come to Warsaw from across Poland for an around-the-clock protest outside the prime minister’s office that has gone on for nearly two weeks.

After a year and a half of the pandemic, and with Poland on the cusp of a fourth surge of COVID-19 infections, nurses, doctors, ambulance drivers and other health care workers have come to urge Prime Minister Mateusz Morawiecki and other authorities to make deep reforms to the health care system, arguing that it is in danger of collapse.

“The pandemic showed us how bad the health care system is,” said Gilbert Kolbe, a nurse and spokesman for the protest movement. “This is the last chance to do something before it will be too late. We won’t be able to avert a crisis coming in five, ten years.”

While health care workers across the 27-nation European Union have been tested by the pandemic, Poland faced that test with fewer doctors and nurses than most. According to OECD statistics, Poland has the lowest number of working doctors in proportion to its population — just 2.4 to 1,000 inhabitants compared with 4.5 in Germany. Poland also has only 5 nurses to 1,000 inhabitants, below the EU average of 8 and far below richer countries like Germany, which has 14.

Poland’s health care sector has been strapped for resources for decades, a situation not rectified by a series of governments on the left, the center or now the right.

The problems have been exacerbated by the thousands of doctors, nurses and others who left Poland for higher paid work in Western Europe after the country joined the EU in 2004.

Of the medical professionals who have stayed in Poland, many have also left the public sector for better-paying jobs in the private sector, leaving fewer to care for the poorest people, said Kolbe, a 25-year-old who left a public hospital to work for a private medical company but hopes to return to the public system one day.

Kolbe said 5,500 people complete their nursing studies on average each year in Poland, but only about 2,500 go to work in the publi