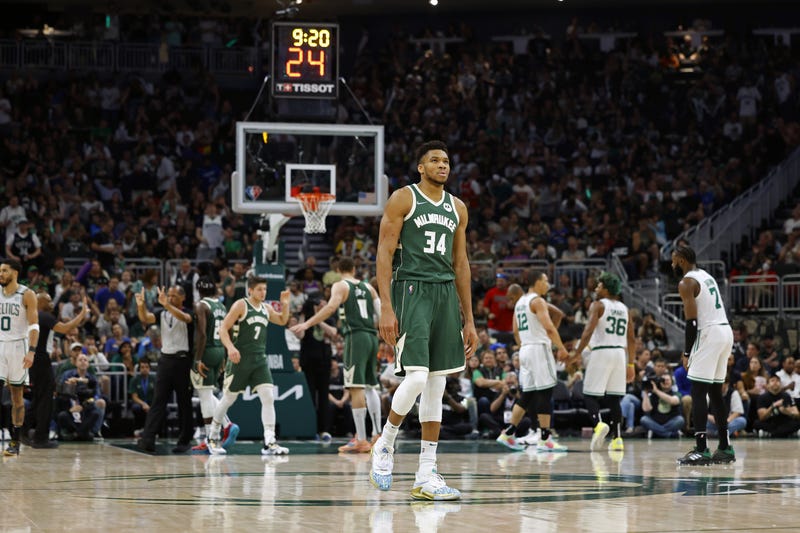 The Milwaukee Bucks had a chance to punch their ticket to the Eastern Conference Finals on Friday night. They came home after a thrilling comeback win in Game 5 in Boston with the chance to end the Boston Celtics season. Despite a historic performance from Giannis Antetokounmpo, the Celtics won Game 6 led by Jayson Tatum's 46-point night.

With a chance to close out the Celtics, Giannis Antetokounmpo came out ready to play. He went to the free throw line early and often to start the game. After starting 6 for 6 from the free throw line, he continued his dominance scoring 17 points in the 1st quarter.

Despite Giannis' great early play, the Celtics came away with the lead after the 1st quarter. Marcus Smart led the way with 14 points and Jayson Tatum chipped in 9 with his three shots from beyond the arc.

The Bucks didn't get much from anyone outside of Jrue Holiday and Giannis Antetokounmpo in the first half. Antetokounmpo and Holiday combined for 33 of the Bucks 43 first half points. The Bucks went into the half trailing by 10.

Giannis picked up his 4th foul just over 4 minutes into the 2nd half, but Coach Mike Budenholzer opted to leave him in the game with the Celtics looking to put the game out of reach. Milwaukee withstood the Celtics attempts to blow the game open, but the Bucks couldn't find much rhythm on the offensive end and headed to the 4th quarter down by 12.

The Bucks got it going early in the 4th and cut the Celtics lead down to 4 points. But Jayson Tatum took the game in his hands. His 46 points were too much for the Bucks to overcome. The Celtics won Game 6 to force Game 7 in Boston 108-95.

The series heads back to Boston on Sunday for Game 7. Tip-off is set for 2:30 PM. For the Best Bucks Coverage, keep it tuned to 1250 AM The Fan all playoffs long.