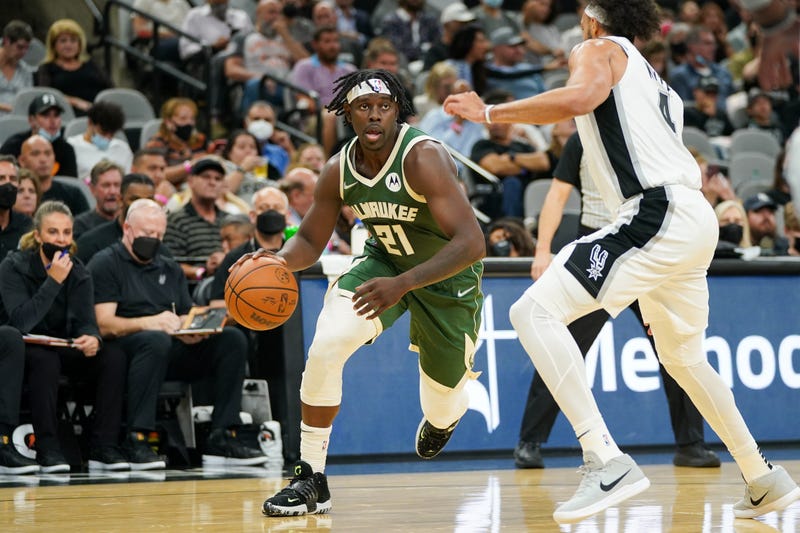 The Milwaukee Bucks looked to rebound after a poor performance in Miami on Thursday. The Bucks traveled to San Antonio to take on the Spurs on the second of three straight road games. The Bucks got back on track with a 121-111 win over the San Antonio Spurs.

The Bucks and Spurs both shot the ball well in the opening quarter. The return of Jrue Holiday helped the Bucks find a better rhythm offensively than they had in Miami. Pat Connaughton got his second straight start with Brook Lopez sidelined again with a back injury. The game was tied at the end of the first 32-32.

The 2nd quarter saw more good shooting as both teams finished the half shooting over 50% from the field. The Spurs extended their lead to 5 points with just over 4 minutes left in the half, but the Bucks went on a 13-4 run to finish the half to head into the break ahead 56-52. The Bucks were led in scoring by Giannis Antetokounmpo with 12 points and 10 points from Khris Middleton.

Milwaukee started the 2nd half well by extending their lead to double digits early in the 3rd quarter. The Spurs answered back though with a 20-4 run to take the lead. The Bucks finished the quarter well to regain the lead and head into the final quarter up by 4.

The Spurs tied the game early in the 4th quarter after a Doug McDermott 3-pointer knotted it up at 87. The Bucks then went on a 14-4 run to take a control of the game. The Spurs cut the Bucks lead to 4 with 4:24 left, but the Bucks quickly extended the lead back to double digits. The Bucks won their second game of the season 121-111 over the Spurs.

Six Bucks finished the game in double digits including all five starters. Khris Middleton led all scorers with 28. The team shot 44-83 (53.0%) from the field and 15-35 (42.9%) from behind the arc. Giannis Antetokounmpo chipped in 21 points, 8 rebounds and 8 assists. Jrue Holiday had 16 points in his return to the hardwood.

The Bucks will conclude their 3-game road trip on Monday against the Indiana Pacers. The Pacers enter the game 1-2 coming off an overtime win over the Miami Heat.

For the Best Bucks Coverage, keep it tuned to 1250 AM The Fan all season long!