On the eve of the NFL postseason, which kicks off with Saturday’s Wild Card opener between the Raiders and Bengals in Cincinnati, now seems like as good a time as any to take stock of the 14 teams remaining, from legitimate Super Bowl contenders to longshots just happy to be playing an extra game before inevitably dusting off their golf clubs next week. We saw Tampa Bay win it all as a five-seed last season and with perennial title threats Kansas City and Buffalo looking more vulnerable than in years past, it wouldn’t be a stunner if another low seed ran the table in 2022.

Who will be the last team standing? Here are the prime suspects.

14. Pittsburgh Steelers
The Steelers needed a miracle in Week 18 (they entered Sunday with just an eight-percent playoff probability), and that’s precisely what they got, benefiting from Jacksonville’s upset of Indianapolis and the right foot of Daniel Carlson. Pittsburgh boasts an experienced coach in Mike Tomlin and arguably the league’s top pass-rusher in T.J. Watt, but the reality is aging quarterback Ben Roethlisberger is on his last NFL leg, bearing little resemblance to the gun-slinging conqueror that hoisted Lombardi Trophies in 2005 and 2008. The Steelers own the second-worst point differential (-55) of this year’s playoff qualifiers and won’t have much margin for error against a battle-hardened KC squad coming off consecutive Super Bowl appearances. Barring a complete dud by the Chiefs, who boat-raced the Steelers when they faced them last month (36-10 was the final tally), Pittsburgh will likely be one and done. 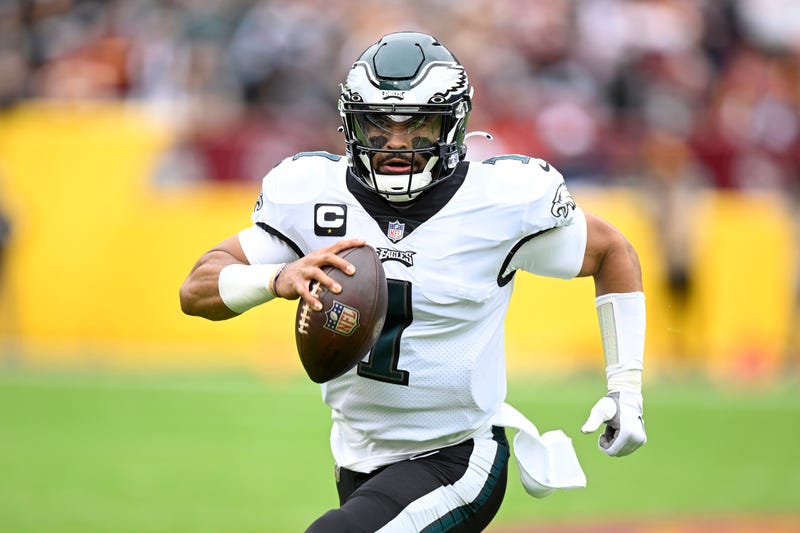 The Eagles playing in the postseason would have been hard to fathom two months ago, but after winning six of eight down the stretch, the Birds are officially playoff-bound. With three first-round picks in April’s draft, it feels like everything’s coming up Milhouse for Philly. That said, the Eagles have beat only one team with a winning record all season (New Orleans) and couldn’t have asked for a tougher first-round draw against the reigning world champs. At least starting quarterback Jalen Hurts (26 combined passing and rushing touchdowns) will be well-rested after getting a much-needed breather in Week 18.

12. Las Vegas Raiders
No team faced more adversity in 2021 than the Raiders, who overcame Jon Gruden’s midseason firing (the result of leaked emails containing racist, misogynistic and homophobic language) and Henry Ruggs’ career-ending arrest on felony drunk driving charges to reach the playoffs for the first time in five years. The Raiders are peaking at the right time with Sunday extending their winning streak to four games. Unfortunately, so are the scorching-hot Bengals, who happen to be their opening-round opponent. The Raiders limited Joe Burrow to a season-low 148 passing yards when these teams met in Week 11, though they didn’t have an answer for Joe Mixon, who steamrolled Vegas for 123 yards and two touchdowns in a game the AFC North champs won with relative ease (32-13).

11. New England Patriots
The Patriots began last month as the hottest team in football but have gone off the rails since then, limping into the playoffs by losing three of their final four games. Mac Jones has regressed with five interceptions over that span including a costly pick-six in Sunday’s loss to Miami. New England hung 222 rushing yards on the Bills in Week 13 and could employ a similar game plan Saturday with single-digit temperatures expected in Orchard Park. To upset Buffalo, the Pats will need a rebound performance from Pro Bowler J.C. Jackson, who Stefon Diggs lit up for 85 yards and a touchdown in Week 16. They’ll also need a big game out of Damien Harris, whose 15 rushing scores this season are the second-most in Patriots franchise history. 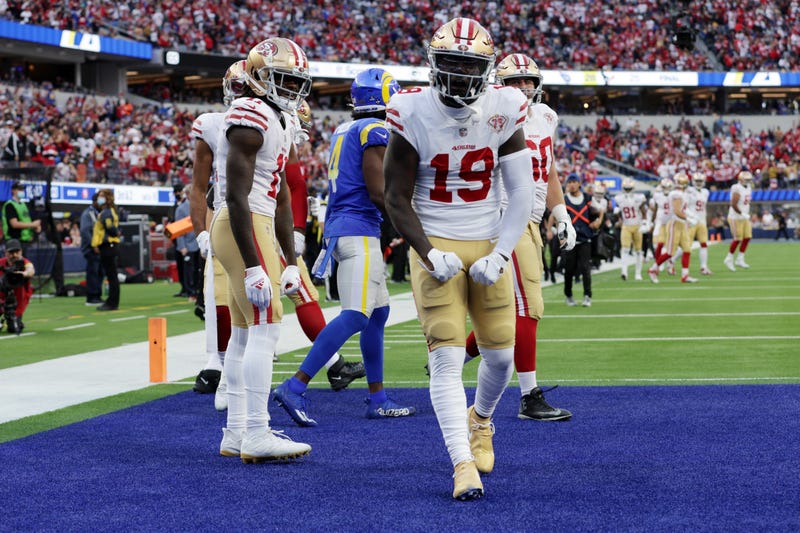 Playing with a torn thumb ligament, Jimmy Garoppolo left it all on the field in Week 18, punching the Niners’ playoff ticket by masterminding a late comeback drive to beat the Rams. Don’t be fooled by San Francisco’s record. This is no ordinary 10-7 team. The 49ers have momentum on their side (7-2 in their last nine games) and a weapon no other team has in Deebo Samuel (1,770 scrimmage yards, 14 touchdowns), a position-less hybrid and one of the most unique talents in all of football. They also have an ace up their sleeve in Elijah Mitchell, who led all rookies in rushing yards per game this season (87.5). Could the Niners lose to Dallas Sunday? Sure. But they also have the pieces to make a deep playoff run, just as they did two years ago, taking a 10-point lead into the fourth quarter of Super Bowl LIV.

9. Arizona Cardinals
The Cardinals didn’t play their best football down the stretch, taking it on the chin with four losses over their final five games. DeAndre Hopkins’ absence has been felt, though dual-threat Kyler Murray remains explosive as ever while goal-line fixture James Conner has been a touchdown machine with 18 combined rushing and receiving scores. Zach Ertz is no substitute for Hopkins but he’ll move the chains, as will Chase Edmonds, whose efficiency out of the Cardinals’ backfield this year was off the charts (career-best 5.1 yards per carry). Defensively, J.J. Watt, if healthy (he was designated for return last week), would add another terrifying element to a potent pass-rush led by four-time Pro Bowler Chandler Jones. All eyes will be on coach Kliff Kingsbury in his playoff debut against the Rams Monday night.

8. Cincinnati Bengals
There may not be a hotter offense in football right now than the Bengals, led by Joe Burrow, whose 971 passing yards in Weeks 16-17 were the second-most in a two-game span. Burrow’s former LSU teammate Ja’Marr Chase has been an absolute menace, recently passing Justin Jefferson (also an LSU alum) for the most receiving yards by a rookie in NFL history. Between Burrow, Chase, Tee Higgins, Joe Mixon and Tyler Boyd, the Bengals are flush with playmakers, a trait that should serve Cincinnati well in its playoff opener against the Raiders, who allowed a generous 439 points (seventh-most) during the regular season. 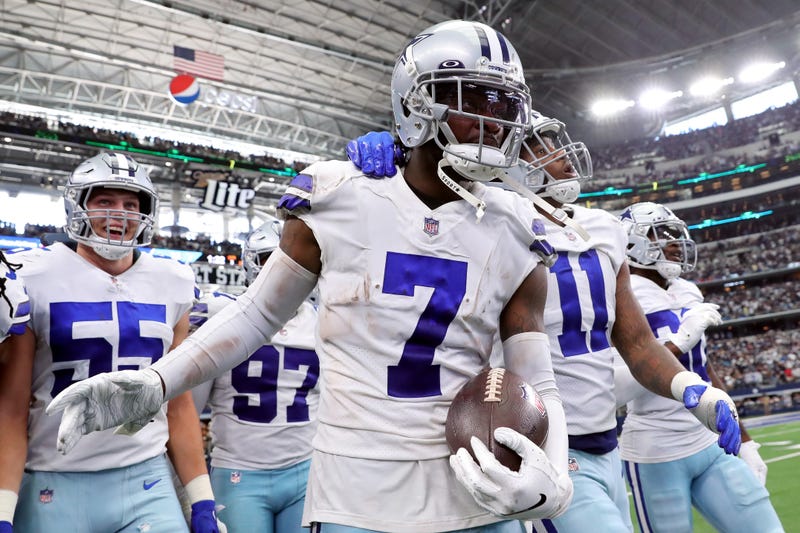 Dak Prescott may no longer be a threat to run (and who could blame him for being a hair gun-shy coming off last year’s ankle injury?), but he’s quietly playing some of the best football of his career, slinging 12 touchdowns with no interceptions over his last three contests. Michael Gallup’s torn ACL has opened the door for third-year slot man Cedrick Wilson, who erupted for a career-high 119 yards Saturday in Philly. Much has been made of Trevon Diggs’ feast or famine stylings in the Cowboys’ secondary (he leads the league in both interceptions and yards allowed), but even if you find his risk-reward approach ill-advised, ballhawks in his elite mold are still hard to come by. Will the moment be too big for coach Mike McCarthy, a textbook overthinker whose failures in the clock management department are well-documented?

6. Los Angeles Rams
On paper, Los Angeles may have the most talent of any team fortunate enough to make it this far, though the Rams’ fate rests in the hands of Matthew Stafford, who, for all his regular-season accolades, has never won a playoff game. Stafford has looked particularly shaky of late, committing seven interceptions in his last three showings. We know what to expect from Cooper Kupp, the first player to lead the NFL in catches (145), receiving yards (1,947) and touchdowns (16) since Panthers legend Steve Smith in 2005, but what about Cam Akers, who miraculously returned in Week 18, five months after tearing his Achilles in training camp?

5. Tennessee Titans
The top-seeded Titans have the look of a sleeping giant with the looming return of Derrick Henry hanging over the rest of the AFC like a thunder cloud waiting to burst. Julio Jones’ debut season in Nashville has been largely forgettable, though he did show signs of life with 58 yards and a touchdown—the first of his Tennessee career—in Sunday’s regular-season finale at Houston. Which version of the Titans will we see in the postseason—Dr. Jekyll (wins over Buffalo and Kansas City) or Mr. Hyde (losses to the Jets and Texans)?

4. Tampa Bay Buccaneers
The Bucs aren’t exactly playing with a full deck—Leonard Fournette has spent the past month on injured reserve along with Chris Godwin (torn ACL), while agent of chaos Antonio Brown burned every last bridge on his way out of town last week. But the defending champs have been there before and lead the NFL in one absolutely essential metric—they have one Tom Brady to the rest of the league’s none. What Brady has done at age 44, remaining in the MVP conversation with 43 touchdowns and 5,316 passing yards—both NFL-bests—is almost comical in its absurdity, a disrespect Father Time will never recover from. Lost in the spectacle of Brown’s dramatic flameout has been Rob Gronkowski having one of the best statistical seasons of his Hall-of-Fame career (55-802-6 receiving line in 12 games). 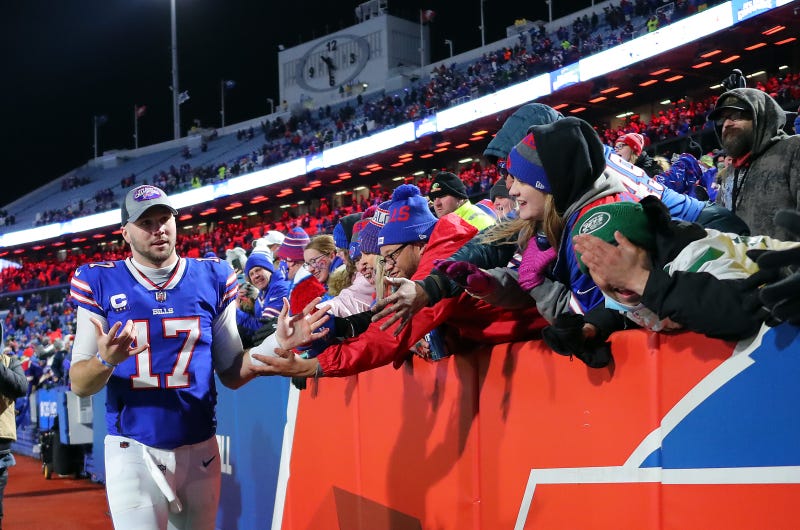 While “consistency” may not be the first word that comes to mind when describing this year’s Buffalo Bills, Sean McDermott’s crew is obviously plenty talented and appears to be trending in the right direction, securing their second division title in as many seasons on the strength of a four-game winning streak to close out 2021. Confined to committee status for much of his career, Devin Singletary has found another gear, contributing 396 yards (323 rushing, 73 receiving) and five touchdowns over his last four outings. Franchise quarterback Josh Allen hasn’t been as sharp in the passing game this season (career-high 15 interceptions), but whatever deficiencies he’s shown in that regard the 25-year-old has offset with his outstanding rushing production (763 yards, six touchdowns on the ground).

2. Green Bay Packers
Love him or hate him, Aaron Rodgers is still at the height of his powers, delivering 40 touchdowns (37 passing, three rushing) against just four interceptions this year while making a worthy case for his second straight MVP. The Packers are getting healthy at the right time with veteran tackle David Bakhtiari debuting in Week 18 and stud linebacker Za’Darius Smith expected back after Green Bay’s first-round bye. It’s hard to think of a more dynamic running back tandem than AJ Dillon and Aaron Jones, who combined for 2,306 yards and 17 touchdowns during the regular season. Good luck beating Green Bay on its home field. The Packers went undefeated in their eight games at Lambeau this year, outscoring opponents 245-134 in that span.

1. Kansas City Chiefs
The Chiefs’ sluggish 3-4 start feels like ancient history with the power trio of Patrick Mahomes, Tyreek Hill and Travis Kelce raining down touchdowns like the almighty Zeus atop Mount Olympus. You know you’ve established an insanely high bar when 4,839 passing yards and 37 touchdowns is considered a “down year” by Mahomes standards. Kansas City’s midseason acquisition of Melvin Ingram (PFF’s 18th overall grade out of 199 edge qualifiers) may have been the single-most impactful move of this year’s trade deadline. Winners of nine of their last 10, last year’s AFC Champs are rounding into form, and that’s a scary thought for the rest of the league.