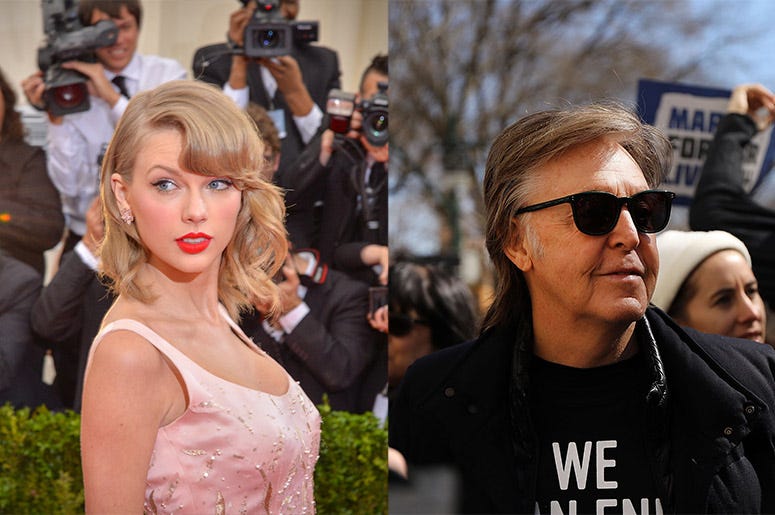 Taylor Swift and Paul McCartney are two superstars from wildly different generations. But in a new Rolling Stone interview series it becomes apparent they share similar stresses associated with fame.

The artists met for a conversation that covered celebrity, song writing, family and love. McCartney asked Swift about the writing process around her latest single “Peace.” She alludes its inspiration to her current relationship with British actor Joe Alwyn.

“'Peace' is actually more rooted in my personal life. I know you have done a really excellent job of this in your personal life: carving out a human life within a public life, and how scary that can be when you do fall in love and you meet someone, especially if you’ve met someone who has a very grounded, normal way of living,” she told the former Beatle.

"I think that in knowing him and being in the relationship I am in now, I have definitely made decisions that have made my life feel more like a real life and less like just a storyline to be commented on in tabloids."

Both artists served as generational figures in the respective pop genre. Taylor waded through the waters of self-discovery with albums like 1989 and reputation. It’s something Paul knows all too well from his time with The Beatles. “But, you know, let’s face it, you crave fame and attention when you’re young," he told Swift.

“And I just remembered the other day, I was the guy in the Beatles that would write to journalists and say [speaks in a formal voice]: ‘We are a semiprofessional rock combo, and I’d think you’d like [us].… We’ve written over 100 songs (which was a lie), my friend John and I. If you mention us in your newspaper…’"

Another parallel discussed was the coronavirus pandemic. Swift and McCartney both released new music during this chaotic year. Paul noted that his latest album, McCartney III, and Taylor’s latest work, Folklore, were birthed from a common yearning of expression during a stressful period in world history. “Like, this isn’t HIV, or SARS, or Avian flu, which happened to others, generally. This has happened to everyone, all around the world,” he pointed out.

“That’s the defining thing about this particular virus. And, you know, my parents… it happened to everyone in Britain, including the queen and Churchill. War happened. So they were all part of this thing, and they all had to figure out a way through it. So you figured out Folklore. I figured out McCartney III.”