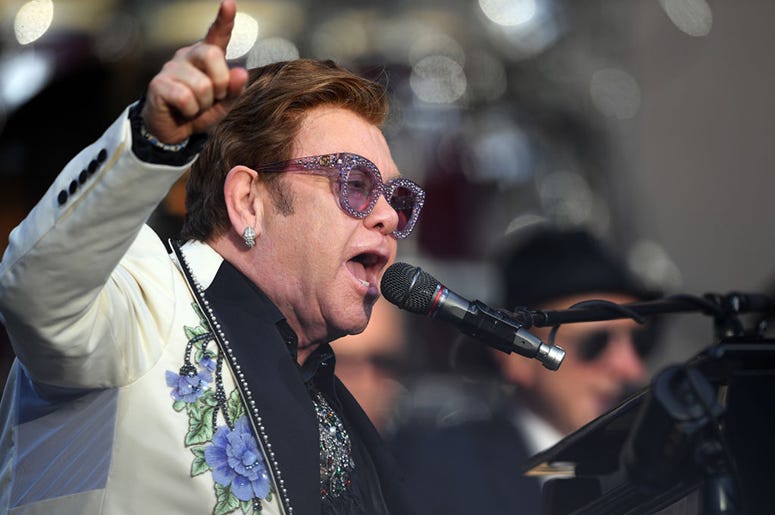 Due to the COVID-19 pandemic, Elton John's Farewell Tour likely won't be over until 2022 at the earliest, but he hasn't completely written off the idea of playing more concerts in the future. If he does return to the stage, though, don't expect the hits.

Speaking to Rolling Stone, Elton says he's interested in playing a long residency in one location for a smaller audience, and focusing on deep cuts that he never really got a chance to perform live.

"When I do finish this world tour, if I do do a concert again, it will similar to what Kate Bush did at [London's] Hammersmith Apollo [in 2014]," he tells the publication. "She came on and played for three weeks to 4,000 people a night."

"If I do that, I don't want to sing 'Crocodile Rock' again and I don't really want to sing 'Saturday Night's Alright for Fighting' again," he admits. "They are wonderful songs. They have done me very well. But there are other songs...that I want to sing."

Two examples Elton cites are "Original Sin" and "American Triangle," both from his 2001 album, Songs from the West Coast. For now, though, you can hear those songs -- as well as deep cuts from his albums The Diving Board, The Union, Ice on Fire and Made in England -- on his upcoming rarities box set Jewel Box, coming out November 13.

"There are songs on those albums that I really love," he declares. As for why he never performed them live, Elton says. "If you play concerts -- and Mick Jagger will back me up on this -- if you don’t play [the hits], people will get pissed off. You put a couple of new songs in and people will take a toilet break, usually."