“Siri, where are my AirPods?”

Brad Gauthier of Massachusetts woke up one morning struggling to breathe. When he tried to drink water to get some relief, he experienced a choking sensation.

He tried chalking it up to a dry or sore throat, but the problem persisted throughout the day.

It wasn’t until he couldn’t locate his missing Apple AirPod that he began to grow concerned.

Gauthier told KVEO that he spent several hours shoveling the snow the night before following the Nor’ester that blew into town and was “worn out” when he went to bed.

He also noted that he sleeps with his AirPod’s nightly, though he never considered that he could accidentally swallow one.

“By that point, my son and wife had gotten the idea that I may have swallowed it. They brought it up jokingly at first, but it seemed too coincidental that I would be missing it when I knew I went to bed with it, while I felt a distinct blockage in the center of my chest,” explained Gauthier. 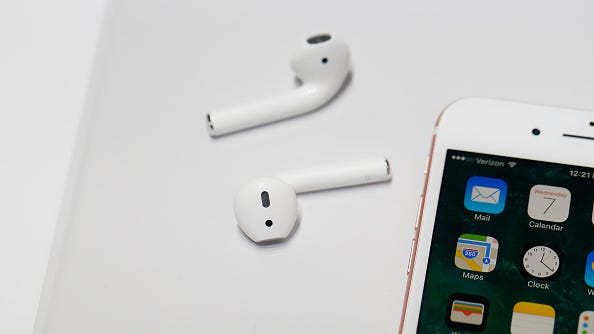 Boy Swallows AirPod He Got for Christmas, Waits for It to 'Pass'

Gauthier decided not to tempt fate and went to the hospital to get an X-ray.

It turns out, his family’s speculation was correct – there on the black-and-white image was an AirPod lodged in his esophagus.

"They were all jaws a slack, looking at this X-ray on the screen where you could see it in such clear definition,” he told The Mirror.

An emergency endoscopy was performed to remove the lone headphone.

“The GI physician said it’s extremely uncommon for a blockage not to be painful or severely discomforting,” he said.

"Had I inhaled it or it had gotten lodged or constricted my airway that could have certainly been a significantly more serious matter,” he told The Mirror.

He explained that he learned his lesson: “It never occurred to me that [sleeping with headphones] could be a safety hazard. I was really quite lucky.”