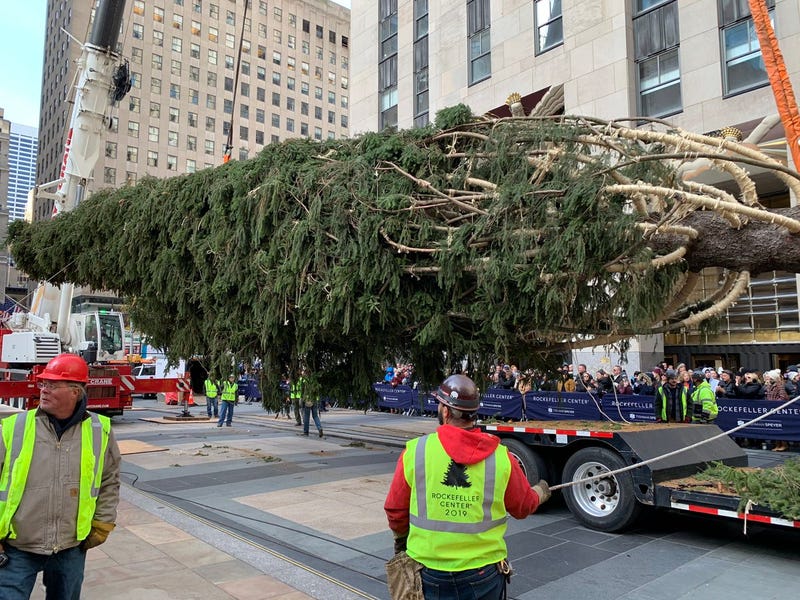 NEW YORK (WCBS 880) – The famed Rockefeller Center Christmas tree has been hoisted into place, ushering in the unofficial start of the holiday season in New York City.

The 14-ton Norway spruce finished its 60-mile journey from Orange County on Friday night when it arrived at Rockefeller Plaza.

The tree comes from the home of Carol Schultz, who planted the sapling in her front yard in Florida, New York, back in 1959.

It certainly feels like Christmas outside, and it’ll soon look like it too. @rockcenternyc 🎄 about to be hoisted into place @wcbs880 pic.twitter.com/ZO4w6hPmXK

In 2010, Schultz and her companion Richard O'Donnell went on Rockefeller Center's website and made the tree's bid for stardom.

“I always said to it, ‘You’re going to be at Rockefeller Center someday,’” Schultz told WCBS 880’s Steve Burns.

Schultz admits it’s bittersweet to see the empty space in her yard where the tree used to be.

“But everybody else will get to enjoy it, and I’ll see it lit up!” she said.

Here’s Carol Schultz with what she calls “my baby.” She planted this Norway Spruce in 1959 outside her home in Orange County.

The tree, which is 77 feet tall and 46 feet wide, was hoisted into the air before it was put into place Saturday morning.

Crowds gathered to snap photos of the tree as holiday music played in the background. With wintry temperatures gripping the tri-state, it even felt like December on Rockefeller Plaza as the tree was put in place.

Crews are now beginning the intricate process of getting the tree ready for the tree lighting ceremony on Dec. 4.

Pine needles fall like snowflakes as the tree is uprighted pic.twitter.com/2tNbeiAFzr

Erik Pauze, the head gardener at Rockefeller Center since 1995, is always scouting for potential trees.

“When I saw this tree, it had a nice perfect shape. It was nice and full,” Pauze said.

Little did Pauze know that he was making Schultz’s lifelong dream come true. She was the first to hammer the stake in at its base, followed by her son Ken.

“She was talking to the tree and crying,” Ken said. “And I said, ‘It’s bittersweet, but millions of people are going to see it and enjoy it, so you couldn’t have a better ending.’”

Attaching to the base pic.twitter.com/Gl0wGwqLDP

After the tree lighting ceremony on Dec. 4, the tree will be on display until Jan. 14, 2020. It will then be donated to Habitat for Humanity, which will build a home out of it.