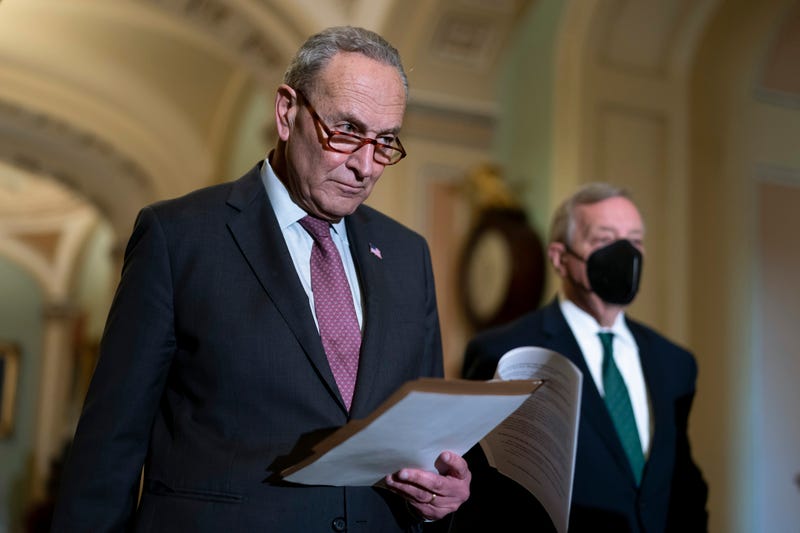 WASHINGTON (AP) — In a U.S. Senate that was upended by toxic Supreme Court battles during the Trump era, the confirmation of President Joe Biden’s pick has the potential for something else: a return to calmer political normalcy.

Because the ideological balance of the court is not at stake — Biden is expected to nominate a liberal judge to replace liberal Justice Stephen Breyer, who is retiring — the charged partisan atmosphere that greeted other recent vacancies is notably absent.

Most Republicans still are expected to oppose Biden’s nominee, no matter who it is. But having changed the rules to prevent a filibuster, they are essentially powerless to stop the Democratic majority from confirming Biden’s choice.

They're expected to refrain from dramatic action, content with the 6-3 conservative majority they solidified under former President Donald Trump.

“I think it’s going to be a more traditional confirmation fight,” said Mike Davis, a former chief counsel to Republicans on the Senate Judiciary Committee and now president of the Article Three Project that advocates for conservative judges. Texas Sen. John Cornyn, a member of the committee, said the nominee will be treated not only “fairly” but with “dignity and respect.”

Biden has pledged to nominate the first Black woman to the court, making it politically harder for Republicans to oppose a historic pick. And he said at Breyer’s official announcement on Thursday that he’ll talk to GOP senators before making his decision by the end of February.

If there are no glaring problems with the nominee, the confirmation hearings could proceed relatively drama-free, senators say.

Still, the challenges of a 50-50 Senate will hang over Democrats who control the process for the first time in more than a decade. With such a narrow balance, Republicans could slow the process by throwing up procedural roadblocks. And Democrats who have said they want a speedy confirmation process could turn off moderates in both parties if they try to move too fast.

For now, some Republicans and conservative groups are promising a vigorous political debate but with restraint, mindful that Democrats suffered politically after Justice Brett Kavanaugh’s contentious confirmation fight in 2018. Senate Democrats went on to lose seats in the midterm elections after focusing on allegations that Kavanaugh sexually assaulted an acquaintance when he was a teenager — a charge he vigorously denied —and Republicans are not interested in staging a similar showdown.

Maine Sen. Susan Collins, a moderate Republican who Democrats hope will support their nominee, has voted for many of Biden's choices for lower courts. She said Wednesday evening that Judiciary Committee Chairman Dick Durbin, D-Ill., had already reached out to her about the process to come.

“There is no need for any rush,” Collins said, noting that she voted against Justice Amy Coney Barrett in 2020 because Republicans moved too fast to confirm her.

Breyer has said he won’t officially step down until the court’s term ends this summer.

Most Republicans have been quiet on strategy as they wait to see who Biden chooses. Senate Republican Leader Mitch McConnell said Thursday that the American people elected a 50-50 Senate, and that Biden’s mandate was to “govern from the middle, steward our institutions, and unite America.”

“I’m going to give the president’s nominee, whoever that might be, a fair look,” McConnell said.

Perhaps the greatest risk for Biden is if his own party splinters into factions who prefer a more liberal or centrist choice. That's the kind of scenario that could make it difficult for Senate Majority Leader Chuck Schumer to rally all 50 Democratic senators, with no votes to spare.

In fact, a lack of party unity has badly hobbled Democrats in recent months. Two moderates, Sens. Joe Manchin of West Virginia and Kyrsten Sinema of Arizona, have split from their colleagues and stopped large swaths of Biden’s policy agenda. But both have also been reliable votes for his nominees to courts.

Manchin signaled on a radio show in his home state Thursday that he is prepared to support Biden’s high court nominee, as well, as long as the person is fair and able to work with the other justices.

“It would be the character of the person" that matters, Manchin said, even if the nominee is more liberal than he is.

Sinema said in a statement that she will examine the nominee based on whether she is “professionally qualified, believes in the role of an independent judiciary, and can be trusted to faithfully interpret and uphold the rule of law.”

Outside conservative groups are preparing to portray Biden's nominee as out of step with the mainstream, hand-picked to satisfy the liberals in the Democratic Party, in contrast to Biden’s campaign promises to govern as a more moderate figure. It's a message that dovetails with the GOP's broader critique of a president they say is captive to the Democrats' progressive wing.

Carrie Severino, president at the limited-government-advocacy Judicial Crisis Network, said her group plans to focus in part on the eventual nominee’s ties to any liberal groups, particularly those that help fund candidates and issues.

“You will not see the personal, ugly attacks,” Severino said in an interview. But opposition is still likely, she indicated, predicting Biden’s choice will be “a nominee that is not responding to that call for moderation and is going to move the court to the left.”

This will be the first time Democrats have had a Senate majority — with Vice President Kamala Harris' tie-breaking vote — and the opportunity to fill a Supreme Court vacancy in more than 11 years. Since Justice Elana Kagan was confirmed in 2010, the GOP-led Senate has confirmed three justices, all nominated in Trump’s term: Neil Gorsuch, Kavanaugh and Coney Barrett.

All three of those confirmation battles were searing experiences for Democrats.

Gorsuch was confirmed a year after Republicans refused to allow a vote on President Barack Obama’s choice to serve on the court, now-Attorney General Merrick Garland. Kavanaugh was confirmed after a wrenching hearing in which his high school acquaintance, Christine Blasey Ford, accused him of sexual assault.

Barrett was confirmed in late October of 2020, just days before the election that Biden won, replacing liberal icon Ruth Bader Ginsburg and shifting the balance of the court decisively toward conservatives.