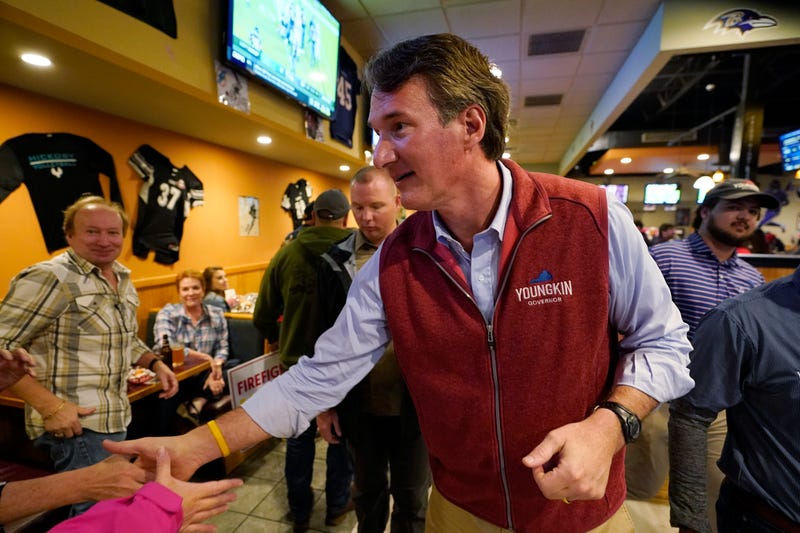 RICHMOND, Va. (AP) — When Glenn Youngkin threw his hat and his cash into the Republican nominating contest for Virginia governor this year, he was a rich former private equity executive with no experience as a candidate, and few insider connections or public political views.

“Most party loyalists and insiders didn’t know much about him," said Todd Gilbert, the state House minority leader, who initially endorsed a fellow lawmaker in the race.

Nearly nine months later, Gilbert and much of his party have come around.

Republicans from all factions of the GOP now say Youngkin may be the ideal candidate to reverse more than a decade of stinging losses in Democratic-leaning Virginia and show a path forward for a national party riddled with division after the turmoil of the Trump years.

A blank slate, Youngkin has scant public record to examine. He's self-funded much of his bid. He's proved to be a natural campaigner, deftly seizing on dissatisfaction with Richmond and Washington. In style, the genial, 54-year-old suburban dad who often opens meetings with prayer is nothing like former President Donald Trump, who galvanized a surge of Democratic resistance before losing the state last year by 10 percentage points.

But in substance, Democrats see an extremist with softer packaging. They have accused Youngkin of promoting democracy-eroding election fraud conspiracies. Youngkin has embraced Trump's endorsement and kept up ties to far-right figures. He's dodged when pressed for details on policies on abortion rights and gun control, and leaned into culture war fights over schools and pandemic precautions. Like many Republicans, he's preferred interviews with right-leaning news organizations. His opponent, former Gov. Terry McAuliffe, calls Youngkin a “Trump wannabe.”

Youngkin's chances may hinge on whether voters believe that characterization.

“How do we bring people together, as opposed to push them apart and separate them?” Youngkin said in a recent interview when asked about what inspired his run for office.

There's little doubt his approach is working with Republicans. The former co-CEO of The Carlyle Group has poured millions of his own fortune into an energetic campaign that has peppered swaths of Virginia with red lawn signs and left Democrats, currently in full control of state government, increasingly nervous.

Less than two weeks out from an election whose results are likely to ripple far beyond Virginia, polls show a tight race.

But if Youngkin has trouble broadening his appeal in the state’s critical, swingy and moderate suburbs, it may stretch back to his fight for the GOP nomination. Then, he ran on “ election integrity ” and refused for months to say plainly whether President Joe Biden had been legitimately elected.

Brad Hobbs, a close friend who has helped the campaign fundraise, donated personally and traveled to campaign stops with Youngkin, said the candidate was just appeasing the base.

Youngkin told him “early on” in the nomination contest that Biden had legitimately won the election, Hobbs said. But Youngkin was facing “rabid” party activists who wanted to hear that the candidate shared their concerns about the election, said Hobbs, who described himself as a moderate who voted for Trump in 2016 and Biden in 2020.

“If he just dismissed it, no way he could have won the primary. I mean, just no way," said Hobbs, who allowed that maybe things would have been different if Youngkin had more time to campaign. "Once you meet him, you really don't care what he believes. You just go, ‘I want him to win.’”

Now, as he courts independents and moderates, Youngkin talks about pumping the brakes on Democrats' progressive drive in Richmond. But he largely campaigns on solidly conservative positions.

In his ads and campaign appearances, he emphasizes he’s a “homegrown” Virginian.

Born just outside Richmond, Youngkin's mother, his “hero," was a nurse and accomplished nursing educator. His father worked as an accountant and bookkeeper, he said.

The family relocated to Virginia Beach after his father — “a good dad” but not a “good career guy” — lost his job. Childhood friends described him living a comfortable but not lavish middle-class life.

The 6-foot-6 Youngkin said he received a partial scholarship to attend a prestigious private school, Norfolk Academy, where he excelled at basketball and was recruited to play at Rice University in Texas.