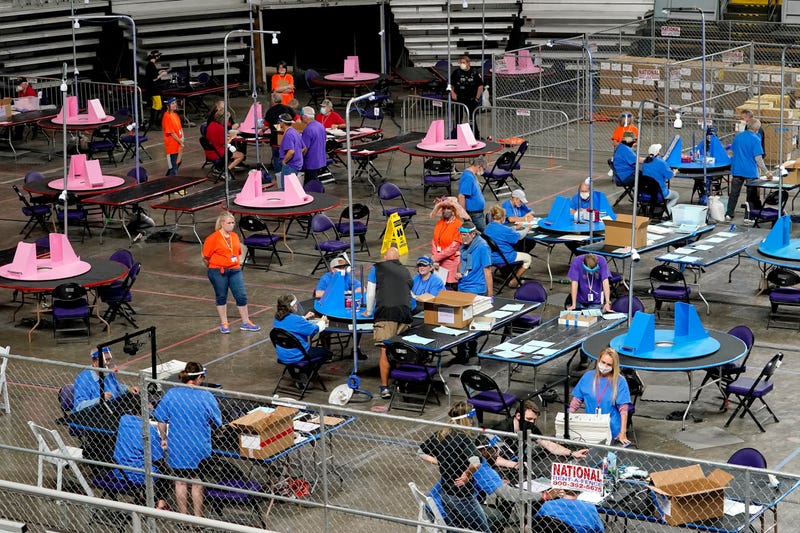 HARRISBURG, Pa. (AP) — The most closely watched attempt by Republicans to examine the 2020 presidential election in a battleground state lost by former President Donald Trump is coming to an embarrassing end in Arizona, but their efforts are cranking up elsewhere.

The most recent is in Republican-controlled Texas, where the secretary of state's office announced Thursday it would conduct a "full and comprehensive forensic audit" of the 2020 election in four heavily populated counties.

These reviews go by various names: “audits” or “investigations,” sometimes with the word “forensic” attached.

But their scope is not always well-defined or understood, even by those pushing them, and critics say they really have one goal: to validate Trump's baseless claims that widespread fraud cost him the election, regardless of what the reviews might find.

None of the reviews can change the fact that Joe Biden won the presidency. His victory was certified by officials in each of the swing states he won and by Congress on Jan. 6 — after Trump’s supporters, fueled by the same false charges that generated the audits, stormed the Capitol to try to prevent the electoral certification.

Here's a closer look at the Republican election reviews:

WHERE IS THE GOP PURSUING THESE ELECTION REVIEWS AND WHY?

Republicans have sought the reviews in Arizona, Michigan, Pennsylvania and Wisconsin — all battlegrounds lost by Trump. The latest is Texas, where Trump had a 5.5 percentage point margin of victory.

Auditing efforts have occasionally played out on a smaller scale, such as in Fulton County, Georgia, which includes Atlanta, individual counties in Pennsylvania and Michigan, and in a state legislative race in New Hampshire.

In practically every case, the reviews were launched under pressure from Trump and his allies to carry out an Arizona-style investigation into ballots, voting machines and voter rolls for evidence of fraud to legitimize claims that have universally been debunked.

In Wisconsin, one review is being conducted by the highly respected, nonpartisan Legislative Audit Bureau. The other, ordered by Republican Assembly Speaker Robin Vos, is being led by a retired Wisconsin Supreme Court justice, a conservative who told Trump supporters in November the election had been stolen.

In Pennsylvania, Republicans are retrenching after counties in July rebuffed a sweeping demand for voting machines, ballots, computer logs and more.

A Republican-controlled Senate committee last week sent a subpoena for a wide array of election-related records to state election officials. Democrats are suing to block it.

The latest, in Texas, was abruptly announced just a few hours after Trump released a statement telling Republican Gov. Greg Abbott that “Texans demand a real audit to completely address their concerns.”

The secretary of state’s office — where a top deputy has previously said the 2020 elections were “smooth and secure” — said it would audit four of the state’s most populous counties: three voted for Biden and the other is where Republicans are quickly losing ground in the booming Dallas suburbs.

WHY DO DEMOCRATS AND OTHER CRITICS SAY THE REVIEWS ARE BOGUS?

For starters, Trump’s false claims of an election stolen by widespread fraud have been debunked by both Republican and Democratic judges, his own Justice Department and numerous recounts and audits.

The quests to unearth election fraud have not, so far, even remotely resembled the kind of audits that are widely recognized as legitimate by the professional auditing community.

In Arizona, election experts have cited numerous flaws with the review, from biased and inexperienced contractors to conspiracy-chasing funders and bizarre, unreliable methods. Nearly every allegation made by the review team so far has crumbled under scrutiny.

Democrats say Republicans are simply perpetuating Trump’s “big lie” of baseless claims about election fraud. They say those claims have eroded confidence in elections and that Republicans are on a mission to seize power by taking away voting rights and undermining both democracy and elections.

SHOULD THEY EVEN BE CALLED "AUDITS"?

That's because actual election audits follow standard procedures and are conducted by experienced professionals. In Arizona, the lead contrac