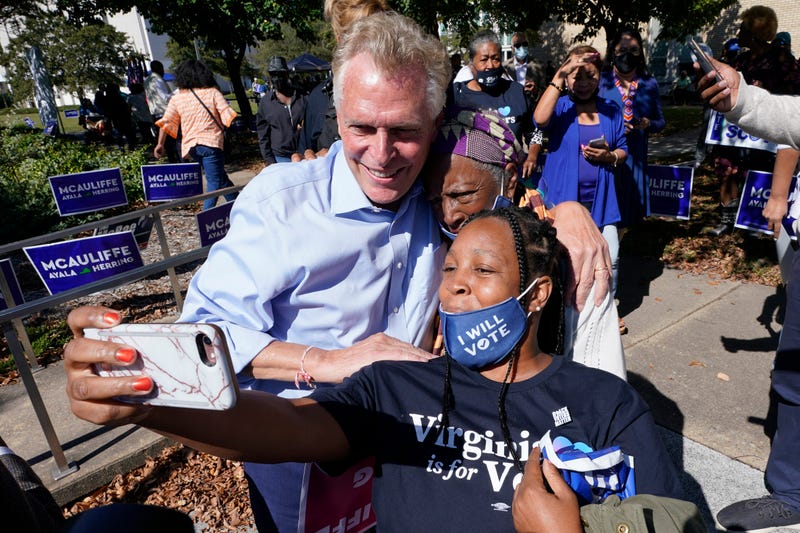 NEWPORT NEWS, Va. (AP) — Terry McAuliffe is a blur of handshakes, hugs, backslaps and smiles as he glides through the friendly crowd at Gethsemane Baptist Church seeking help from above.

For the former Virginia governor running again for his old job, it's not necessarily God's grace he's after at this moment. He's seeking assistance from another higher power a few hours north in Washington, where McAuliffe's longtime friends in Congress are struggling to pass an infrastructure package that could help millions of Virginia residents — and his own campaign.

McAuliffe's desperation to turn that legislation, with its billions of dollars for new roads and bridges, into a final pitch to voters is clear when he runs into Rep. Bobby Scott, a Virginia Democrat and close political ally for more than a decade.

“Greatest member of Congress to ever serve! He’s our man!” McAuliffe proclaims with his arm around the 15-term congressman. “You gonna get me an infrastructure bill?”

Scott pauses for a few moments of awkward silence.

“Uhhh, it’ll be last minute,” he says not-so-confidently as McAuliffe moves to shake another hand.

Such high-touch bravado worked for McAuliffe in 2013, when he became the only Virginia candidate in 44 years to win the governor's mansion when his party occupied the White House. But in the closing days of the 2021 election, the 64-year-old graying Democrat's intensely personal brand of politics, one that leverages decades-old friendships, frenetic hands-on campaigning and unrestrained authenticity, is facing a more formidable test.

McAuliffe is locked in a close race with Republican newcomer Glenn Youngkin in a state President Joe Biden carried by 10 points just last fall. Shifts in the state's swelling suburbs to the north near Washington, D.C., and around Richmond have benefited Democrats in recent years — particularly when former President Donald Trump was in office. And while no Republican has won statewide here in more than a decade, Biden's rough summer, dominated by the messy U.S. withdrawal from Afghanistan and a stalled domestic agenda, threatens to undermine McAuliffe's apparent advantages.

Much like Biden, McAuliffe is in some ways a throwback to the politics of the past, when the Democratic Party's leadership was dominated by older, white men who conducted business in smoke-filled rooms where the booze flowed freely. He developed his political playbook looking over the shoulders of Bill and Hillary Clinton, for whom he raised hundreds of millions of dollars as a chief political fundraiser in the 1990s and 2000s.

The Syracuse, New York, native wrote openly about his fundraising jaunts at casinos and golf courses with the political elite in the book “What a Party!” published years before he became governor.

More recently, however, the Democratic Party has become much more diverse, much less friendly to wealthy donors and much more sensitive to the behavior of its leaders. While McAuliffe is eager to talk about his accomplishments during his single term as governor, his gregarious personality can overshadow his policies during campaign swings.

He's equally as enthusiastic meeting a 4-year-old preschool student as a four-term U.S. senator, constantly joking, asking questions, citing statistics, squeezing shoulders. One of his favorite quips: “I got as much energy today as the day I was born!"

Jake Rubenstein, who served as McAuliffe's personal assistant during his 2013 campaign and his traveling chief of staff in 2021, said his boss is the same man he's always been.

“His style has never changed,” he said. “He's full go, all the time. He's the campaign manager. He's the chief of staff. He never stops working.”

McAuliffe proudly proclaims that he attends 10 to 15 political events each day, seven days a week. There have been few large rallies, however. Most of his gatherings during the COVID-19 pandemic have been invitation-only, policy-focused events with small groups of local health officials, educators and faith leaders, among others. Closed-door fundraising events are a regular part of the schedule as well.

McAuliffe will draw bigger crowds when a collection of high-profile, longtime political allies visit the state on his behalf in the coming days, including former President Barack Obama and Biden. Bill and Hillary Clinton, who attended his first inauguration, have not been a visible part of the campaign, though they hosted two private fundraising events and Hillary Clinton signed three fundraising emails on McAuliffe's behalf.

Democratic Del. Marcia Price, who is Black, acknowledged that some of her constituents are not excited about participating in the election but suggested the pandemic was to blame far more than McAuliffe's appeal.

McAuliffe remains a dominant force in Virginia politics. He won every one of Virginia's cities and localities, earning more votes than all his competitors combined in his party's nominating contest this spring, which included three candidates of color.

Still, Price, who declined to endorse anyone in the primary, is ready for more diverse party leadership.

“I’m not voting on who in the entire world I want to be governor. I have two choices ... and Terry is the best choice,” she said in an interview. “Is it time for diversity? Yes. Is it time for the party to really take a look at itself? Absolutely. But I can walk and chew gum at the same time. Terry’s got to be elected.”

McAuliffe's appeal to African Americans, who represent 20% of the state's population and a critical slice of the Democratic base, is central to his candidacy. His focus on racial equity also plays well among college-educated white people in the growing suburbs.

Almost every day on the trail, he highlights his decision as governor to restore voting rights to more than 200,000 felons — many of them Black. He also frequently reminds voters that in 2015 he ordered the removal of a state-sponsored license plate that featured the Confederate flag.

When asked, he stopped short of saying that Virginia still has a problem with systemic racism.

“You still have to go and deal with issues that go back many years here in Virginia, but we’re in a different place from when I was governor,” McAuliffe said.

The former governor is also eager to promote his plans for moving past the pandemic, for education and for protecting women's access to abortion, all of which he says are under attack by his Republican opponent. But McAuliffe may be most proud of his economic record while governor, which has drawn praise from some business-minded Republicans and independents.

As a businessman himself, McAuliffe led more than 30 trade and marketing missions to other countries to bring new business to the state. Unemployment fell from 5.7% to 3.3% while he was in office. In making the business deals, McAuliffe acknowledges that he worked long hours and sometimes enjoyed “a glass of wine.”

Robert Vaughn, who worked under Republicans and Democrats as a staffer and later the director of the House Appropriations Committee, described the former governor as a hard worker who surrounded himself with conscientious people and expected “good government.”

Vaughn, who occasionally attended business functions and social events at the governor's mansion, said McAuliffe seemed to truly relish the job, including the chance to “press the flesh” and entertain.

McAuliffe kept quality liquor stocked for parties — and enjoyed good wine and scotch — but always emphasized that he paid for it himself, according to Vaughn. He said he once saw McAuliffe at a bar in the Shockoe Slip district, enjoying “the libations” and buying folks a round.

McAuliffe was blunt when asked if he thinks he should curtail the partying culture he's known for.

“I have nothing to change,” he told The Associated Press.

“That’s how I recruited 1,100 companies to come to Virginia. But yeah, they would come over, and I would stay up till 1 (a.m.) talking. But I was always working for Virginia. I had business leaders, legislative leaders. These weren't parties. These were working hard," McAuliffe explained. "You bet I work hard. No one will ever outwork me. That’s how I got so much done."

Aubrey Layne, who describes himself as an independent and served as McAuliffe’s secretary of transportation, said the former governor has both character and competence. He said he set high expectations for his staff, held them accountable and worked hard himself.