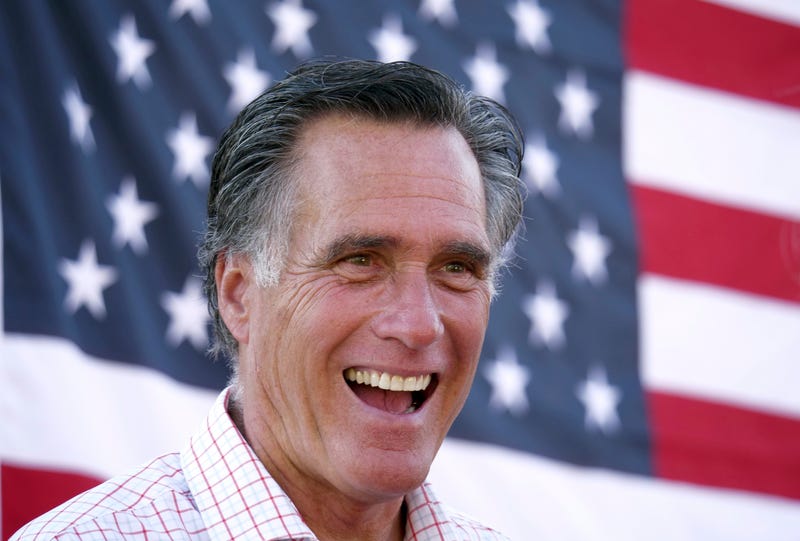 SALT LAKE CITY (AP) — Mitt Romney isn't up for reelection this year. But Trump-aligned Republicans hostile toward the Utah senator have made his name a recurring theme in this year's primaries, using him as a foil and derisively branding their rivals “Mitt Romney Republicans."

Republicans have used the concept to frame their primary opponents as enemies of the Trump-era GOP in southeast Michigan, Ohio and Pennsylvania. The anti-tax group Club For Growth, among the most active super PACs in this year's primaries, used “Mitt Romney Republican” as the central premise of an attack ad in North Carolina's Senate primary.

But nowhere are references to Romney Republicanism as common as they are in Utah. Despite his popularity with many residents here, candidates are repeatedly deploying “Mitt Romney Republican” as a campaign trail attack in the lead-up to Tuesday’s Republican primary.

Herrod, who went to Las Vegas to campaign for Romney in 2012, said in an interview that referring to Romney was effective shorthand — a way to tell voters about his own belief system as well as that of incumbent Republican Rep. John Curtis. Herrod has attacked Curtis for his positions on energy policy and for founding Congress' Conservative Climate Caucus.

“In the midst of a campaign, it’s kind of tough to draw a line. I just put it in terms I thought people would understand,” Herrod said.

The Curtis campaign said the congressman was more focused on legislation and passing bills than branding. “Congressman Curtis doesn’t spend his time labeling himself or other Republicans,” his campaign manager, Adrielle Herring, said in a statement.

Much like Herrod, Andrew Badger, a candidate running in northern Utah's 1st Congressional District, frames his primary campaign as a “tug of war” between two competing factions within the Republican Party. He describes one as the moderate, compromise-friendly wing embodied by Romney and the other as the conservative wing embodied by Utah Sen. Mike Lee, a frequent guest of FOX News who is often the Senate's lone “no” vote.

Both Badger and Herrod acknowledge attacking Romney may turn off some voters, four years after he easily defeated a right-wing state lawmaker in Utah’s Republican primary and a Democrat in the general election. But they question the durability of his support given how the last six years have broadly transformed Republican politics.

“There’s a lot more frustration, and it’s only building. I don’t think he would win in a vote today, certainly not in a Republican primary,” Badger said.

Badger in his campaign has focused on simmering outrage stemming from the 2020 election and anger over coronavirus mandates and how race, gender and sexuality are taught in K-12 schools. He has attempted to draw a direct line between Romney and his opponent, incumbent Rep. Blake Moore, by attacking Moore for being one of 35 House Republicans to vote to create an independent commission to investigate the Jan. 6 insurrection.

In a district where support for Trump remains strong, he’s likened Moore’s vote to Romney’s two votes in favor of impeachment.

“These folks like Mitt Romney and Blake Moore, they always cave to the left when the pressure gets turned on them,” Badger said. “We’re not going to compromise for the sake of compromise.”

Moore did not vote for impeachment. After the Senate scuttled the commission, Moore, along with all but two House Republicans, voted against the creation of the Jan. 6 select committee that ultimately convened.

In response to Moore being labeled a “Mitt Romney Republican," Caroline Tucker, the congressman's campaign spokesperson, said he could be best described a “Big Tent Republican” who doesn't think the process of lawmaking requires abandoning his conservative principles.

Jason Perry, director of University of Utah’s Hinckley Institute of Politics, said the label “Mitt Romney Republican” may appeal to some Republican primary voters, but given Romney’s popularity, it likely won’t work in Utah, he said.

“They’re appealing to a segment of the Republican Party but probably do not have the numbers on that far-right side to be successful,” Perry said.