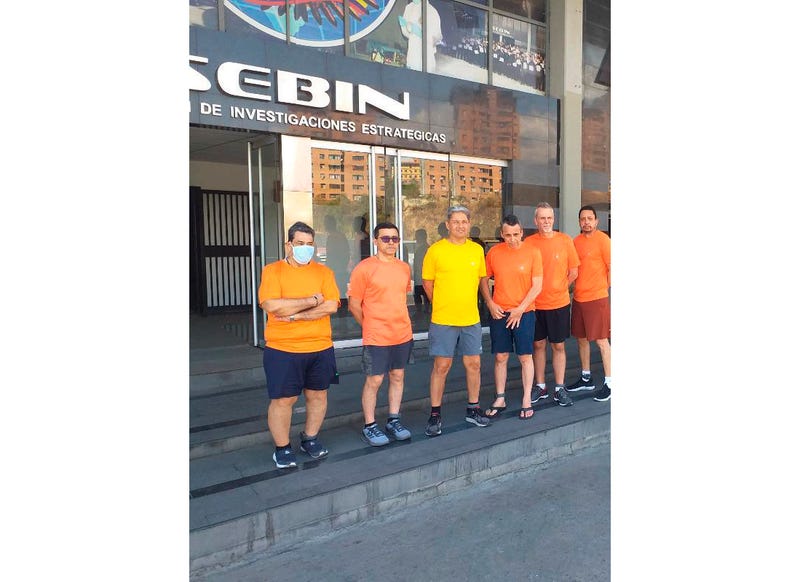 WASHINGTON (AP) — In a rare softening of hostile relations, Venezuela freed on Saturday seven imprisoned Americans in exchange for the United States releasing two nephews of President Nicolás Maduro’s wife who had been jailed for years on narcotics convictions.

The swap of the Americans, including five oil executives held for nearly five years, follows months of back channel diplomacy by senior U.S. officials — secretive talks with a major oil producer that took on greater urgency after sanctions on Russia put pressure on global energy prices.

The deal amounts to an unusual gesture of goodwill by Maduro as the socialist leader looks to rebuild relations with the U.S. after vanquishing most of his domestic opponents. While the White House denied any change in policy toward Venezuela is afoot, the freeing of Americans could create political space for the Biden administration to ease crippling oil sanctions on Venezuela if Maduro shows progress in on-again, off-again talks with his opponents.

“I can’t believe it,” Cristina Vadell, the daughter of Tomeu Vadell, one of the freed Americans, told The Associated Press on Saturday.

Holding back tears of joy on her 31st birthday, she said: “This is the best birthday present ever. I’m just so happy.”

The transfer took place Saturday in the Caribbean island of St. Vincent and Grenadines, which is ruled by an ally of Maduro, three people in Venezuela briefed on the matter told the AP on the condition of anonymity. The prisoners arrived from their respective locations in separate planes, the Biden administration said.

“These individuals will soon be reunited with their families and back in the arms of their loved ones where they belong,” President Joe Biden said in a statement.

Those freed include five employees of Houston-based Citgo — Vadell, Jose Luis Zambrano, Alirio Zambrano, Jorge Toledo and Jose Pereira — who were lured to Venezuela right before Thanksgiving in 2017 to attend a meeting at the headquarters of the company's parent, state-run-oil giant PDVSA. Once there, they were hauled away by masked security agents who busted into a Caracas conference room.

The men were convicted of embezzlement in 2020 in a trial marred by delays and irregularities and sentenced to between eight years and 13 years in prison for a never-executed proposal to refinance billions in the oil company’s bonds.

The State Department had regarded all the men as wrongfully detained.

To facilitate a deal, Biden granted clemency for Franqui Flores and his cousin Efrain Campo, nephews of “First Combatant” Cilia Flores, as Maduro calls his wife. The men were arrested in Haiti in a Drug Enforcement Administration sting in 2015 and convicted the following year in New York in a highly charged case that cast a hard look at U.S. accusations of drug trafficking at the highest levels of Maduro’s administration.

Referring to the men only as Venezuelans “unjustly imprisoned” in the U.S., the Maduro government in a statement said it “welcomes the outcome of these talks and hopes for the preservation of peace and harmony with all the nations of our region and the world.”

The Biden administration has been under pressure to do more to bring home the roughly 60 Americans it believes are held hostage abroad or wrongfully detained by hostile foreign governments. While much of the focus is on Russia, where the U.S. has so far tried unsuccessfully to secure the release of WNBA star Brittney Griner and another American, Paul Whelan, Venezuela has been holding the largest contingent of Americans suspected of being used as bargaining chips.

At least four other Americans remain detained in Venezuela, including two former Green Berets — Luke Denman and Airan Berry — involved in a slapdash attempt to oust Maduro in 2019, and two other men — Eyvin Hernandez and Jerrel Kenemore — who, like Khan, were detained for allegedly entering the country illegally from neighboring Colombia.

“To all the families who are still suffering and separated from their loved ones who are wrongfully detained — know that we remain dedicated to securing their release,” Biden said in his statement.

Saturday's swap came together quietly over several months of backchannel talks. Roger Carstens, the special presidential envoy for hostage affairs, has made multiple visits to Venezuela over the last year to discuss potential deals and to meet with the detained Americans.

In July, Maduro officials upped the ante in meetings in Caracas with Carstens and Ambassador James Story, who heads the Venezuela Affairs Unit in neighboring Colombia. It substitutes for the U.S. Embassy the Trump administration shuttered in 2019 to protest Maduro's reelection in what was widely seen as a sham election.

In exchange for freeing the nephews and insider businessman Alex Saab, Maduro was willing to release all Americans, a U.S. official briefed on the outreach told the AP.

In the end, Saab — Venezuela considers him a diplomat and U.S. prosecutors a corrupt regime enabler — was never seriously considered, according to the U.S. official, who insisted on anonymity to discuss the talks.

Unlike the nephews, who were arrested as a result of a drug sting and are about halfway through 18-year sentences, Saab bitterly fought his extradition to the U.S. from Cape Verde, where he was arrested in 2020 during a stopover en route to Iran. He is now awaiting trial in Miami federal court on charges of siphoning off millions in state contracts.

Still, it's unclear if the prisoner release will lead to a broader thaw in relations.

The Biden administration is constrained in its engagement with Maduro, especially in the battleground state of Florida, where Latino voters whose families fled authoritarian rule in Cuba and Venezuela hold major sway.

Although the U.S. in the last six months has struck similar deals with Russia, and more recently with the Taliban, a senior Biden administration official downplayed any suggestion that it was caving to hostage-takers, saying such exchanges remain “extraordinarily rare.” The official, who spoke to reporters on condition of anonymity under ground rules set by the administration, also pointed to an executive order from this summe r that sought to impose new costs on countries that jail Americans without cause.

Meanwhile, many Maduro supporters remain distrustful of the U.S. “Empire," recalling the Trump administration's decision to impose sanctions on a Venezuelan governor who brokered the release of another American, Joshua Holt, in 2018.

However, some longtime Venezuela watchers say they’re hopeful this time will be different.

A visit to Caracas in March by Juan Gonzalez, the top National Security Council adviser on Latin America, was itself a remarkable gesture toward a leader whom the U.S. considers illegitimate and has indicted on narco-terrorism charges. The Biden administration has also promised to review sanctions if Maduro can point to progress in talks with opponents that had been taking place in Mexico that are aimed at creating fairer conditions for 2024 presidential elections

“President Biden did the right thing,” said Caleb McCarry, a former Republican staffer who met recently with Maduro in a bid to free Americans and improve bilateral relations. "This is serious diplomacy and can only help put the Mexico negotiations back on track. It’s a win for the families, the American people and the Venezuelan people.”