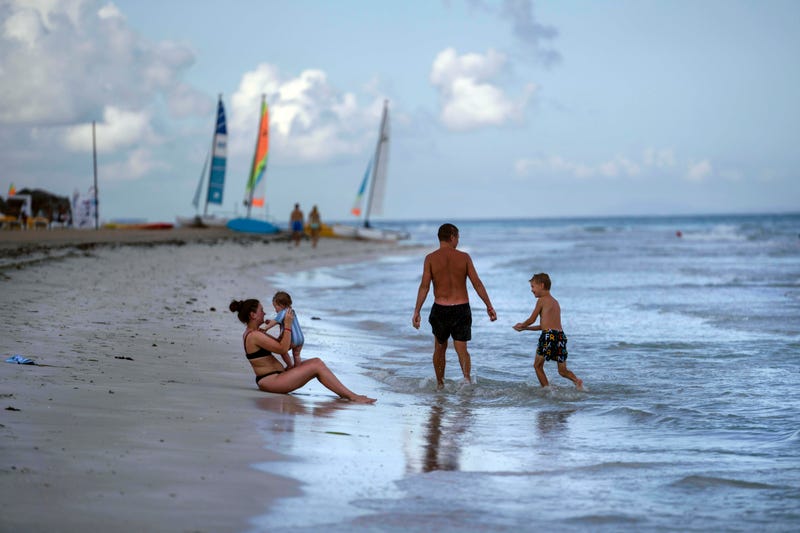 WASHINGTON (AP) — The Biden administration says it will expand flights to Cuba, take steps to loosen restrictions on U.S. travelers to the island, and lift Trump-era restrictions on remittances that immigrants can send to people on the island.

The administration said it will also move to reinstate the Cuban Family Reunification Parole Program, which has a backlog of more than 20,000 applications, and increase consular services and visa processing.

“With these actions, we aim to support Cubans’ aspirations for freedom and for greater economic opportunities so that they can lead successful lives at home,” State Department spokesman Ned Price added. “We continue to call on the Cuban government to immediately release political prisoners, to respect the Cuban people’s fundamental freedoms and to allow the Cuban people to determine their own futures.”

The policy changes come after a review that began soon after a series of widespread protests on the island last July.

Former President Donald Trump had increased sanctions against Cuba, including the cancellation of permits to send remittances and the punishment of oil tankers bound for the island.

These measures and the pandemic contributed to an economic crisis in Cuba, where people suffer from shortages of basic products, power outages and rationing.

The economic situation led thousands of people to the streets across Cuba on July 11, 2021 — the largest such protests in decades on the island. Many people were frustrated with shortages and low salaries, as well with the socialist government. Nongovernmental organizations have reported more than 1,400 arrests and 500 people sentenced to up to 20 years in prison for vandalism or sedition.

In recent weeks, both the U.S. and the Cuban governments have started some conversations, amid a surge of Cubans trying to emigrate illegally to the U.S.

The first week of April, the U.S. Embassy in Havana resumed processing visas for Cubans, though on a limited basis, more than four years after stopping consular services on the island amid a hardening of relations.

Sen. Robert Menendez, a New Jersey Democrat who heads the Senate Foreign Relations Committee, said the moves send the “wrong message” to Cuban President Miguel Díaz-Canel's government. Menendez was particularly critical of the administration decision to reinstate travel by groups for educational and cultural exchanges as well as some travel for professional meetings and professional research on the island.

“I am dismayed to learn the Biden administration will begin authorizing group travel to Cuba through visits akin to tourism,” Menendez said. “To be clear, those who still believe that increasing travel will breed democracy in Cuba are simply in a state of denial.”

Two senior administration officials, who briefed reporters on the condition of anonymity, noted that the Treasury Department has the authority to audit groups that are organizing travel and will ensure that travel is purposeful and in accordance with U.S. law. The U.S. is restricting American tourism on the island and won’t allow individuals to travel there for educational purposes, officials said.

One official defending the move noted that the president has underscored his belief that “Americans are the best ambassadors for democratic values.”

Biden said as a presidential candidate that he would revert to Obama-era policies that loosened decades of embargo restrictions on Havana. Meanwhile, Republicans accused him of not being supportive enough of Cuban dissidents.

President Barack Obama's rapprochement was reversed by Trump, who sharply curtailed remittances that Cuban Americans were allowed to send to relatives on the island, barred financial and commercial transactions with most Cuban companies affiliated with the government or military and, in his final days in office, redesignated Cuba a “state sponsor of terrorism,” in part for its support of Venezuelan President Nicolas Maduro.

Sen. Rick Scott, R-Fla., said he would put a hold on all relevant Biden nominees requiring Senate confirmation until the decision is reversed.

“Biden can frame this however he wants, but this is the truth: this is nothing but an idiotic attempt to return to Obama’s failed appeasement policies and clear sign of support for the evil regime,” Scott said.

Cuban Foreign Minister Bruno Rodríguez said on his Twitter account called the Biden administration move "a limited step in the right direction”. He added that the decision doesn’t change the embargo nor most of Trump measures against the island.

“To know the real scope of this announcement, we must wait for the publication of the regulation that will determine its application,” he said.

In Havana, news of the Biden moves was spreading slowly, first among people with access to the internet.

“Beyond the human significance, because families will reunite and there will be a cultural exchange, there will be a blossom of these entrepreneurs little by little,” said Erich Garcia, a programmer and local cryptocurrency expert, referring to the small businesses that opened on the island after some internal political and economic changes, and that got a boost after the historic thaw of relations with Cuba under the Obama administration.

In 2010, then-President Raúl Castro promoted an unprecedented, albeit limited opening to the private sector, allowing hundreds of small businesses to open. Some of them targeted tourists who came in significant numbers at the end of 2014 when Obama announced the new era with the island.

When Trump announced the new restrictions to Cuba, this private sector suffered as tourism declined.

White House officials said the U.S. would also increase its diplomatic presence, which was dramatically scaled back in 2017 in response to a spate of unexplained brain injuries suffered by American diplomats, spies and other government employees posted to the island.

The CIA earlier this year determined that it is unlikely that Russia or another foreign adversary has used microwaves or other forms of directed energy to attack the hundreds of American officials in postings around the globe who have attributed symptoms associated with brain injuries to what’s come to be known as “Havana syndrome.”

An administration official said it did not yet have a conclusion about the mysterious health incidents. Officials did not offer a timeline for ramping up the U.S. diplomatic presence in Cuba.