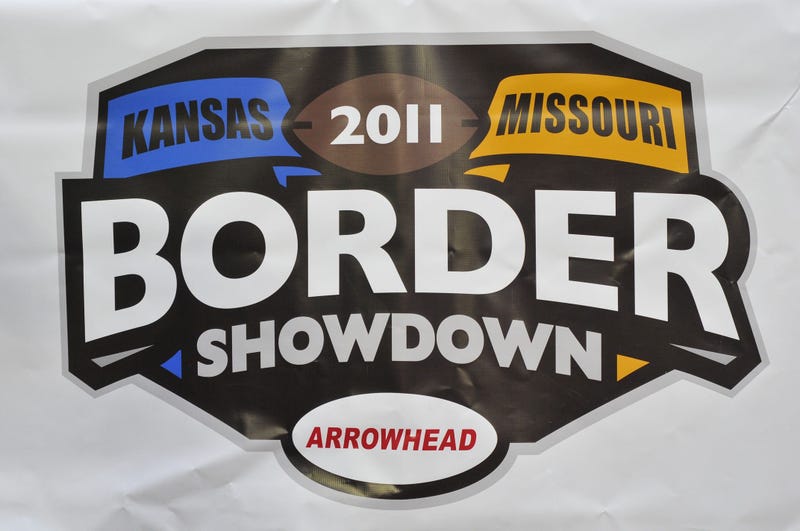 The dates have been announced for the resumption of the Border Showdown between Missouri and Kansas in football and they haven't played since 2011.  Mizzou holds a slight edge in the series and have won the last 3.  The first game was played back in 1891.

COLUMBIA, Mo. – The ice has thawed between two of the nation’s fiercest football rivals, as the University of Missouri and the University of Kansas have agreed to a four-game series to be played over an eight-year period, beginning in 2025.
The series will resume with games in 2025 (Sept. 6, 2025) and 2026 (Sept. 12, 2026), with the final two games set for 2031 (Sept. 6, 2031) and 2032 (Sept. 11, 2032). Mizzou will serve as the home team in the odd-number years, with Kansas serving as home team for the even-numbered years.
Mizzou and Kansas have played 120 times on the gridiron, but not since 2011 – the year before Mizzou joined the Southeastern Conference.  At the time, the rivalry was the second-most played among Division I programs (it now stands eighth).  The Tigers won the last three meetings between the border rivals, and five of the last six overall, to take a 57-54-9 lead in the series.
“I’m excited for our fans to have the chance to be part of this historical rivalry again,” said Head Coach Eliah Drinkwitz.  “I know there has been some time off, but I’m positive the energy and excitement will be there right away for everybody.  While I haven’t been part of Mizzou/KU, I have been involved in some pretty intense rivalries and I do believe that is a big part of what makes college football so special to people,” he said.
The football news mirrors a similar resumption of the MU/KU border rivalry in the sport of men’s basketball, as the two schools announced a six-game hoops series beginning with the 2020-21 season this past October.
“We are very excited about renewing this historic rivalry that our fans are so passionate about,” said Director of Athletics Jim Sterk.  “College football is better with rivalries like this, and our fans deserve to have it return.  We’re pleased to make this happen, and we look forward to restoring this important tradition at Mizzou,” he said.
For all the latest on Mizzou Football, stay tuned to www.MUTigers.com and follow the team on Twitter (@MizzouFootball) and like the team on Facebook and Instagram.

**For the latest keep it here at 610Sports.com.