Though he might not have been on the level of Pablo Sanchez, MVP Baseball's Jon Dowd was one of the most-feared sluggers in video-game history.

Dowd, though, was only created to make up for the fact that that Barry Bonds, arguably the most dominant player in the history of the sport, wasn't featured in MVP Baseball. Bonds told the MLBPA in November of 2003 that he planned to be individually licensed. So even though MVP Baseball was an officially-licensed MLB game, EA Sports would have needed to pay Bonds' team a separate fee for him to be in the game. Rather than doing that, Electronic Arts replaced Bonds with Dowd, named after one of the producers of the game.

MLB.com's Matt Monagan did an incredible feature on the real-life Dowd, one that we would recommend reading. A specific story stood in the piece, though.

One of the reason's that the MVP Baseball games were so popular is because they were voiced by Duane Kuiper and Mike Krukow, the television voices of the San Francisco Giants. The duo, no strangers to mischief, actually had the real-life Dowd sign a baseball, which they eventually made sure found its way to Bonds' locker:

"One of my colleagues at the time was in a recording session with them and they joked that I should give something to Barry," Dowd remembers. "So, I actually signed a baseball and they put it in Bonds' locker. I don't know what the response was, but I know Krukow and Kuiper thought it was funny."

The story is probably made even better by the fact that we don't know how Bonds reacted to the signed ball being gifted to him. Maybe he was angry, but chances are he had no idea that he was replaced in the video game by a man named Jon Dowd, so the most likely reaction he had was to be confused and ultimately dispose of the ball. Of course, Kuiper and Krukow may have explained who Dowd was to Bonds. If that caused Bonds to eventually purchase the game, realize who Dowd was and become part of the MVP Baseball fanbase, that may be the best story. Perhaps next to his own memorabilia in his home, baseball's all-time Home Run King still has the signed Dowd ball. 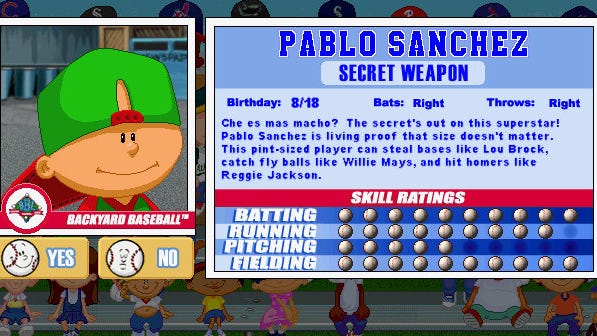 Inside How Pablo Sanchez Became The Greatest Slugger Ever