The NFL’s Super Wild Card Weekend did not disappoint with high-flying action all weekend. It featured a few blowouts but also a few blowouts-turned-comebacks. None was more impressive than the Jaguars overcoming a 27-0 deficit to defeat the Chargers 31-30.

The Chiefs enjoyed their bye last week and now face off against that hungry Jaguars team in the divisional round. Jacksonville not only came back to win in the wild-card round, but the Jags also overcame a 2-6 start – and 3-7 after a loss to the Chiefs – to win the AFC South at 9-8.

Cody Tapp, Nick Schwerdt, and Kayla Knierim of the Audacy Original Podcast “It’s Always Gameday In Kansas City” discussed if the Chiefs should be worried about the Jaguars given Andy Reid’s lack of a killer instinct.

“If I said ‘Hey, I want you to put together an album, the five worst things Andy Reid does like it’s a greatest hits,’ on that list for sure is Andy doesn’t close games; Andy doesn’t put teams away,” Tapp said (3:20 in player above). “Doesn’t run the ball is on there, sure, the normal – clock management. They’re on there, but so is does not put his foot on the gas, does not just bury teams, tries to grind out ugly wins, and frustrates the hell out of you. And if this postseason taught us something it’s that’s a very dangerous methodology that could get you in serious trouble.”

Tapp acknowledged that Reid may have figured that out and knows it by know, though. This year, in particular, the 14-win Chiefs played some games that were closer than they needed to be. They’ve also blown double-digit leads multiple times in the last few years to the Bengals, who could be their next opponent in the AFC championship game.

Of course, Reid has already blown a 28-point lead in the playoffs back in 2014 against the Colts. That may be in the back of some people’s minds heading into this game against a Jaguars team that just overcame a 27-point deficit.

But on the flip side, perhaps that still isn’t something that Reid really thinks about.

“I don’t know if that’s something that really even crosses his mind. I don’t think that’s entering his headspace this week, which is gotta keep pouring it on,” Schwerdt said. “I think that’s always the goal, but the flip side of that has been true where you feel like the Chiefs have a chance to put the game away and then you just want them to run out the clock, right? Let’s kill some clock. Let’s run the ball. And then they won’t do that because he’s still being ultra-aggressive with playcalling trying to pass in obvious running situations in the fourth quarter.”

Schwerdt expressed his concern with Reid being too focused on the playcalling and what the best play is rather than the best play for that situation.

“Sometimes I don’t think he’s always taking into account what’s the score? How much time’s left? How is the other team’s offense performing? Should we take that into account?” he said. “I think for him it’s just – and it’s part of what makes him so great – is that he is just so laser-focused on playcalling that the situational stuff maybe gets kind of lost or put on the back burner sometimes.”

Knierim also knows that no lead is safe, especially in the playoffs.

“I’ll be honest, I’m nervous. Postseason makes me nervous in general,” she said. “But yeah, we can’t have any mercy against the Jags on Saturday. I know all of these coaches are his friends but I don’t want to sweat this out and I’m worried that’s what’s going to happen.”

The Chiefs may be big favorites against the Jaguars but anything can happen in the playoffs. Jacksonville showed that last week so Kansas City should take that into consideration and show no mercy this weekend. 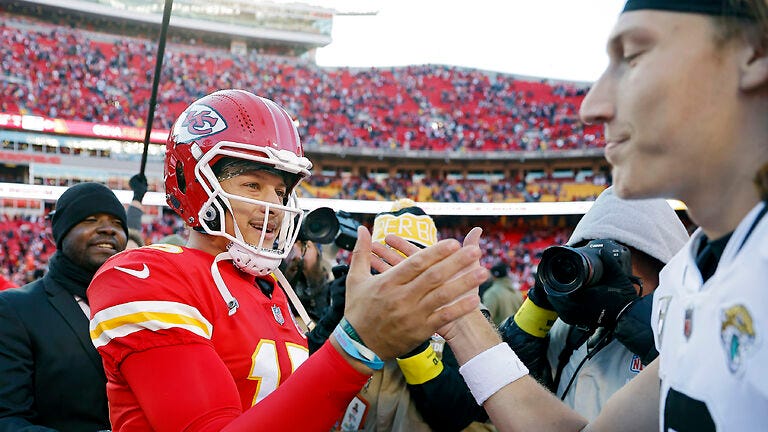