(610 Sports) -- Here is mock 3.0 with all 8 selections. Comp picks were awarded last week and the Chiefs received an extra 4th rounder and a 5th rounder for losing Kendall Fuller and Emmanuel Ogbah. The actual order in round 6 hasn’t been determined (It was the trade for Deandre Washington).

With the Chiefs releasing Eric Fisher and Mitch Schwartz, finding lineman is imperative. The Chiefs did not land Trent Williams at LT and Riley Reiff signed with Cincinnati. Alejandro Villanueva still remains an option (would love to see this) but left tackle seems to still be the biggest need despite signing somebody in free agency. The guard situation is nailed down with Joe Thuney and Kyle long and there is some competition there at will with LDT coming in and Nick Allegretti.

My first Chiefs mock of the year:https://t.co/Rvhh7cMqN6

My Chiefs mock 2.0 this week with the comp picks:https://t.co/4Vk6kDhCrY via @610SportsKC 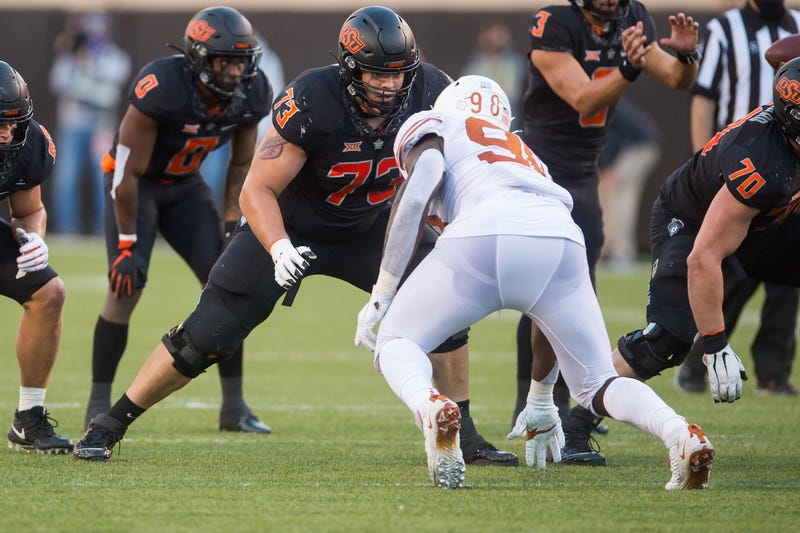 Round 1-pick 31-Teven Jenkins, Tackle- Oklahoma State 6’6 320
﻿Redshirted at OSU his first year and has gained 30 lbs. Often described as a mauler he has the toughness the Chiefs line is looking for and a nastiness that could be a tone-setter for years to come. Has played guard and both tackle positions in college. Offensive line and protecting Patrick Mahomes should be the 1st line of business for the Chiefs. It might take him a quarter of the season to develop. Could they get by with Yasir Durant who started 2 and a half years at left tackle at Mizzou or could it be a journeyman cheap option on a prove-it deal which I do expect to happen until Jenkins is ready. He is a guy that could be in my opinion a long-term player in the NFL. His toughness stands out as he wants to punish you. I think his athleticism at that size and toughness would be a welcome addition at tackle. With the Chiefs signing Thuney and Long the LT position still remains the biggest position of need. We could still see Villananueva or Okung end up a Chief and that is what I am pulling for as you get that in the short term and let Jenkins develop. However, if they don’t go through free agency Jenkins might have what it takes to start day 1.

-If Jenkins is already picked------then this is the pick: 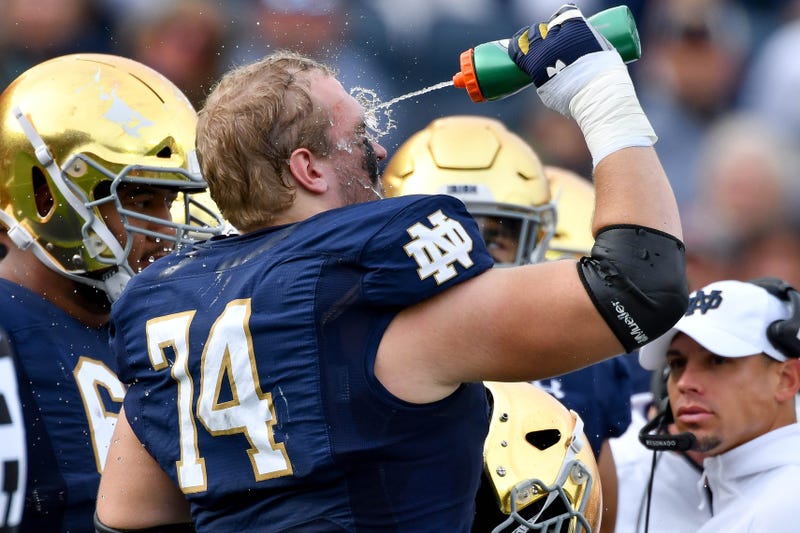 Round 1 – No. 31- Liam Eichenberg, Tackle- Notre Dame 6’6” 302
﻿Notre Dame has been a lineman factory this past decade and Brian Kelly has had a first rounder at tackle every year he has been there. Had Tevan Jenkins here in the first mock and a good chance he is taken but a bunch of his experience had been at right tackle. Eichenberg is ready to step in as a starter and to me that is most important for the Chiefs and he is a left tackle. Probably could stand to gain a few more pounds buy so did Eric Fisher and that wasn’t a problem. Most game film of Eichenberg is good….he did however struggle a bit against Alabama in the playoffs but he was an All American on most list and is a guy ready to go.

Plus he didn’t allow a sack on 400 plus attempts this year:

Liam Eichenberg: Only tackle to not allow a sack on 400+ pass-blocking snaps this season 💪 pic.twitter.com/ZCA6K75OHK 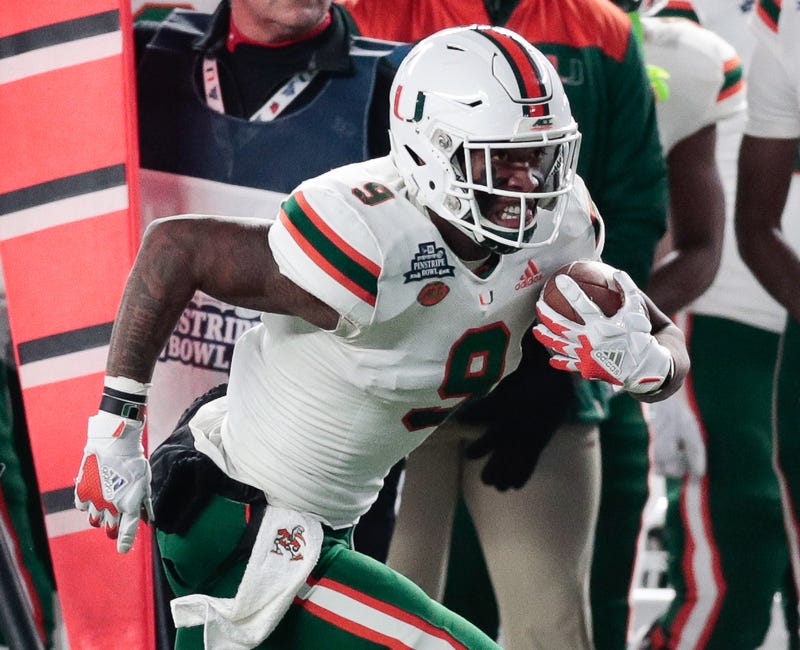 Round 2-pick 63-Brevin Jordan, Tight End- Miami-6’3 245
﻿With Kyle Pitts and Pat reiermuth off the board this would give the Chiefs a future TE1—Had 38 catches for 576 yards and 7 touchdowns with a 15.2 average yard per catch which were all career highs.

Whether 1-on-1 pass pro, sealing DE in run game, or whamming a NT - Jordan is willing & capable!

He is best ‘all-around’ TE in this 2021 NFL Draft class pic.twitter.com/QulYjZ0s9Y

Not only can he stretch the field as a receiver as a tight end he can also block which would help out the run game immensely.

He has developed each year including starting 11 games as a true freshman. The Chiefs have shown interest in the tight end:

#Miami TE Brevin Jordan has met with several NFL teams via Zoom, but he lists the following as the teams he has consistently heard from: #Packers, #Patriots, #49ers, #Seahawks & #Chiefs.

There's a TON of interest in him, & it's easy to see why once you turn the tape on #NFLDraft

People might not see the need in tight end but having another TE to go along with Kelce is imperative. The Chiefs like using multiple tight ends and imagine one with the skill set of Brevin Jordan. Look at Kelce’s #s to see how much the Chiefs like using the tight end in this offense. Plus they can run the heck out of 12 personnel (1 back and 2 tight ends) and have another pass receiver as tight end. I view the tight end as important as WR in this offense. Staying with this pick I just really like this player. 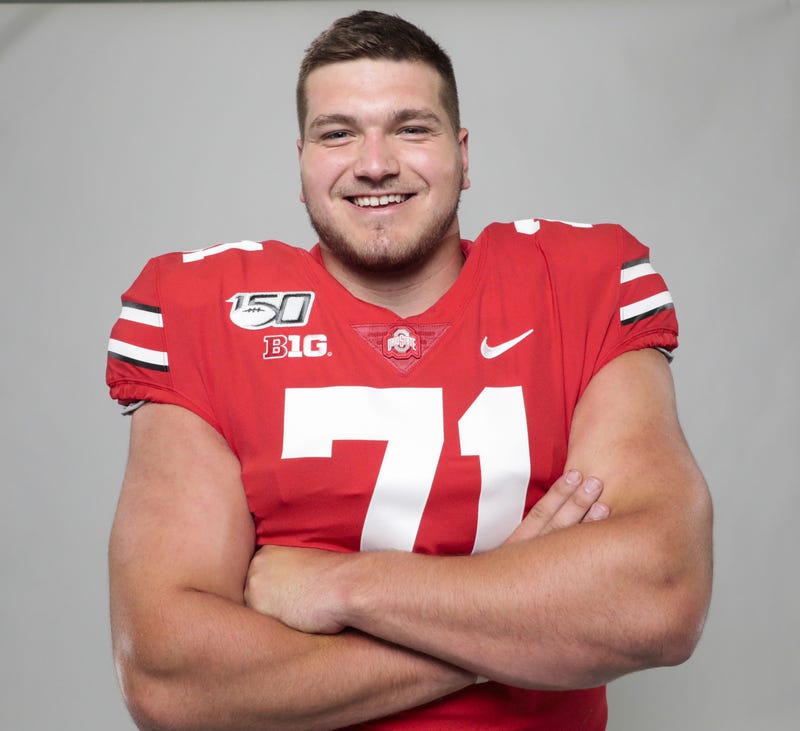 Round 3 – No. 94-Josh Myers, Center- Ohio State-6’ 5” 312 lbs
﻿A center with a ton of potential and at a position of need at this time. The type of guy I could see playing in this league a long time.  Good size and a hard nose blocker. I can see the problem solved at center for many years to come. Tremendous job blocking for Justin Fields this year.

I thought this was a good write up on him-

Positives: Explosive blocker at the pivot who displays terrific strength in his game. Fires off the snap, turns defenders from the line, and keeps his feet moving. Gets movement run blocking, fires out to the second level, and seals linebackers from the action. Anchors in pass protection, gets a shoulder on defenders, and takes them from their angles of attack. Effective with the shotgun snap. Effectively quarterbacks the offensive line. 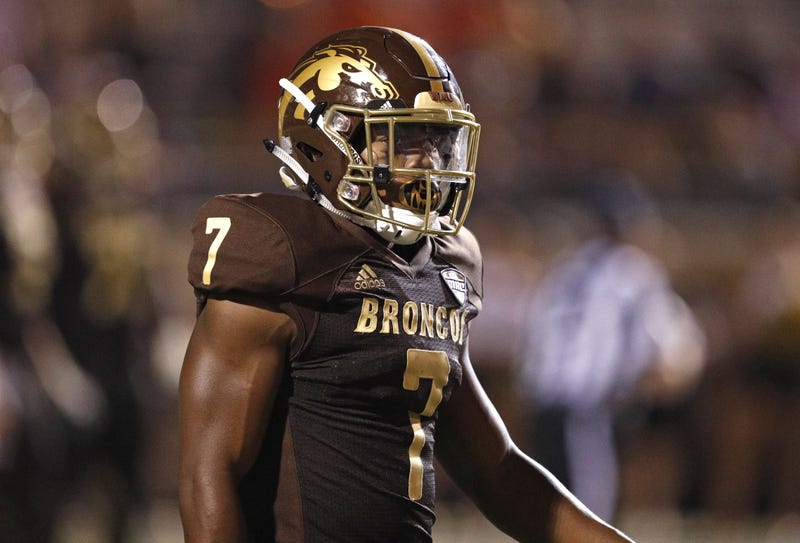 Round 4 – No. 136-D’Wayne Esdridge, WR- Western Michigan-5’9” 190
﻿Western Michigan-Serious speed and a serious downhill threat. Averaged more than 20 per reception his last 3 years at Western Michigan and a confident individual. Would love to see him with Mahomes and in the receivers room at One Arrowhead Drive. Has a running back background as well and even played some corner in college. He also has a kick return touchdown as well. His laser timed speed in 2018 was 4.3. Loved a comparison I saw on him from CBSSports.com mock, of Curtis Samuel. 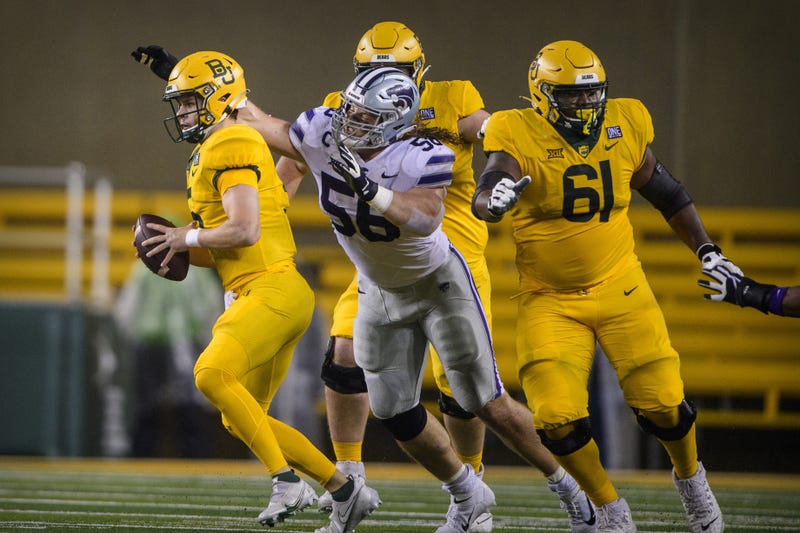 Round 4 – No. 144 Wyatt Hubert, DE-Kansas State-6’-3”270 lbs (comp pick for losing Kendall Fuller)
﻿Will probably be switching to linebacker in the NFL. I have watched him a ton and the motor this guy has you just can’t teach. Was standing up on the line and thrived when he was.  Back-to-back first-team All-Big 12. 20 sacks and 33 tackles for loss in his 3 years at KSU. I am staying with him with this pick I just like the motor too much. 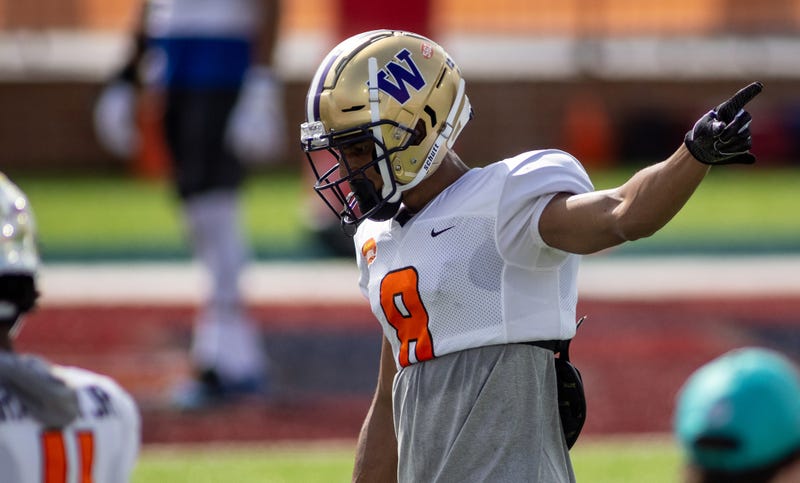 Round 5 – No. 175 Keith Taylor, CB- Washington-6’2” 191 lbs. (comp pick for losing Emmanuel Oghah)
﻿Haven’t hit corner and with Breeland and Ward with free agency status this might be a need. Last year Sneed was a 4th rounder so I really trust Veach and imput from Spags in these round. Press man or zone corner and has played on inside and outside and a very good run tackler. Elevated himself in Senior Bowl. Won the Earle T. Glant Tough Husky Award. Touch physical corner and still a position they should look at in this spot. 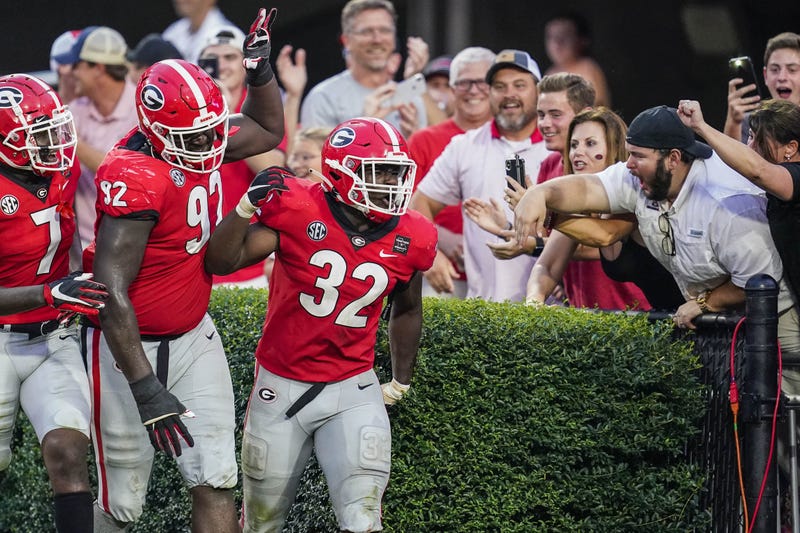 Round 5 – No. 181-Monty Rice, LB- Georgia 6’1” 235 lbs
Linebacker who can really move sideline to sideline with great range. One of 5 finalists for the Butkus Award and a tackling machine. Brett Veach likes players from the SEC and he would like Monty Rice. First-team AP All-SEC. Would be a good addition in the future and develop right alongside Willie Gay.

Tony Pauline’s scouting report (Profootballnetwork.com)
﻿Positives: Slightly undersized linebacker who displays speed in every direction. Efficient, breaks down well, and takes proper angles to the action. Fast in pursuit, possesses a closing burst, and attacks ball handlers. Instinctive, quickly reads and diagnoses the action, and flashes on the scene. Effectively quarterbacks the defense making the calls. Gets depth on pass drops, goes sideline to sideline, and makes plays in space against speedy receivers.

Monty Rice having to run with Waddle out of the bunch... Not too shabby! I know ball is underthrown but Rice can run! pic.twitter.com/VbyiGMzZuj 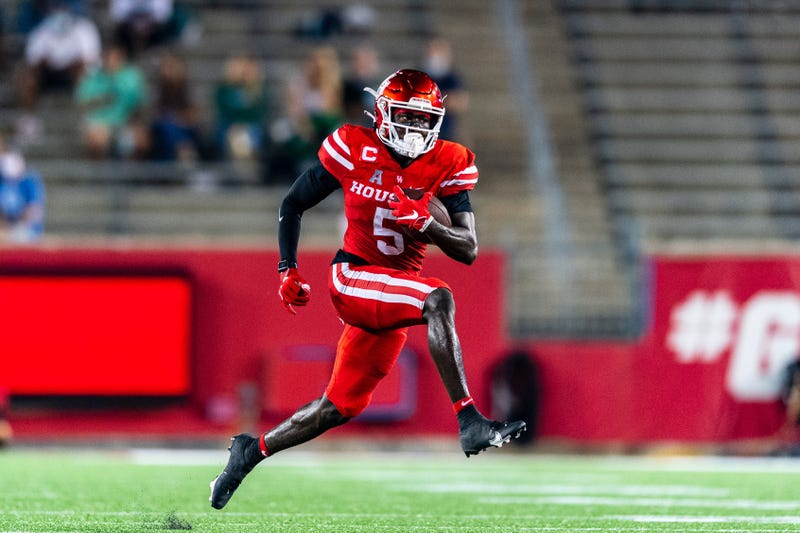 Round 6 – No. 207 Marquez Stevenson, WR- Houston 5’10” 182 lbs. (Acquired from Miami in exchange for RB DeAndre Washington)
﻿Big time speed who says he runs 4.38 to 4.40. He turned some heads at the Senior bowl. Was a team captain at Houston and besides being an outstanding receiver has 3 kick returns for touchdowns. He could help the Chiefs in the return game as well. Imagine him with Dave Toub!

Tony Paulin’s scouting report (Profootballnetwork.com)-
﻿Positives: Three-year starter who continually displayed himself as a game-breaking receiver. Displays good recognition, is always on the same page as his quarterback, and plays with balance as well as body control. Quickly releases off the line of scrimmage, fires into breaks, and stays low on exit, snatching the ball out of the air with his hands. Sells routes and uses his frame to shield away defenders or protect the pass.

Competes to come away with the difficult grab even when defenders are draped on him. Nicely tracks the deep pass in the air, looks the ball into his hands, and makes the difficult over-the-shoulder reception at full speed. Possesses good eye/hand coordination. Plays to his 40-time.

One thing you know you’re getting with Houston WR Marquez Stevenson: speed. Vertical and YAC threat for days #SeniorBowl pic.twitter.com/PrtKY6jAnI

That is mock 3.0 with a heavy offensive line emphasis: Jay Binkley