Everyone has had their thoughts on how Doug Pederson's Philadelphia Eagles handled their Week 17 matchup with the Washington Football Team, and MVP candidate Patrick Mahomes is no exception.

After a mediocre performance from Jalen Hurts, in which he threw an interception but rushed for two touchdowns, the Eagles' potential quarterback of the future was pulled in favor of backup quarterback Nate Sudfeld, the latter of which entered the game at the 12:35 mark in the fourth quarter. The Eagles were down three points and had already passed up an opportunity to tie the game on the previous drive, instead going for it on fourth and four.

It smelled a little bit fishy, to say the least. 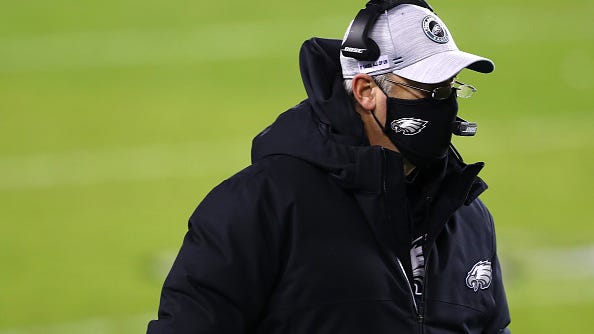 Pederson responded to the accusations saying that he benched Jalen Hurts and tanked the game for the Eagles, claiming on SportsRadio 94WIP that what went down on Sunday night was part of a play he had all along.

But while the countless Eagles, Giants and Washington Football Team continue to make their cases in the moral, ethical and logistic dilemma that was presented to us as Hurts watched from the sidelines, it might be helpful to have a more neutral and level-headed voice weigh in on the matter. Patrick Mahomes spoke about what went down on "The Drive" in 610 Sports Radio.

ICYMI, Chiefs QB Patrick Mahomes joined #TheDrive for an exclusive one on one interview!

"I mean, you never know what's going on inside the team or the organization, but just watching how he's played the past few weeks, it did kind of confuse me at the team," Mahomes said. "But you never know. For me, I would've wanted to play and finish out the season no matter what our record was, but whatever the coach thought was best for the team, he did, and you have to back that as a guy on the team."

And according to Pederson, this was the move that he thought was best despite what the public reaction turned out to be, all things considered:

"We struggled miserably there in the third quarter to score and we had opportunities to score. I've got to do what I feel is in the best interest of the Philadelphia Eagles and the team to help us win the football game. Don't sit here and pin this on Nate Sudfeld or the decision to put him in the football game. Nate's an NFL quarterback and he's a good quarterback and he's done some great things for us. He was our backup in the Super Bowl for goodness sake. Perception, I don't get into perception a whole lot."

Hurts hasn't said much on the matter, but he didn't seem overly happy with how his rookie campaign ended.

“This will sit on my chest the entire offseason”

“We’re going to come back on a mission” pic.twitter.com/gQDAUpEkXb

Hurts knew the fix was in. Clearly dejected. Obviously says “it’s not right” and shakes his head. pic.twitter.com/rSZibS4HZn

One thing's for sure: Andy Reid and the Chiefs aren't going to have a quarterback or coaching dilemma for a long, long time with Patrick Mahomes at the helm and postseason success seemingly inevitable for years to come.