Former NFL quarterback and current NBC analyst Chris Simms revealed the top four names on his 2022 QB countdown Tuesday, and while the No. 1 and No. 2 are likely who you would expect them to be, the order may surprise some.

Long a Josh Allen supporter, Simms believes that the Buffalo Bills' quarterback has usurped Patrick Mahomes of the Kansas City Chiefs as the top player at his position in the sport.

"But Josh Allen is the best quarterback in the NFL right now, there is no doubt. He is the guy I would take right off the bat. No one is asked to do more for their team, or carry their team more on a weekly basis than Josh Allen.

"Again, out of the top four quarterbacks were talking about here, definitely the least talent around him, no doubt about it -- it's not even close, everybody.

Simms would go on to say that Allen is the second-best running quarterback in football to Lamar Jackson, a dangerous weapon that Sean McDermott and the Bills really like to lean into in the postseason.

Meanwhile, Mahomes came in at No. 2, with Simms acknowledging that he already believes that after just four seasons as a starter, Kansas City's quarterback is a first-ballot Hall of Famer and one of the best to ever play the position.

With that said, Simms was critical of Mahomes' play within the pocket a year ago.

The two, of course, met in the AFC Divisional Round last season, with Mahomes and the Chiefs winning perhaps the greatest game in NFL history 42-36 in overtime. 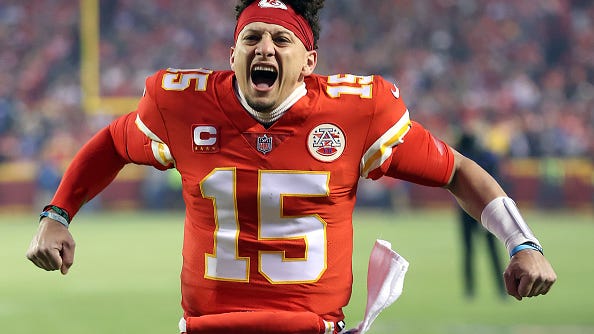