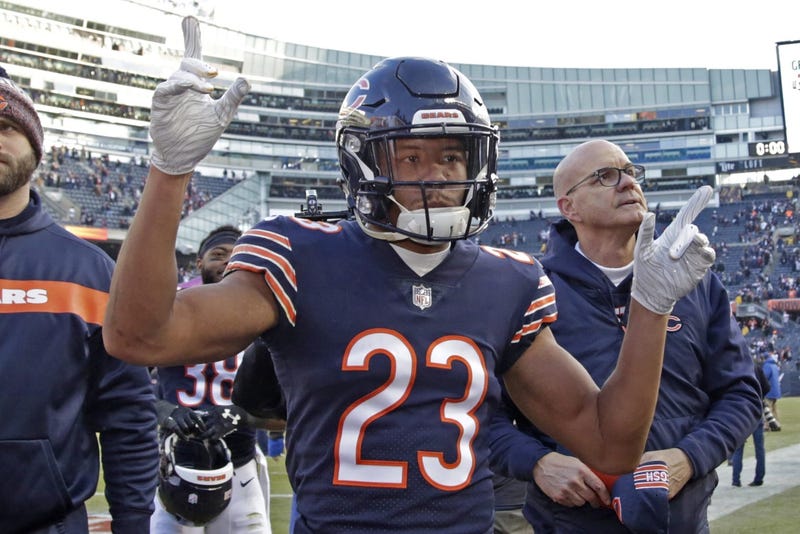 (670 The Score) The Bears (4-6) host the Giants (2-8) on Sunday at Soldier Field.
Kickoff is set for noon and can be heard on air on WBBM Newsradio 780 and 105.9 FM. You can also listen on desktop computers here.
670 The Score will have pregame coverage with Hub Arkush, Patrick Mannelly and Olin Kreutz starting at 9 a.m., which you can listen to here.
We've had plenty of Bears-Giants preview coverage, all of which you can find here.

Here are our game predictions from our on-air personalities, producers, writers and more. Tony Gill, Danny Parkins and Julie DiCaro are tied for the lead at 7-3, with a couple others trailing them.

The Giants have a porous defense and a quarterback who’s prone to turnovers. This feels like just what the Bears need. But would they dance in Club Dub after beating a struggling team?

I’m making my Bears-Giants pick under protest this week for two reasons. The first is that the game is going to be unwatchable. The second is that when my prediction was requested, I hadn't had adequate time to watch all the proper film — the game broadcast, the All-22 and Dorf on Golf (Tim Conway was hilarious). With those disclosures noted, I’m picking the Bears.

I’m banking on the Bears defense still giving a damn and scoring. Daniel Jones will give the ball to any Bear who asks for it. Even, I think I’d take him over Mitchell Trubisky.

I keep hearing people say this is a get-well game for the Bears. Don’t you think the Giants look at it similarly? Taffy pull goes to the home team.

At the time of this pick, I didn't know who the Bears quarterback is going to be Sunday. But the sad truth is it doesn’t matter. The Giants defense is worse than anything on the Bears, believe it or not.

There isn’t any joy in picking against the Bears because I’m a big fan. So I’m glad that the Giants are on the schedule this week, so I can be right doing this and enjoy the game too.

Boooooo! Boooooo! So the Bears can't call plays, pass, catch or stop the run. Does the opponent even matter? I'll be watching RedZone.

The Chicago Bears are bad, and we should all feel bad.

How much do the Bears actually love their coach? We’ll find out against a bad team and with little left to play for. Chase Daniel will lose to the Giants for the second year in a row, as I don’t think Trubisky plays. There will be a missed PAT by the Bears too.

There’s one sure loser in this game — the viewer.

The only thing dirtier than the Bears' offensive game planning is the streets of New York. They literally don't have alleys. The trash sits on the curb. It piles as high as some of our three-flats. That being said, I'm not sure Daniel Jones can even grow facial hair.