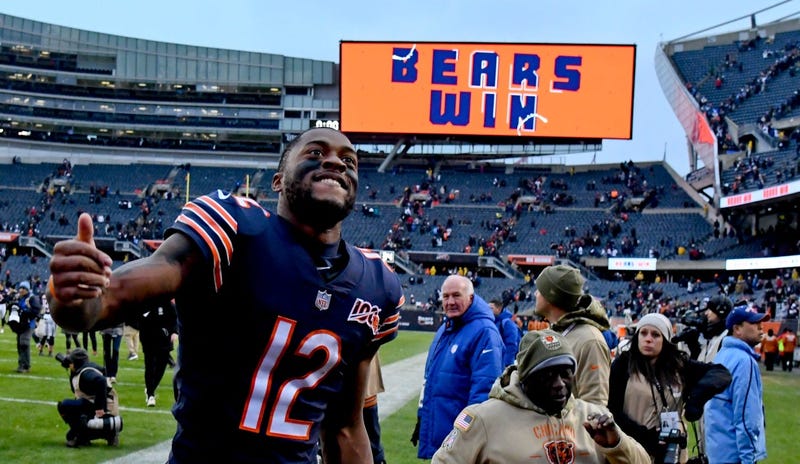 CHICAGO (670 The Score) -- During the difficult times of a four-game losing skid, the Bears kept the speakers and strobe lights of Club Dub ready. The most prominent part of the culture that coach Matt Nagy helped create couldn't leave this team.

Nagy didn't want losing to define the Bears. Instead, he hoped the struggles would inspire them back to victory.

"The message was, 'Don't take a win for granted,'" cornerback Prince Amukamara said, echoing the words of Nagy. "It's hard to win in this league. We're going to celebrate them."

On Sunday, the Bears danced in their locker room for the first time in six weeks, savoring their 20-13 win over the Lions at Soldier Field. Their offensive struggles continued, their defense lost another key starter, their playoff hopes improved only marginally and yet what their mind was on was the victory that had proved to be elusive.

The Bears made only incremental progress toward becoming the team they were believed to be, as the film session at Halas Hall on Tuesday will display many of the same mistakes they made in their four consecutive losses. The Bears offense managed only 226 yards, and Pat O'Donnell punted nine times. The defense allowed 357 yards to Lions backup quarterback Jeff Driskel, who started in place of the injured Matthew Stafford.

After so much went right for the Bears in their NFC North-winning 2018 season, far too much has gone wrong in 2019. The four straight losses tested the Bears but didn't break them.

"We're going to cherish this win and get back to work."

Bears quarterback Mitchell Trubisky entered the day after enduring yet another week of scrutiny. His inconsistent individual play has been be a major part of Chicago's disappointing season, and he can't answer the critics with words. Trubisky was reminded of that after he declared he wanted the televisions at Halas Hall turned off to silence the outside skeptics. He was crushed for those comments.

Trubisky can only answer the critics with his play. He had an uneven performance Sunday, though it will be remembered for his winning plays. He threw three touchdown passes on consecutive drives, finishing the game 16-of-23 for 173 yards and a 131 passer rating.

Trubisky acknowledged that winning can only help his confidence, which has been low during the Bears' struggles.

"When you go through a stretch like we did, it's tough," Trubisky said. "Days like today, you appreciate it a little bit more, just getting back to that feeling of winning. We just got to build off that and definitely don't take it for granted."

The Bears still believe they're the same team as in 2018, one that went 12-4 in the regular season and reached the playoffs during Nagy's first year in Chicago. To reach the postseason again in 2019, they'll need a great deal of good fortune, as their 4-5 record leaves them little margin for error.

Each of the Bears' remaining seven games will be a challenge, starting against the Rams in the Los Angeles Coliseum next Sunday. The Bears need to make major improvements to even have a chance at being a playoff team.

Before that, what the Bears needed first was a win -- to respond from their toughest stretch, to reinforce their culture and to reopen Club Dub.

They did just that Sunday.

"I feel like the natural thing is to feel sorry for yourself and you start pointing fingers," Amukamara said. "But we've been going by one of the mottos coach Nagy said, and it's 'trust in together.' Trust in your coaches, yourselves and your teammates. Stay together. That's what we did."