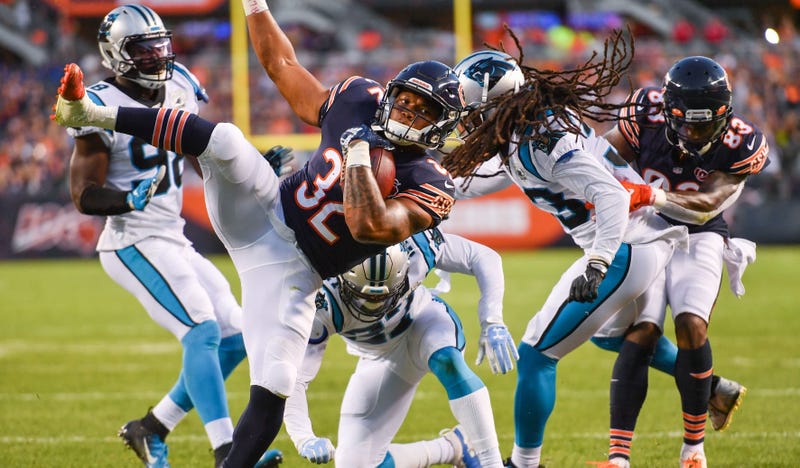 (670 The Score) We may not be seeing much of rookie running back David Montgomery in the Bears' preseason slate, but one expert has already witnessed enough to be supremely​ confident that the third-round pick is the next big thing at the position.

Paul Charchian of Fanball and KFAN in Minneapolis joined the Bernstein & McKnight Show on 670 The Score on Tuesday, and he was effusive in his projections of Montgomery's immediate success, already ranking him as the 10th-best fantasy running back in the entire NFL before he has even played a down of professional football.

"I love David Montgomery," Charchian said. "There's a chance Montgomery is so good, he simply creates a mandate to be used in almost all situations -- as a between-the-tackles runner, as an outside runner, as a goal-line runner and as a pass catcher. He's got really good hands. I think Montgomery is so far better than all the other alternatives a running back, and he can do so many things, that sooner or later you put the best guys on the field at the most important positions and it's going to be Montgomery most of the time. And because of that, I've got Montgomery way up at No. 10."

But it's not crazy to expect such a breakout to happen, as recent history portends rookie success. Being physically fresh and youthfully spry can mean big production in the right spot at the right time. The Giants' Saquon Barkley was second in the NFL in rushing yards in 2018, and the Chiefs' Kareem Hunt led the league as a rookie in 2017 after another rookie, Ezekiel Elliot, did the same with the Cowboys the year before. Hunt was also a third-rounder and working in the same offense into which Montgomery currently steps.

To hear Charchian tell it, the fit is just about ideal for fantasy players -- and not just due to that side of the ball.

"I really, really believe that he is going to far outpace every other rookie in production, and it is the kind of guy you can just go to war with every week," Charchian said. "David Montgomery -- a special back in an emerging offense. And the defense is so good, you never have to worry about a second-half situation where the Bears are down by 21 and they're not running the ball. Everything is set for success for Montgomery. I'm convinced it all translates. He's so much better than Jordan Howard, so give him those 280 touches and he'll more than live up to the top-10 billing."

There's a reason why Montgomery feels like something more than just a typical second-day selection, and part of it was that he was the Bears' first pick of the 2019 draft. It now also may be due to the fact that if some people are right, he's setting up to be a star from the moment the lights go on for real.

Dan Bernstein is a co-host of 670 The Score’s Bernstein & McKnight Show in midday. You can follow him on Twitter @Dan_Bernstein.