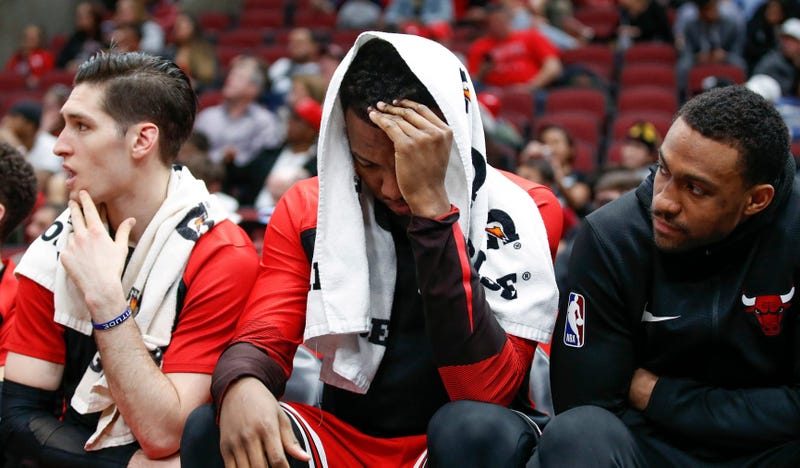 CHICAGO (670 The Score) -- On a night in which the spirit-less Bulls were throttled 112-84 by the Magic at the United Center, one of the many lowlights of Wednesday evening involved rookie starting center Wendell Carter Jr. watching most of the second half from the bench.

After going scoreless, shooting 0-of-5 and grabbing one rebound, Carter exited with 8:17 left in the third quarter after picking up his third foul. Those would be the statistics he would finish with, as coach Jim Boylen never reinserted Carter, later explaining that Carter needed to learn by observing.

“Didn’t need to put him back in,” Boylen said.

“Well, sometimes you learn by sitting too,” Boylen responded.

“He sees what’s going on in the game. Maybe you have some introspection. Maybe you realize, ‘I got to play my minutes better when I’m out there.’”

Carter played just 13:28 in all. Afterward, he took the high road in reacting to his benching.

“I didn’t come out with the correct edge myself,” Carter said when asked if he received an explanation. “I wasn’t playing well. That was just what happened. It’s not nothing that’s really bothering me. I don’t feel like it’s the reason we lost or anything like that. I just got to bring out a better edge every time we play.

“I just wasn’t affecting the game in any way. I wasn’t playing the best defense. I wasn’t making any shots. I wasn’t rebounding the ball well. That’s what I struggled with.”

Carter didn’t express frustration toward Boylen, only himself. He expressed an understanding of what transpired while emphasizing that all competitors want to be on the court as much as possible.

“It’s a very thin line,” Carter said. “It gets to the point where it’s like, ‘Let’s go, let’s go.’ I don’t feel like I brought it tonight. I couldn’t get into a good groove. I would’ve took myself out.”

Carter entered Wednesday having played three straight quality games after slumping for the first half of December. He struggled to pinpoint why he didn’t have it on this night, other than to reference that’s the way basketball goes sometimes.

When told of Boylen’s explanation that you can learn by being benched, Carter cited the manner in which the Magic were scoring and their offensive rebounding as two areas he honed in on from the sideline, saying he got a look at the way it was happening.

Boylen was resolute in his decision, staying true to his personality. He seemed altogether unconcerned about a cornerstone of the franchise's rebuild losing a chance for valuable on-court development while a veteran in Robin Lopez who's a trade/buyout candidate logged more minutes. Boylen also didn’t worry about losing trust from the 19-year-old Carter in any way.

Carter accepted blame to the end on a night in which the Bulls fell to 10-28 and allowed the Magic to shoot 57.9 percent, as opponent high against Chicago this season.

“I’m pretty hard on myself,” Carter said. “At the end of the day, I just want this team to be great. I feel like we have so many great young pieces on this team. I feel like we can really prosper as a team, but everybody has to know their role and what they’re supposed to be doing. And I know my role, and I didn’t do it to the best of my ability tonight.”