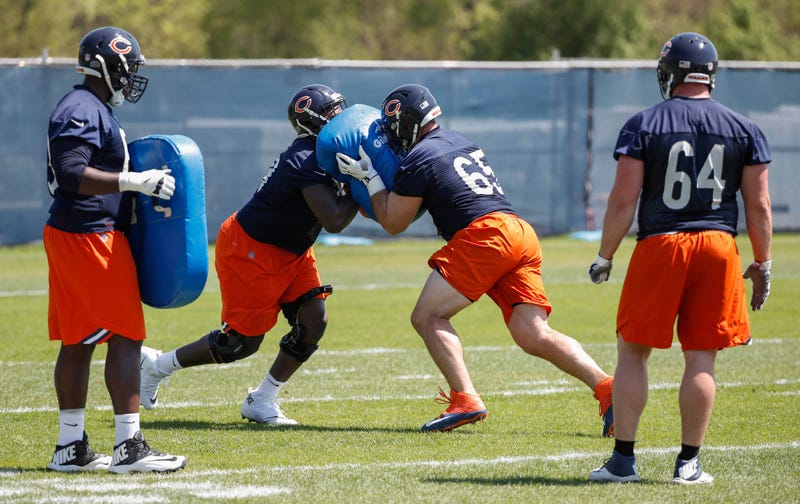 LAKE FOREST, Ill. (670 The Score) -- In showcasing growth as an NFL rookie and establishing himself as a starter, James Daniels proved enough to the Bears last season for them to feel comfortable giving him more responsibility.

It led to the team calling Daniels this past March and telling him he would be moving from guard to center beginning this offseason. There was no hesitation when Bears offensive line coach Harry Hiestand called. Daniels was in.

"I know that he's doing that to help the team, to help us become better," Daniels said. "I'm all for it."

A second-round pick in 2018, Daniels has found the adjustment back to his more natural position a seamless transition. Three-year starting center Cody Whitehair, now the Bears' left guard, has been helpful to Daniels' side.

A center at Iowa, Daniels started 10 games at left guard in 2018 after proving he was ready to play. Whitehair had established himself at center since arriving with the Bears as a rookie in 2016, but he has also played left guard in the NFL and manned tackle at Kansas State. The versatility is something the Bears value.

What ultimately led them to making this switch?

For Daniels, there are some familiar differences at his new position. He must lead the Bears to the line of scrimmage, read the defensive front, make necessary calls and then execute the snap.

Added focus is something Daniels knows he will need playing center.

"He’s doing a great job," quarterback Mitchell Trubisky said. "James, he’s very smart, so the transition’s been very easy for him so far. I would say the only difference this year is that I’m finally hearing him talk. He didn't talk much last year. Having him at center, we talk a lot more off the field and on the field as well. Hearing him make calls. Just that constant communication back and forth. It’s been great.

"I’ve kind of seen like a new side of him as well, because the position change has forced him to talk a little more, be more vocal and he’s doing a great job of it. He’s a very football intelligent player. It comes easy to him and obviously he played it in college, so it’s been a natural switch and it’s been going really well. Cody’s been doing a great job at guard, too."

The swap of Daniels and Whitehair is the biggest change for a Bears offensive line that returns all five starters from last season. After re-signing veteran tackle Bobby Massie this offseason, the team assured it would have the same protection back.

But even with that kind of continuity, the Bears were left believing this transition would fit them best.

"I just know the coaches believe in me playing center and Cody playing guard," Daniels said. "I'm ready to just do it."