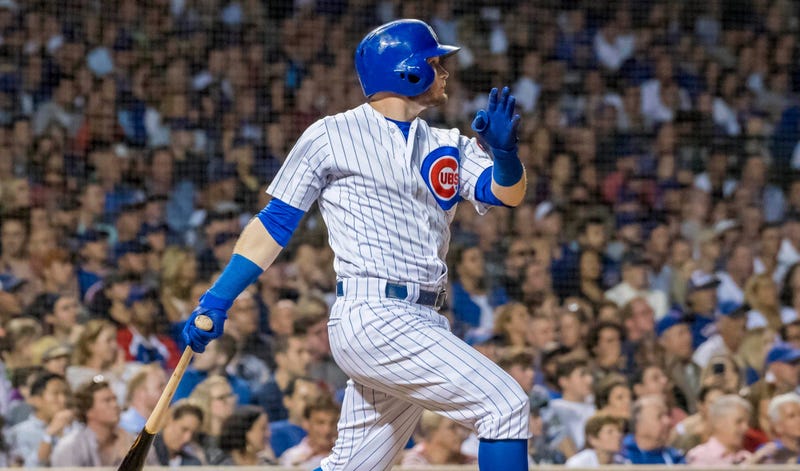 CHICAGO (670 The Score) -- During the early part of Ian Happ's season at Triple-A Iowa, Cubs manager Joe Maddon frequently checked in with text messages. He would send screengrabs of Happ's swing and offer whatever helpful advice he could find from the video.

But Maddon has held off his contact as of late, concerned he was only interfering with the struggling Happ, who was trying to regain his big league form.

"I thought maybe I'm getting in the way," Maddon said.

It's not just Maddon hoping that the 24-year-old Happ can figure it out in Iowa. The Cubs organization has been waiting ever since sending Happ to the minor leagues as they formed their Opening Day roster late in spring training.

The ideal response would've been Happ going on such a tear that he forced the Cubs' hands and ended up back in Chicago in short time. Instead, this has become a process of patience, as team president of baseball operations Theo Epstein has preached continued development.

While Maddon has been pleased to hear Happ has embraced the chance to improve -- "Everybody's talking about how wonderfully he's been handling all of this," Maddon said -- the Cubs are looking to see results.

Happ has seen spikes in production mixed with slumps this season -- a similar experience to his first two years in the big leagues. Maddon had come to appreciate the versatility of Happ, a switch-hitter who plays all three outfield positions plus second base and third base. Without another switch-hitting utility player in Ben Zobrist -- who has been on a personal leave of absence since May 8 -- the Cubs have missed Happ even more.

The Cubs opened the season with outfielder Mark Zagunis taking Happ's spot, though he had only 39 plate appearances in 29 games. Veteran Jim Adduci took Zagunis' spot and played just two games with five plate appearances. Three-time All-Star outfielder Carlos Gonzalez joined the team in June but has slashed .184/.319/.316 with a .635 OPS. Perhaps the next player who fills that roster spot will be acquired by trade.

Nearly a month away from the trade deadline, the Cubs could be coming to a crossroads with Happ, whose value may be best utilized in a deal. With few prospects available for the Cubs to trade, Happ could represent the right fit for a deal.

The prospect of a trade may lead the Cubs to keep Happ in the minors up until the July 31 deadline, enabling him the chance to continue development while protecting him from more pronounced struggles in the majors.

In an ideal world, Happ could give the Cubs the type of jolt that they've been seeking offensively, adding greater depth to Maddon's lineup and the kind of versatile presence they've been lacking. There just haven't been signs of that coming anytime soon.

For now, Maddon and many others in Chicago are hoping Happ can figure it out in Iowa.