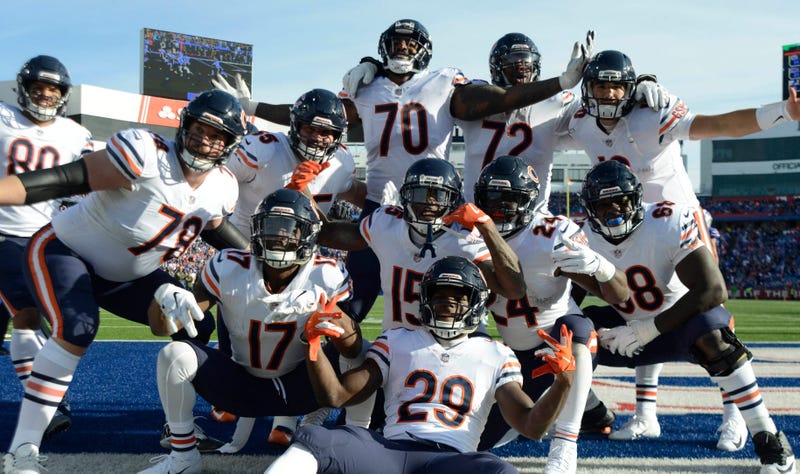 (670 The Score) There are 141 days until the Bears and Packers kick off the 2019 season under the lights of Soldier Field.

Coach Matt Nagy has said since the very sudden end of last season that his Bears are hungry for their next opportunity. While the wait for football may seem long, there is at least now a glimpse of what's to come in Chicago. The NFL officially unveiled its full 2019 schedule on Wednesday evening, including the Bears' regular-season slate for a new year.

What's ahead for the Bears this season? A difficult schedule -- at least on paper and in April -- as winning the NFC North crown last year means facing their fellow first-place finishers in the NFC. The Bears will face six teams that reached the playoffs a year ago, the challenge after emerging as a championship contender.

Let's look at the Bears' schedule from the opener to Week 17:

Note: All times listed are Central.

During the long NFL offseason, from April and the start of the workout program through the heat of training camp, the thought of kickoff to the season remains fresh in mind. The Bears will get an extra boost this offseason thinking ahead to the start of their regular season in primetime against the rival Packers.

There will be great intrigue surrounding the first game of the NFL season. It's Nagy vs. new Packers coach Matt LaFleur, third-year quarterback Mitchell Trubisky against seven-time Pro Bowl quarterback Aaron Rodgers, and the reigning NFC North champions against a team hungry to reclaim its place at the top. Bring it on.

The man who helped build the Bears defense as the league's best unit will now face off with his former team. It will be Vic Fangio, Chicago's former defensive coordinator, leading the Broncos as head coach against the Bears.

The Bears have nothing but fond feeling for the 60-year-old Fangio, a head coach for the first time. When he landed in Denver, they celebrated the accomplishment. But the sentiments will be thrown out the door as the Bears try to hand Fangio and his team a loss at Mile High Stadium.

Last season, the Redskins were 6-3 and a first-place team in November before the horrific leg injury to quarterback Alex Smith. It sent them on a tailspin to 7-9 and uncertainty moving forward.

Now, the Redskins will be led by veteran Case Keenum -- and perhaps will have a rookie quarterback waiting in the wings -- when the host the Bears in the season's third game. Whether Washington has a team capable of contending in 2019 is unclear at this point of the spring.

The Bears took care of business against the division rival Vikings in 2018, including with a thrilling victory in Chicago last November. This time, the Vikings will be coming to Soldier Field in late September as the NFC North landscape takes shape.

On paper, the Vikings seem to have a team capable of winning the division this season, but it will be up to quarterback Kirk Cousins elevating his play during his second year in Minnesota.

London is calling for the Bears, who will travel to England's capital city for the fifth regular-season game of the season and play the Raiders in what will be a designated road game for Chicago.

The Raiders have made major improvements to their roster after an ugly 2018 campaign. They now have superstar receiver Antonio Brown among other key additions. Of course, Oakland does not have All-Pro pass rusher Khalil Mack, whom they dealt to Chicago last September.

The Bears can shake off their jetlag from the London trip and spend the bye week recovering. While many at Halas Hall would prefer their time off to come later in the season -- when bodies are more beat up -- they will have to settle for the middle of October.

Well, won't this be fun? The Saints' high-flying offense will return to Chicago against a Bears defense that topped the NFL last season. This game will be personal to some with the Bears, including former Saints defensive lineman Akiem Hicks, a Pro Bowl player now in Chicago.

Should the Bears have their way, it will be a game that can help their positioning in the NFC standings. Of course, future Hall of Fame quarterback Drew Brees will have his say in this one, too.

From Brees to Rivers, the Bears will get their look at some of the game's best quarterbacks. Veteran Philip Rivers, 37, is leading his Chargers into Soldier Field a week after the Bears host the Saints.

The Chargers were one of the major surprises last season, finishing the campaign 12-4 and earning a wild-card spot. They are led on the other side of the football by premier pass rusher Joey Bosa, who has 28.5 sacks in 35 career games.

Here's a game in which the Bears should have no shortage of motivation. The Eagles ended Chicago's season in the playoffs, beating the Bears 16-15 in the wild-card game at Soldier Field this past January. Now, they will take the field in Philadelphia for a rematch.

That outcome should be fresh in mind as the Bears take to Lincoln Financial Field looking to move past the disappointment of how last season ended.

Part of why the Bears enjoyed such a turnaround in 2018 was their success in the division -- something that had been lacking in recent years. Chicago finished out 5-1 against its division rivals, vaulting to the top as champions.

The Bears should be favorites against the Lions as they take the field in Chicago, and this should be a game they win. If Chicago has plans on repeating as NFC North champions, it can't lose these games.

The Bears enjoyed their primetime statement last December at Soldier Field, holding the Rams' offense to just six points and earning an important victory. But this will be different as the Bears travel to Los Angeles and face Sean McVay's team in a rough road test, once again in primetime.

We'll see what the Rams come back with in 2019 after their disappointing loss in the Super Bowl. You better believe that outcome stuck with McVay this offseason.

It will be a rematch for the Bears against one of the four teams that beat them in 2018, this one a surprising result. The Giants stumbled their way to 5-11 last year and have come back with plenty of question marks.

Will Eli Manning be their quarterback in Chicago for this game? How will the Giants look without Odell Beckham Jr. in their offense? On paper, this seems like a game the Bears should win -- so long as they can contain Saquon Barkley.

Once again, the Bears will be spending Thanksgiving Day in Detroit as they take on the Lions in their holiday classic game at Ford Field. They will be doing so with a familiarity having played the Lions just three weeks earlier.

The Bears should be ready for what is always a terrific atmosphere at Ford Field for the Thanksgiving classic. They will also be preparing on short rest, something they successfully adjusted to last year.

The Bears will have to alter their preparation schedule with consecutive Thursday night contests on the schedule. They will be hosting the defending NFC East champion Cowboys on yet another Thursday game, this one back at Soldier Field.

Fortunately for the Bears, they are experienced with adjusting their game week schedule after 2018 and should be able to handle this one well, too.

For a second straight year, the Bears will open up with the Packers and play them again in the 15th game. This time, they will be traveling up to Green Bay to take on the Packers in what could once again be a critical game for the division title.

Can the Bears once again take the NFC North by beating the Packers? Well, that's a very optimistic thought. A lot would have to go right leading up to this contest.

Remember how the Bears were initially scheduled for just two primetime games last season? Well, now there's great interest in Chicago's team, which has the attention of the national networks.

This game will be especially exciting as Nagy and the Bears take on his mentor, Andy Reid and his Chiefs, in another Sunday night contest at Soldier Field. On paper, these appear to be two teams with high championship hopes for 2019.

For the fourth straight year, the Bears will be closing their regular season in Minneapolis. Last season brought unique circumstances as the Bears played for the win against the Vikings despite having already clinched seeding in the playoffs.

Given how tough the NFC North should be this season, it will be fascinating to see what the stakes are for this game as the Bears and Vikings meet again.

Predicting the season filled with so much parity is a silly exercise in April. These games aren't played on paper, as previously mentioned, and that's why we watch.

What's clear is that the Bears have quite the challenge ahead of them in 2019. While there will be surprises good and bad around the league -- and some listed on the Bears' schedule -- a quick overview of Chicago's opponents this season shows the difficulty in store.

Six of the Bears' foes this year were in the playoffs last year, and there may be six teams bound for the postseason once again. But this is the task provided by the NFL, and what a division winner must face. You're positioned against the best in the league and challenged to find that success once again.

The Bears will gladly embrace what's in front of them knowing well it's part of the respect that comes with their NFC North title last season. The great teams of this league have a way of outlasting their tough competition and working back to the playoffs.

Uncrumple the aforementioned paper and you're reminded how good the Bears can be in 2019 because of the youth and talent on this roster. General manager Ryan Pace and his brass have done an excellent job of assuring Chicago can contend for the next several years.

This 2019 schedule will be tough, and the Bears wouldn't have it any other way.