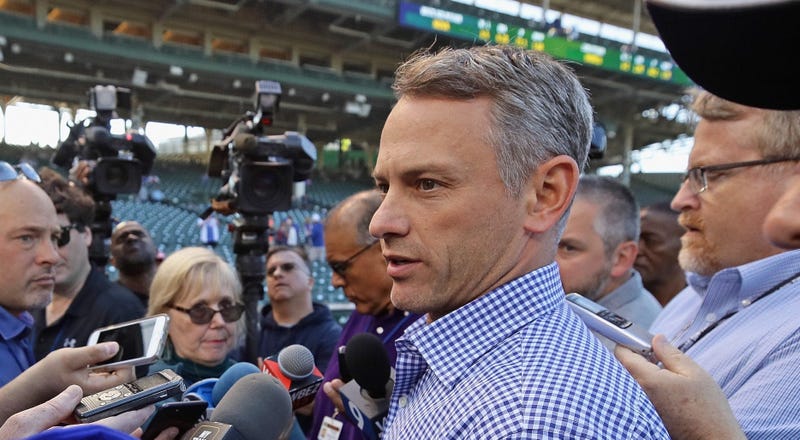 (670 The Score) As the Cubs' mediocre overall play and pronounced struggles with runners in scoring position continue, general manager Jed Hoyer acknowledged Thursday that the organization will "certainly look outside for answers" to their offensive inconsistencies.

Hoyer couched that by emphasizing the Cubs still believe strongly in their current group but added a spark could really help.

"It's a good question, a valid question," Hoyer said on the Bernstein & McKnight Show when asked if the team has reached the point of looking at different solutions in the lineup. "I would still say this is a group that has won more games than any team really since we've been put together. So there are a lot of positives. There are some areas of frustration, like we just discussed. We haven't been very good in those (situational hitting spots). I do think we'll certainly look outside for answers. I think that whether we find those answers is a question. I think the trade market could be tough, and we're not going to make change for change's sake. But this is an offense that probably doesn't have quite the depth that (it used to have). Obviously, we certainly miss (Ben Zobrist's) presence, his quality at-bats, his on-base skills. We wouldn't be doing our job to not do our due diligence, to not think about those things externally. Whether they happen or not, I'm not sure.

"That said, I don't think that says that we don't have confidence in our guys. I think it says that's our job, to think about everything we can. If an external move makes sense to jump-start the offense, maybe we'll do that."

While the Cubs rank fifth in the National League in scoring just more than 5.0 runs per game, they're hitting .243 with runners in scoring position, a mark that ranks last in the NL. That has led to frustration, Hoyer said, and a tendency of late to lose some close games after failing to capitalize on opportunities.

The 38-year-old Zobrist would usually be a helpful contributor in such situations, but he has been on a personal leave of absence from the Cubs since early May as he goes through divorce proceedings.

The Cubs have left the door open for his return, but are they optimistic that will actually happen?

"I feel the same way I have -- we certainly hope he does," Hoyer said. "That's ultimately on him, but we are hopeful. I think in a lot of ways, some of the struggles that we've had, it helps you appreciate the mature at-bat he brings to the lineup. He does get on base. He grinds at-bats and he studies pitchers. We certainly miss that. There's no doubt. But the most important thing at this point is he and his family are in a good places."