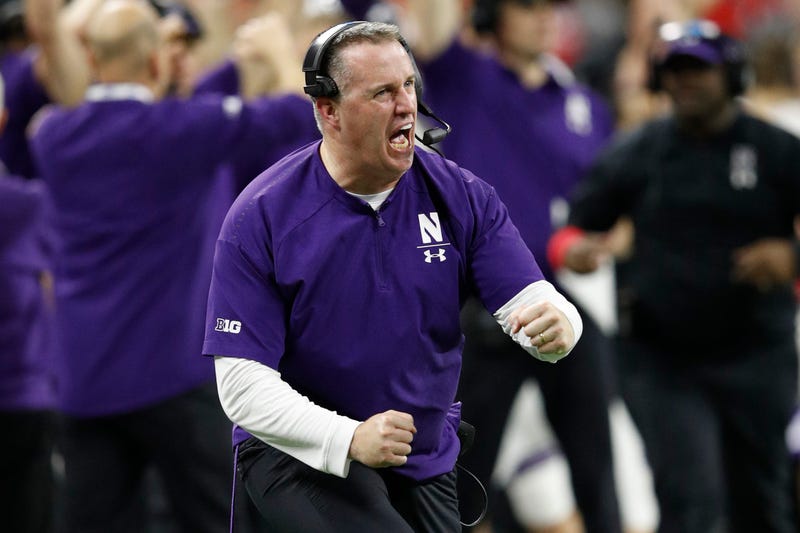 EVANSTON, Ill. (670 The Score) -- When Pat Fitzgerald first walked onto Northwestern's campus as a freshman in 1993, he was joining a football program beginning to dream big.

Northwestern had gone winless just four years before Fitzgerald's freshman year and had won eight games in the ensuing three seasons, but then-coach Gary Barnett instilled Rose Bowl hopes in his team. Sure enough, the purple made it to Pasadena in Fitzgerald's junior year and inspired hope for what the program could ultimately become.

Nearly a quarter-century later, Fitzgerald is entering his 14th season as head coach of his alma mater and many of those dreams have become a reality. Northwestern has established itself as a perennial Big Ten contender, and the Rose Bowl isn't a faint hope anymore but instead the goal.

These days, Northwestern calls the $270-million Walter Athletics Center its home. The state-of-the-art lakeside facility had its ribbon cutting last August and has served as not only a catalyst for growth in the program but also a monument of how far Northwestern has come.

Northwestern has grown along with Fitzgerald, called upon as head coach at age 31 after the sudden passing of Randy Walker in June 2006. He's now 44, and only part of him is still a linebackers coach at heart.

Fitzgerald is 96-70 as head coach of Northwestern and was named the Big Ten Coach of the Year in 2018 as the Wildcats won the Big Ten West crown and played in their first conference championship game. Northwestern was down a touchdown with less than 10 minutes remaining in the fourth quarter before Ohio State pulled away for a 45-24 win.

It was the closest Northwestern had been to returning to the Rose Bowl since January 1996. The program has won a combined 36 games over the last four seasons, but Fitzgerald isn't letting anyone get comfortable with the recent success.

Winning championships is the goal now for Northwestern.

"We're not going to hide from our goals."

It's why on New Year's Eve this past year, after Northwestern scored 28 points in the third quarter for a 31-20 comeback win over Utah in the Holiday Bowl, Fitzgerald stood on a podium in the pouring rain and declared his commitment to the program. There are still greater heights to reach.

Fitzgerald had been targeted by the Green Bay Packers to interview for their head coaching vacancy. Team president Mark Murphy was the athletic director who in 2006 promoted Fitzgerald after the passing of Walker. He now wanted Fitzgerald to lead the Packers back to prominence.

Calls for Fitzgerald to leave Northwestern for greener pastures come every year. Michigan hoped to interview him in January 2011. USC and Texas wanted to explore his fit in the fall of 2013. The Cleveland Browns have expressed interest on multiple occasions. Fitzgerald's longtime agent, Bryan Harlan, has politely declined all job requests on Fitzgerald's behalf.

Many coaching agents serve as mouthpieces for their clients' interest. Harlan, who declined to be interviewed for this story, is the man who diffuses the outside interest Fitzgerald receives.

He doesn't want to coach anywhere else.

"My guys are in their mid 30s that I started with as their head coach (in 2006)," Fitzgerald said. "To see them be great fathers, productive members of their communities and great husbands is what it's all about. Those other opportunities, I can't control what people say. But we can just control our commitment. I think we've made that pretty evident.

"My commitment is to be here. I'd love to have the opportunity to have my kids go to the same grade schools, the same high schools and be around these types of players. For my sons, our players are their role models. I wouldn't want our (children) to look up to no other group of guys than our guys.

"I just really think I fit. The values of the university fit what I believe in. Hopefully they feel as strongly."

Northwestern has matched Fitzgerald's commitment to building a championship program. After he passed on interest from Michigan in 2011, Fitzgerald was given a 10-year contract extension and the university began planning its new lakeside building -- setting out with the goal to build the best football facility in all of college athletics. Along with school president Morton Schapiro and athletic director Jim Phillips, Northwestern has pushed to make this all work.

Fitzgerald's current deal runs through 2026 and pays him more than $3.6 million annually, which put him 31st in salary among head coaches in college football in 2018, according to USA Today. He's "grateful" that Northwestern has made the commitment mutual.

There's unmatched comfort for Fitzgerald, who met his wife of 19 years, Stacy, when they were students at Carl Sandburg High School. They dated through college as Stacy attended Loyola. Now, the Fitzgeralds have three sons -- Jack, Ryan and Brendan -- and live a few miles from Northwestern's campus in Northfield.

Many coaches are moving over and over again, uprooting their families from one job to the next. For Fitzgerald and his family, there's no place like home. The prestige of a greater job or allure to a bigger paycheck can't replace that.

And if Fitzgerald is lucky enough, he hopes to some day coach his sons as Wildcats.

But not before Northwestern can reach its championship hopes.

"Do I think we're close? Yeah, man, I think we're really close," Fitzgerald said. "But that linebacker mentality still hasn't left me. We're not going to knock nicely. We're going to go running right through that door with everything we got. That's what we're working relentlessly to do.

"This is my dream job. There's no reason why I'd want to coach anywhere else."