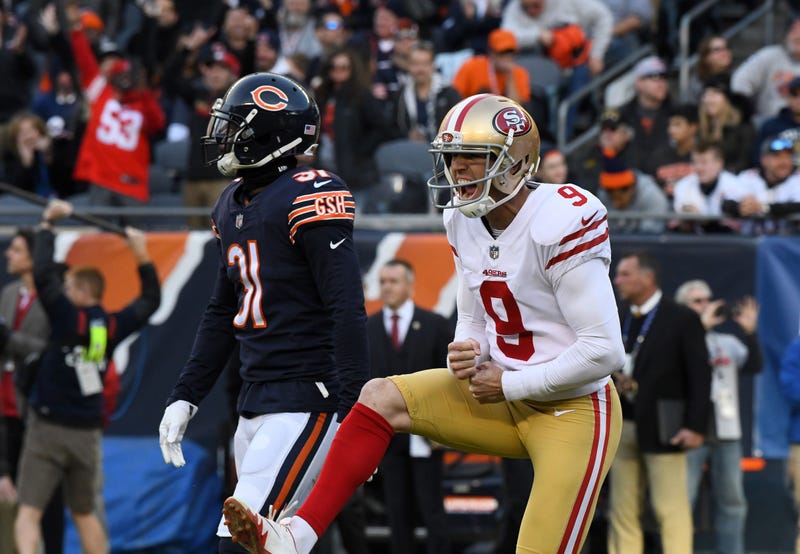 (670 The Score) Veteran kicker Robbie Gould, the Bears' all-time leading scorer, is hoping to find in free agency the best fit for his family, a contract of at least three years and a winning team.

Will that opportunity come with the Bears? Gould was asked about that on 670 The Score in an appearance with Zach Zaidman and Tom Thayer on Sunday evening.

"I can't answer that question," Gould said. "It's really out of my control at this point. I have only the exclusive rights to talk to the San Francisco 49ers right now. They're the only team that can get a deal done with me before free agency.

"When that March 11 deadline opens up and hits and the tampering period window opens, it's kind of a free-for-all. You're trying to make the decision that's best for your family and what fits where you want to go for the next part of your career.

"Cody (Parkey) is obviously the kicker for the Chicago Bears. They have a lot things they would have to do in order for it to work. Those are all things, you never know what's going to happen. We're all ears if we get to that March 11 time and we'll take it in stride. We'd definitely consider all opportunities when we get to that free agent part, for sure."

The 36-year-old Gould has hit 82 of his 85 field-goal attempts since being released by the Bears in September 2016. He joined the Giants later that season and signed a two-year contract with the 49ers two seasons ago.

Bears general manager Ryan Pace has said he will seek competition for Parkey, who was 23-of-30 on field-goal attempts in 2018. His struggles included missing a game-winning 52-yard field goal in an eventual loss at Miami on Oct. 14 and missing four kicks -- two field goals and two extra points -- off the uprights in in a win against Detroit at Soldier Field on Nov. 11. Had the Bears won one more regular-season game, they would've earned a first-round bye in the playoffs.

Instead, they played the Eagles in the wild-card round, and Parkey missed a game-winning 43-yard field goal off the left upright and the bottom crossbar in the waning seconds of a 16-15 loss.

"I definitely feel for Cody Parkey and kind of what he went through," said Gould, who attended that game with his family.

Signed to a four-year contract last offseason, Parkey made matters worse when he appeared on the "Today Show" five days after the season-ending loss -- a move that coach Matt Nagy referred to as not a "'we' thing."

The Bears have already signed kicker Redford Jones to a reserve/future contract in their effort to bring in the competition that Pace promised.

Gould explained that he has reinvented himself as a kicker since being released by the Bears, altering his footwork and refining his focus. It led Gould to the best kicking stretch of his career -- and just in time for free agency.

"Well my family is the most important thing," Gould said. "Obviously, my kids are older; they're 5, 3 and 14 weeks old. I have some kids that are in school.

"Obviously, a long-term contract is something that I'd like to have. And then it comes down to, I want to win. I want to find the best place to give myself the opportunity to win the Super Bowl. So, there's a handful of things that I'll look into.

"I've made calculated decisions my whole career. I'm going to do the same thing whenever this decision that we have to make comes up."